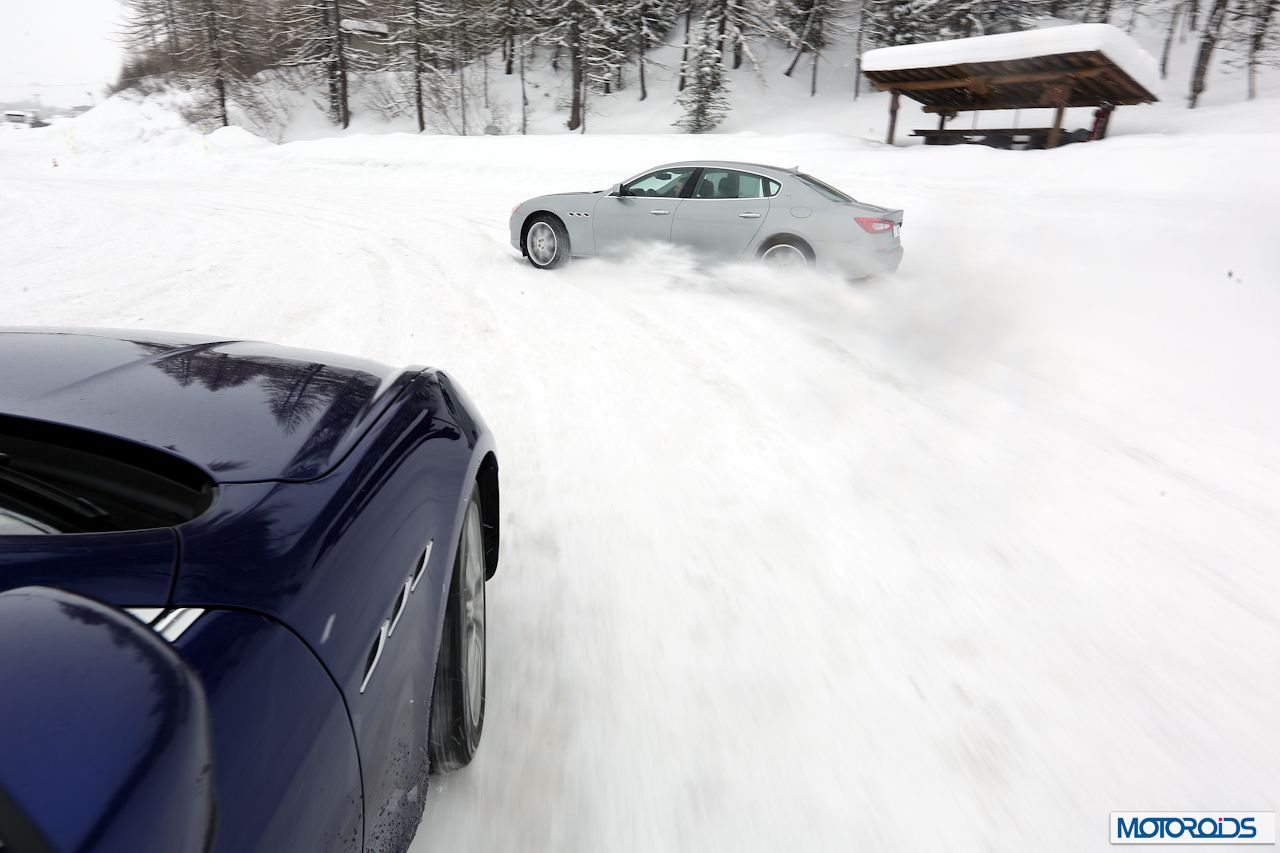 It took Maserati 100 years to adopt AWD technology. Few days ago, the Modena based company invited us to test the Q4 versions of the Ghibli and Quattroporte on snow for the very first time. Here’s our first hand experience of the Maserati Q4 AWD tech on snow…

How does it feel driving an AWD, 410 bhp Maserati on snow and ice with Pirelli Sottozero – street legal winter tyres with no studs? 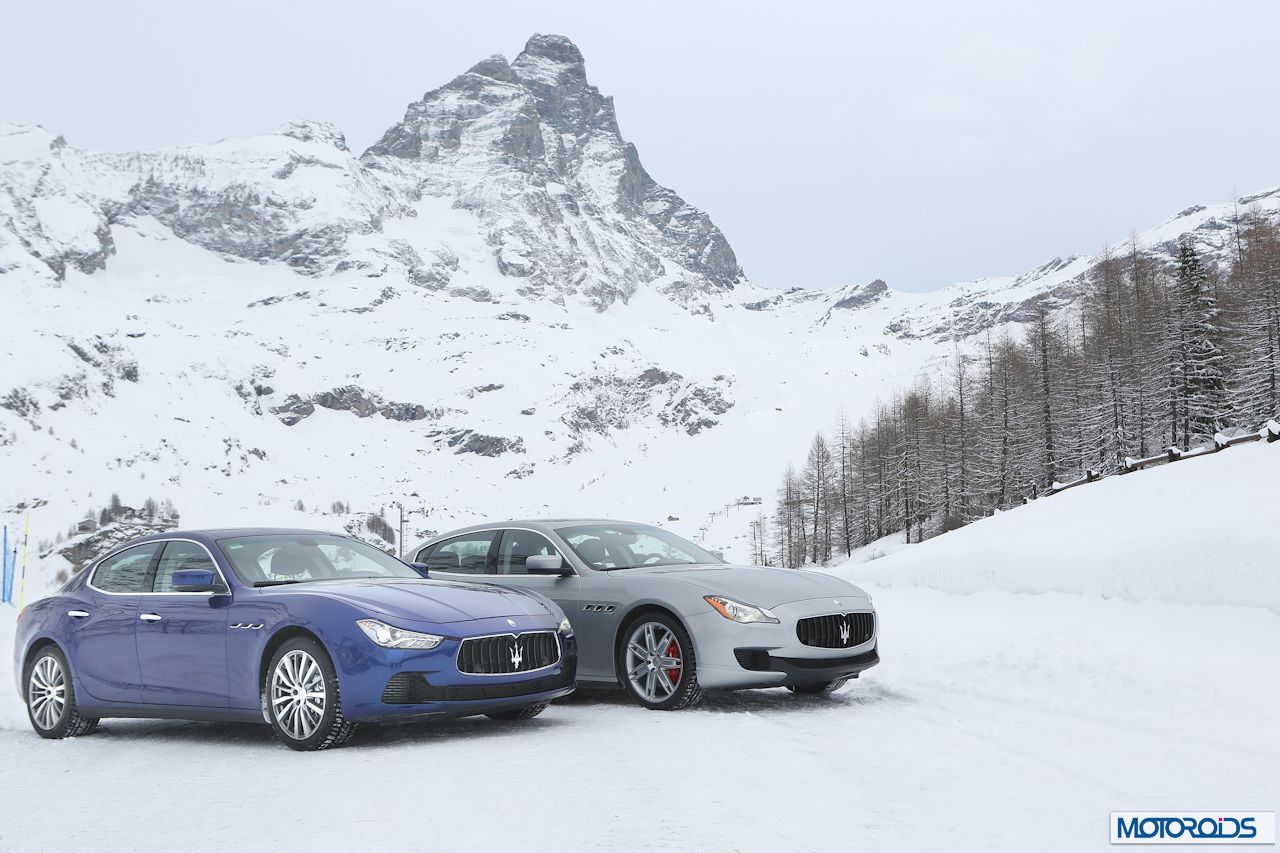 Maserati offered to selected journalists from around the world an exciting experience. The test drive base was in Cervinia, a chic ski resort on 2050 meters in the majestic Aosta valley, 120 km north of Torino.

We drove the Italian sedans on a 80 km route, on mixed – wet/snow – mountain roads and then we tested them in the longest, permanent snow track in Europe. There we took some ice driving lessons from two Italian rally drivers, Alex Fiorio and Luca Rossetti.

Rally fans should remember Fiorio. He is the son of Cesare – former Lancia and Ferrari team manager – and a strong rally talent in the 80’s. Alex became in 1987 the first Group N World Champion in history and in the following few years he drove a Jolly Club prepared Lancia Delta Integrale with remarkable success (he lost the title to Miki Biasion only in the last event in ’89). 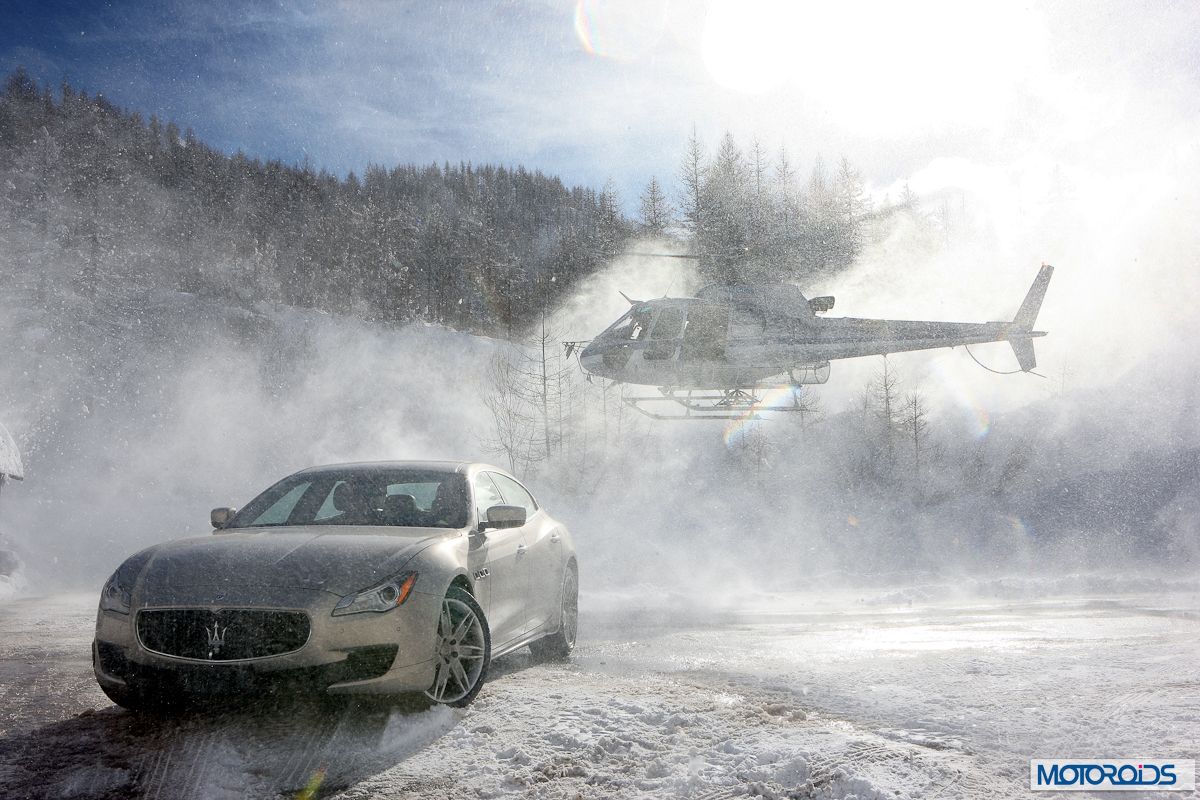 Luca – “ROX” – Rossetti has competed on top level in the last five years. He won the Italian and the European Championship in 2008 and became European Champion in 2010 and 2011. Both rallymen are masters of drifting, patient instructors and very funny guys to have a chat with!

Among the Maserati people there were Federico Landini and Benedetto Orvietani -two chief engineers – both ex Ferrari staff – in charge of developing the twin luxury sedans. Both guys are amazingly analytical when they talk about biturbo engines, AWD systems and advanced car electronics. 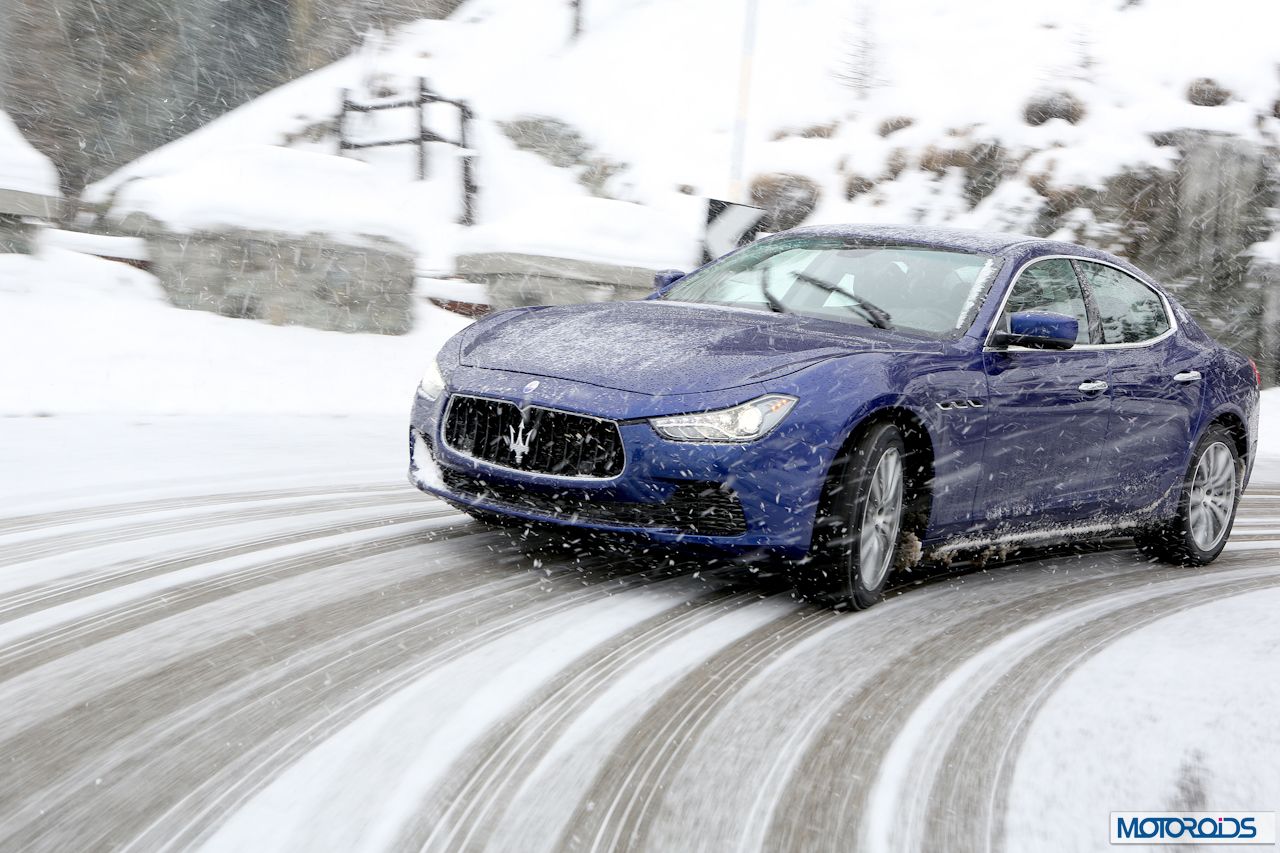 They are passionate when they describe Maserati technology as if they’re talking about Italian women, art and pasta! Talking about their approach on 4×4 Landini says: “our aim was to preserve the rear wheel character of a Maserati during the development of the Q4 versions and at the same time to improve handling on the limit of adherence on dry, wet or snowy road”. 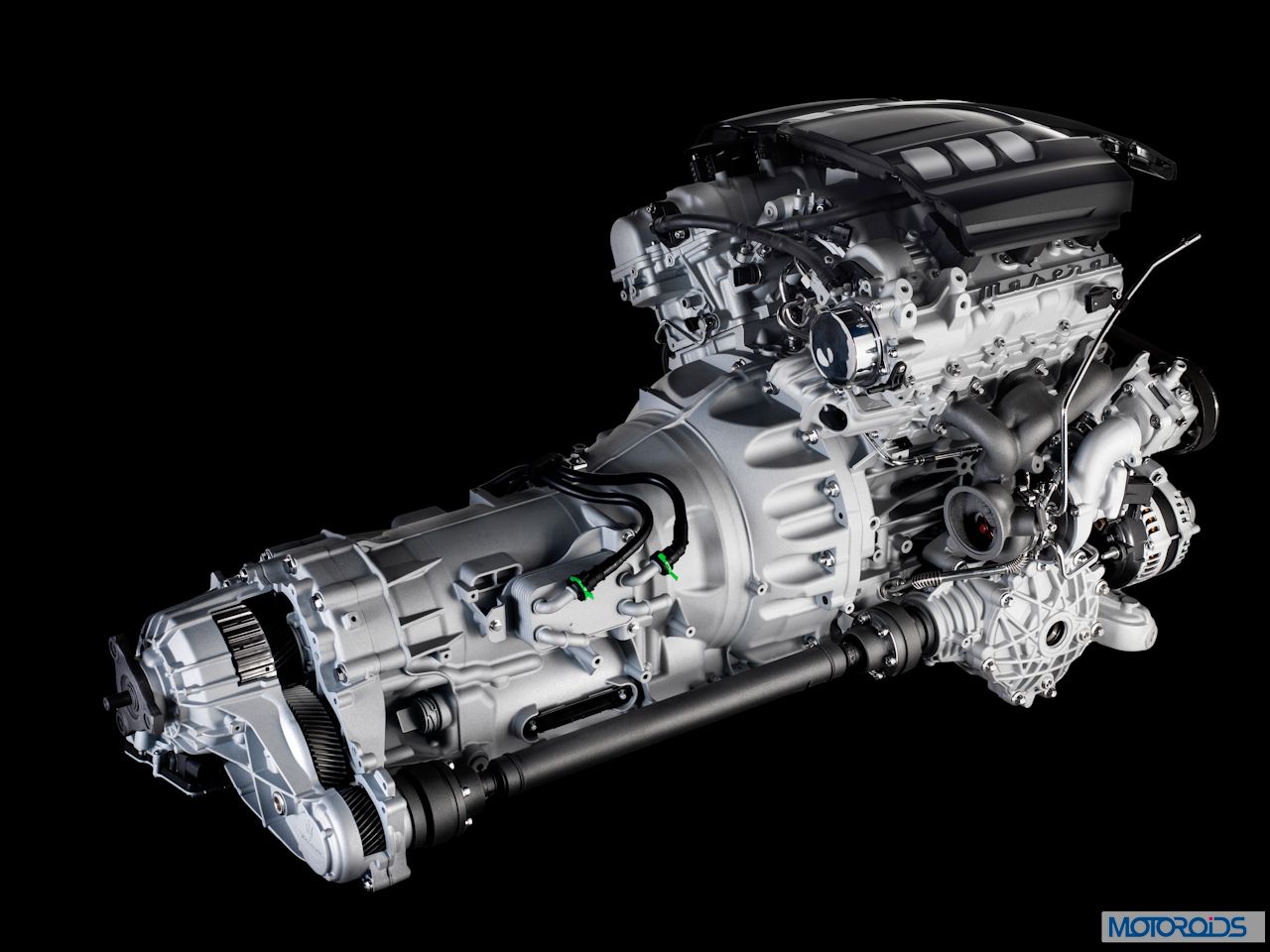 Orvietani explains why Maserati didn’t install a third differential like Audi does on its Quattro versions: “a system like this is not good enough for sports cars equipped with limited slip differential on the rear axle, the kinds of Quattroporte and Ghibli. The reason is that with a three diff system it is very difficult to refine drivability on the absolute limit. Our choice was conscious and without any compromises”, says former Ferrari engineer. 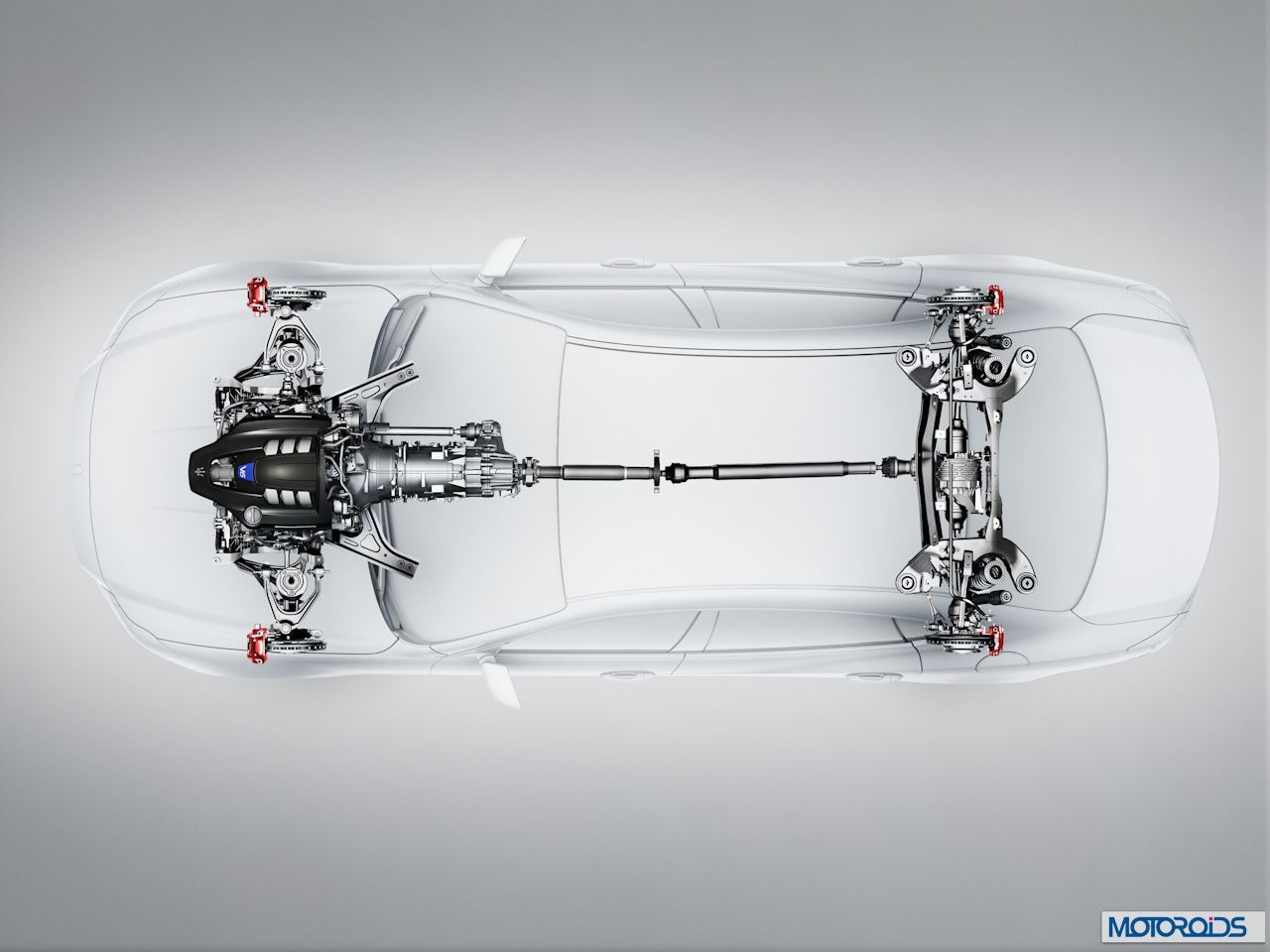 To achieve 100% Maserati handling quality on their Q4 versions, the Italians installed a central transfer case with an electronically controlled, multidisc clutch in oil bath. The clutch is developed by Austrian Magna Powertrain.

Under normal conditions, power is transmitted to the rear axle like in every RWD Maserati where a 25% limited slip differential distributes power to each wheel. When rear wheels loose traction, power is transferred to the front axle. 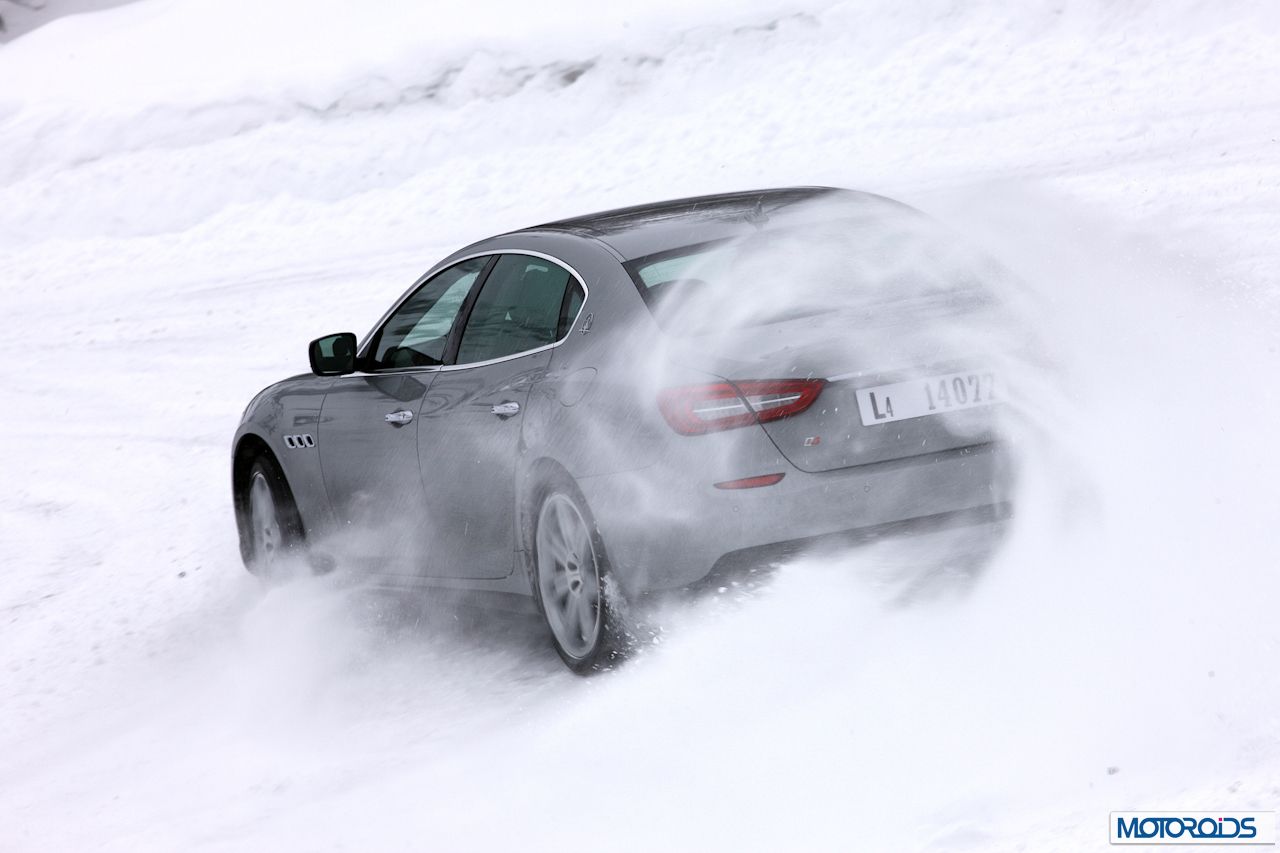 Power distribution to the front varies automatically from 0% to 50% in a constant, progressive way in just 100ms! The system receives information from an array of sensors for steering wheel angle, longitudinal and lateral acceleration, yaw rate, accelerator position etc. The electronic unit cooperates with MSP – the Maserati Stability Program – that can be easily deactivated by the driver. 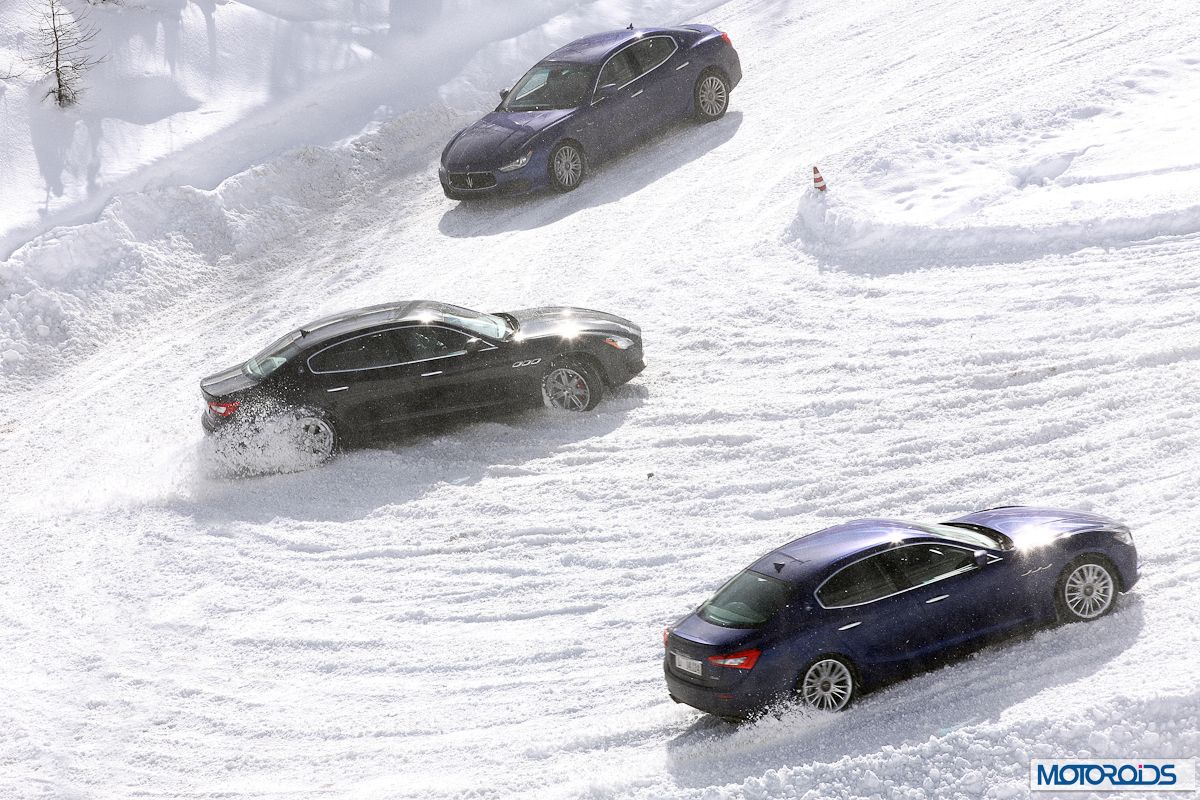 The result is that All Wheel Drive hasn’t altered the sporty character of Quattroporte and Ghibli. The Q4 system adds only 60 kilos to the cars but weight distribution remains ideal at 50-50%. The engine oil sump is redesigned for both models to make space for the front axle.

On the road, you can see the difference from a rear wheel Maserati, only when the powerful V6 Biturbo brings rear wheels to their limit of adherence. Instantly you feel the power getting to the front wheel – a reaction that gives extra confidence on wet surface, even if you had previously deactivated MSP. 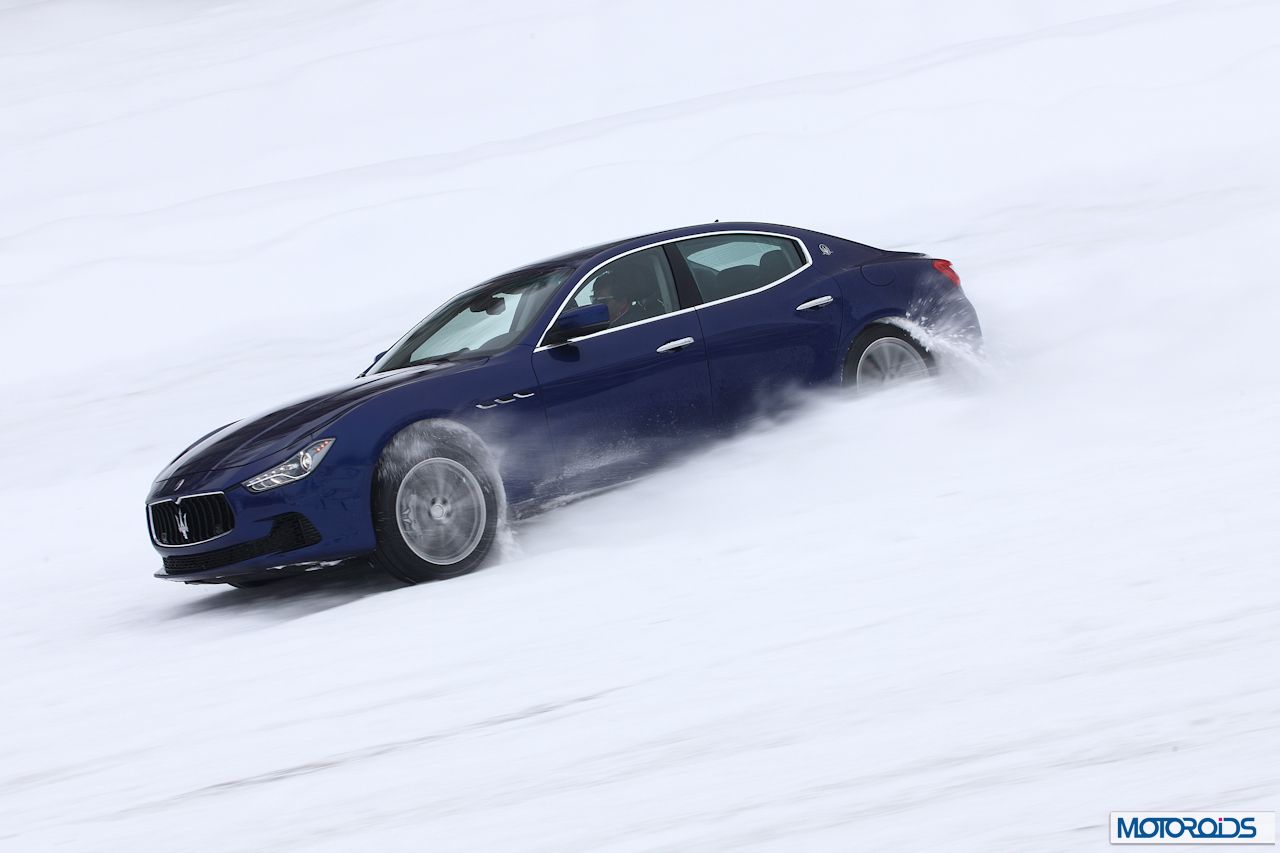 On the snow track, both Maserati Q4s are predictable and fun to drive despite their imperial proportions and almost two ton weight. Let me remind you that the Ghibli is 5 meters long and Quattroporte stands at 5.3 meters – a real limo “on the rocks”!

Maserati people considered fitting studded tyres for this test but they preferred opting for the standard Pirelli Sottozero winter tyres. Be reminded that studded tires are illegal in most European countries. This was a realistic choice rather than one that would enhance the handling of the Italian cars. 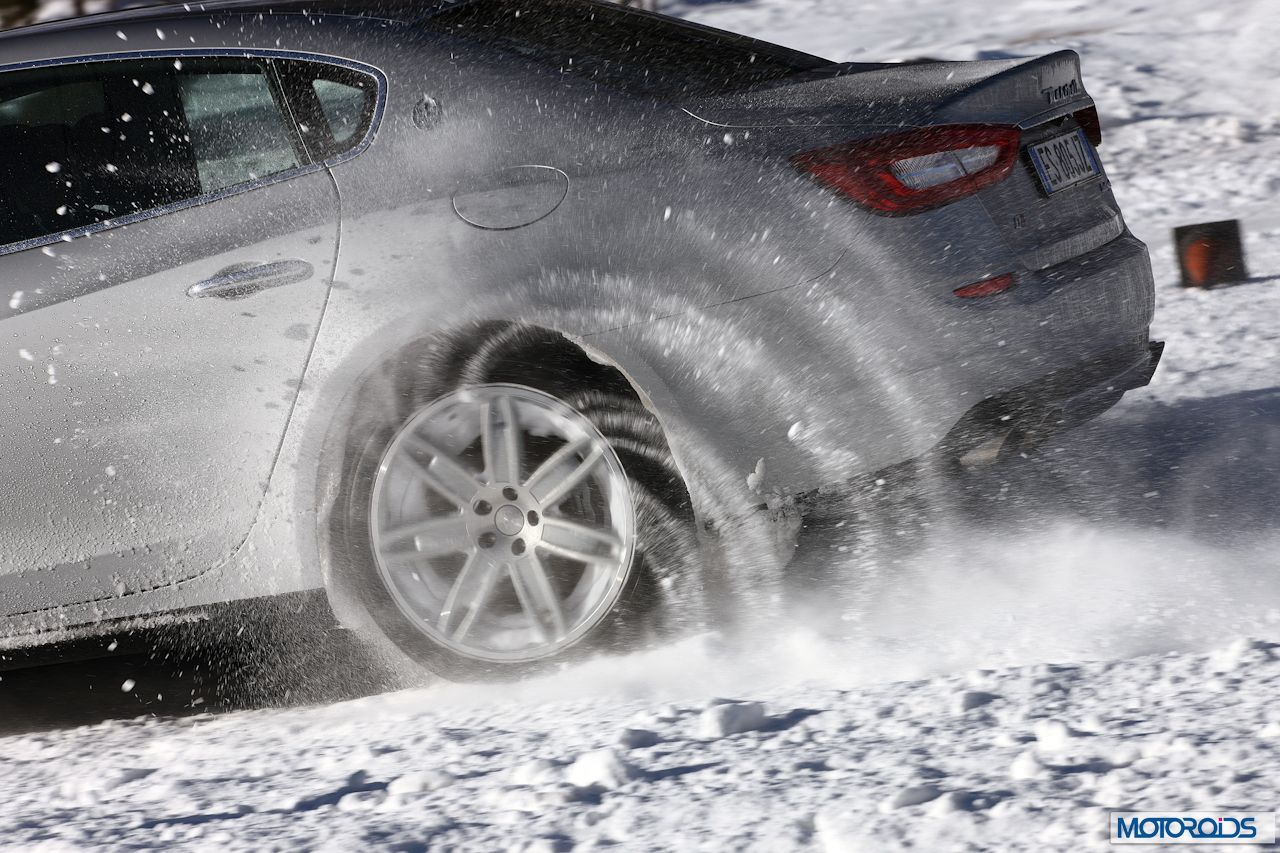 When the MSP is activated and the I.C.E. mode is selected (it reads like “ice” but means Increased Control & Efficiency) you can actually travel on snow safely despite the 410 Italian bhp and 550 Nm of torque under your right foot. The accelerator response is progressive and gives you time to feel the power transmitted on all wheels.

In the instrument panel, the central display includes a power distribution mode, where you can see on real time the percentage of power transmitted to either axle. Traction from standing still on soft snow is impressive: we tested a launch on a 20 degree uphill section of the track and the car had no problems to depart fast. 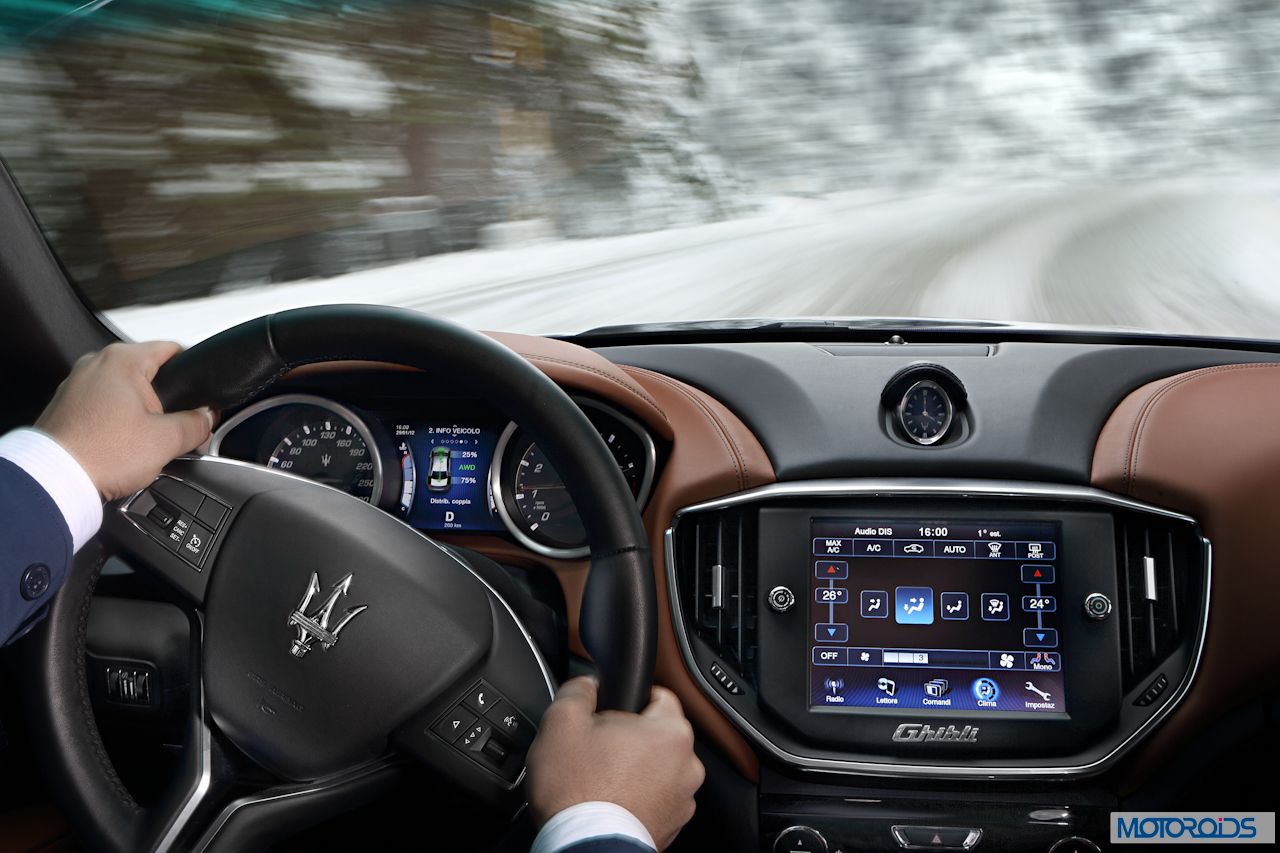 The real snow Walzer dance starts when you press the SPORT button on the central console and deactivate the MSP. Accelerator response is swifter so when you press hard your right foot, the V6 biturbo roars like a snow lion and the Ghibli drifts impressively with the first three gears in the automatic, 8 gear ZF. The longer sister is even more dramatic on the corner, demonstrating more oversteering with open gas.

Both Italian limos are exceptionally controllable thanks to the swift steering wheel but you have to behave yourself considering the weight, the size and the power of the cars, especially when soft snow transforms to hard ice. 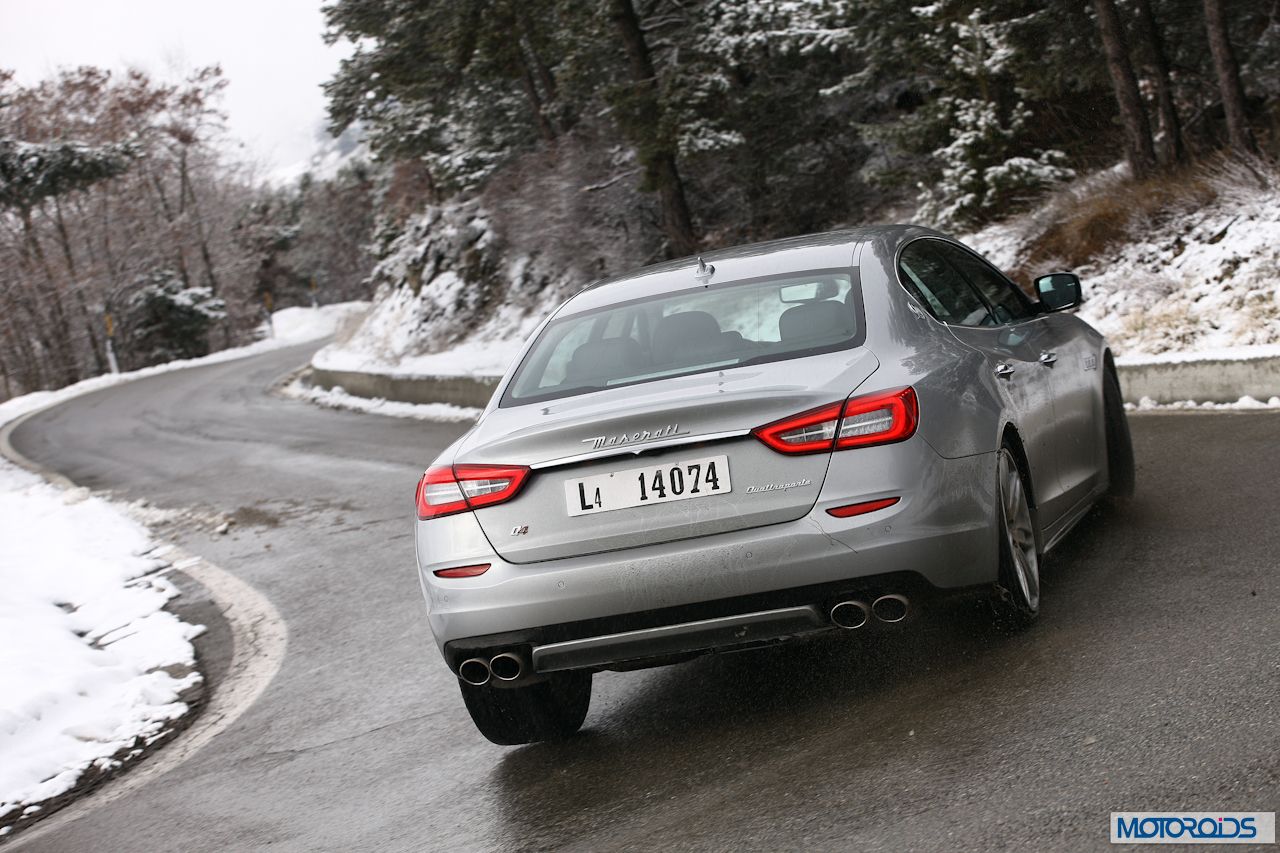 Proportions weight and normal winter tyres show their limits during braking rather than in the corner, where power can be a solution. The only danger in this environment was to arrive too fast on the corner and end up going straight. As simple as that! 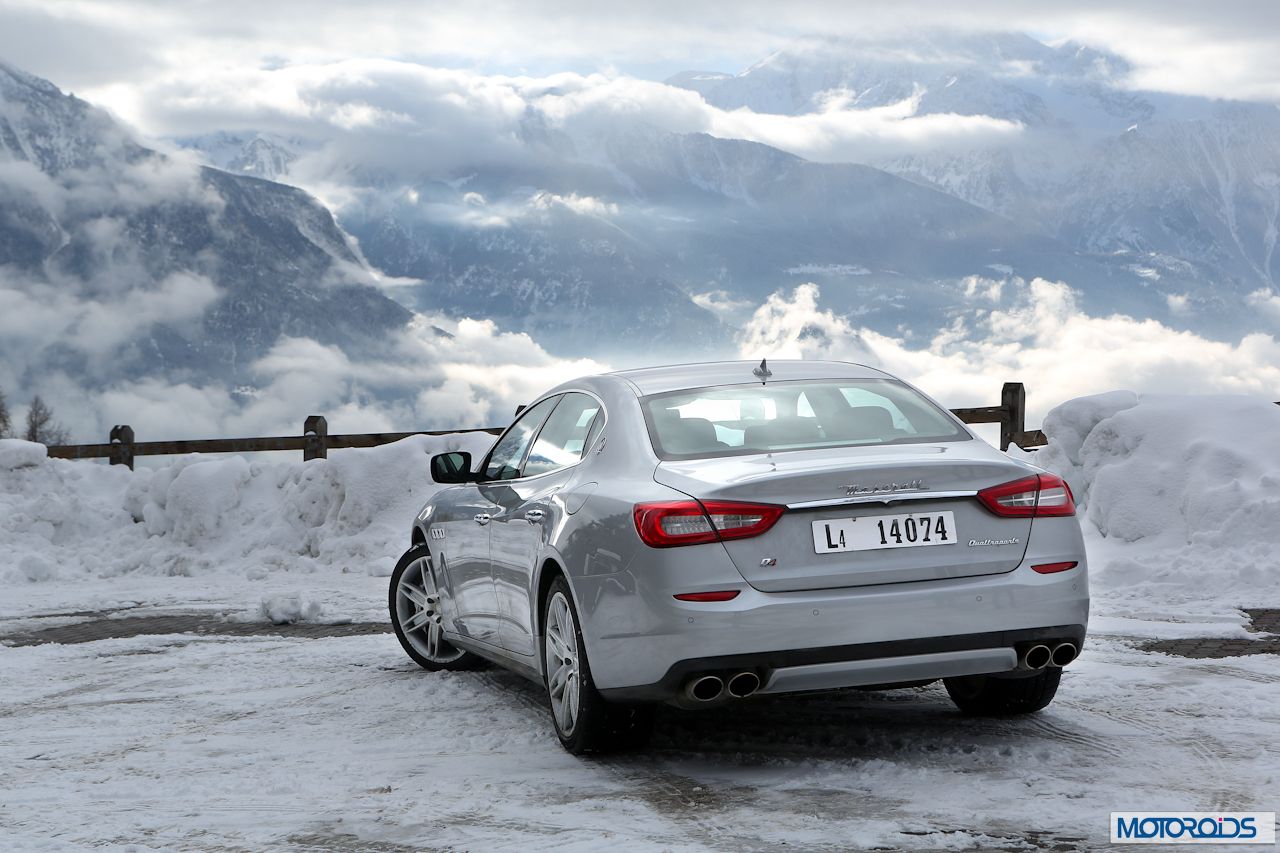 Thanks to some training we had from two excellent instructors – Fiorio and Rossetti – for a while we forgot we were driving a luxury sedan and we felt as if we were inside a WRC simulator. On the video we posted you can enjoy the Quattroporte & Ghibli S Q4 dancing marvelously on snow. This was the best Walzer we could ever have had in a place like Cervinia 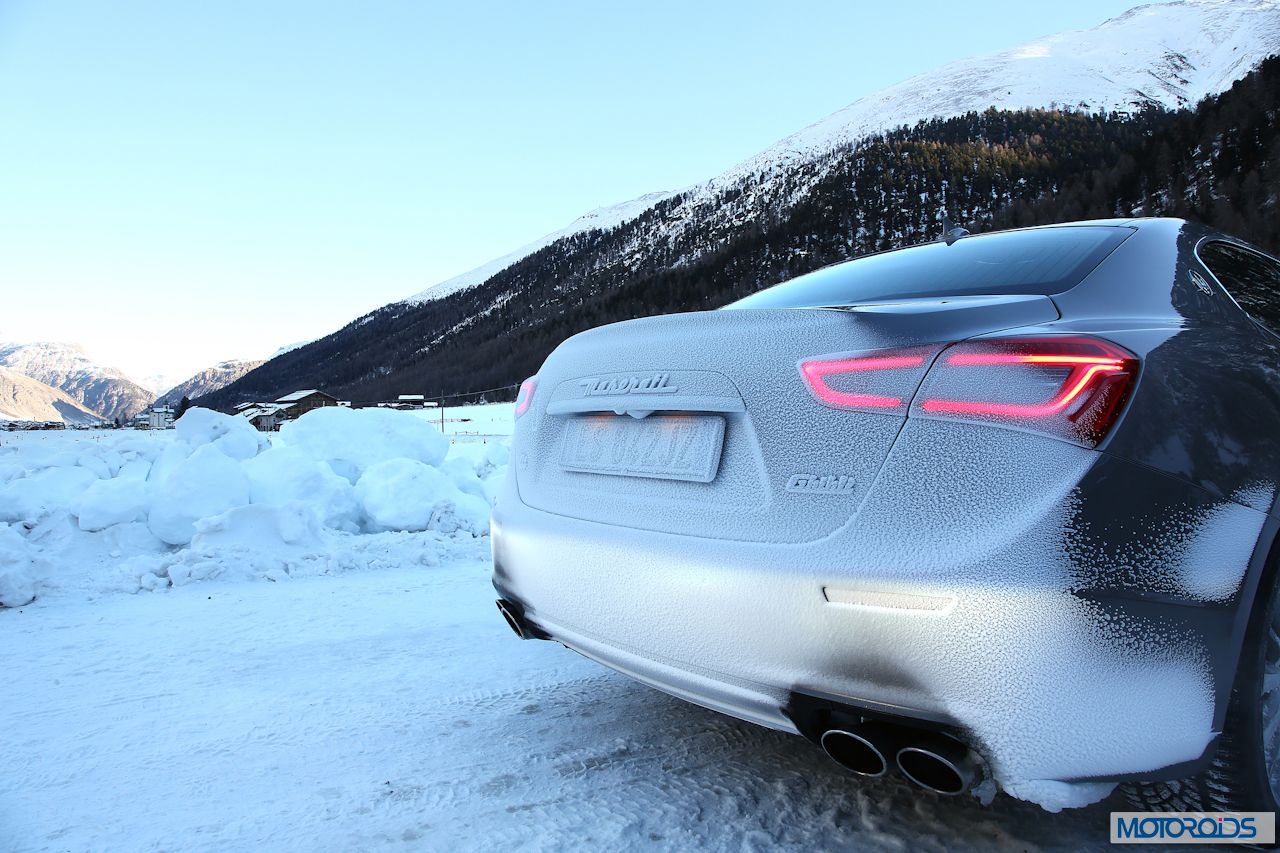