The year 2012 marked the entry of KTM in the Indian market. Since its launch, it has taken the market by storm and over the years, have become the most successful offering by KTM. It didn’t change much since the time it was launched and a major upgrade was long overdue. KTM has now thoroughly upgraded the Duke 200 and has launched the 2020 BS6 version at Rs 1,72,750.

The visual differences are quite prominent as it now follows the same design philosophy seen in other bigger KTM nakeds like the SuperDuke 1290. It now looks more in line with the rest of its cousins. The front end is now sharper than before and includes a new headlamp unit with LED DRLs. It still makes do with halogen lamp though. Other cosmetic upgrades include new tank decals and extended tank shrouds while the rear end looks inspired too, from the bigger KTMs. 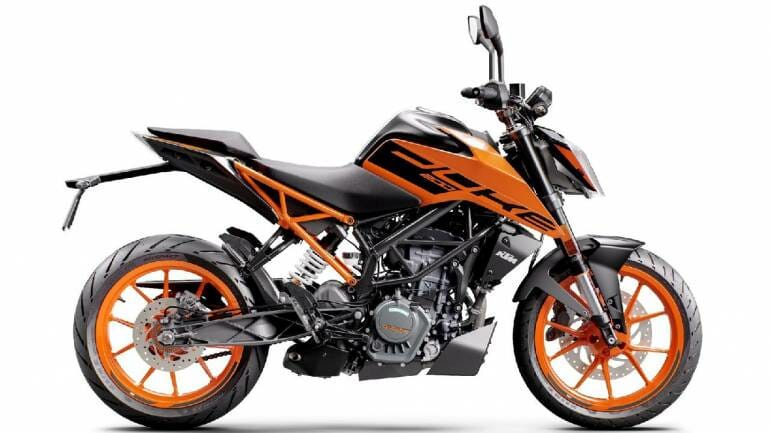 The frame is now split-unit and now comes with a rear sub-frame which makes it handle a bit better than before. The wheelbase is same but length, height and width has increased and so has the seat height. Where the previous seat height stood at 818 mm, it now stands at 823 mm. The ground clearance however, has come down to 155 mm from the previous 175 mm. Just like the rest of the motorcycles which are now BS6 compliant, the weight has increased in the case of the new Duke 200 too. It now tips the scale at 159 kg making it 11 kgs heavier than before.

The fuel tank capacity has gone up to 13.5 litres because it houses the same tank unit as the Duke 390. The instrument cluster is the same as before and loses out on the colored TFT screen which the Duke 390 boasts of. The ABS on this motorcycle is now dual channel and is manufactured by Bosch. The suspension travel at the front has increased by 2 mm. Among the other changes, the exhaust routing is different too and the exhaust body has been changed too. It now sounds more appealing and throatier than before.

It now handles better, looks even more spectacular than before and packs the same engine without losing any power or torque. It is now heavier than before, yes, but those looks could kill!