The Hyundai Verna serves as a guide-book if a manufacturer wants to come up with a feature-packed sedan. Ever since it was introduced in the Indian market, it has remained a benchmark in its segment. Its prime rival comes in the form of Honda City which was recently updated. The Hyundai Verna too, received a facelift and the brawl between these two sedans is now more ferocious than ever. The Korean manufacturer has made the Verna even sharper than before and has bestowed it with some other upgrades as well.

The Honda City is longer, wider and rides higher as well. On the other hand, the Hyundai Verna has always been renowned for its sharp styling and has found many takers based on its looks alone. 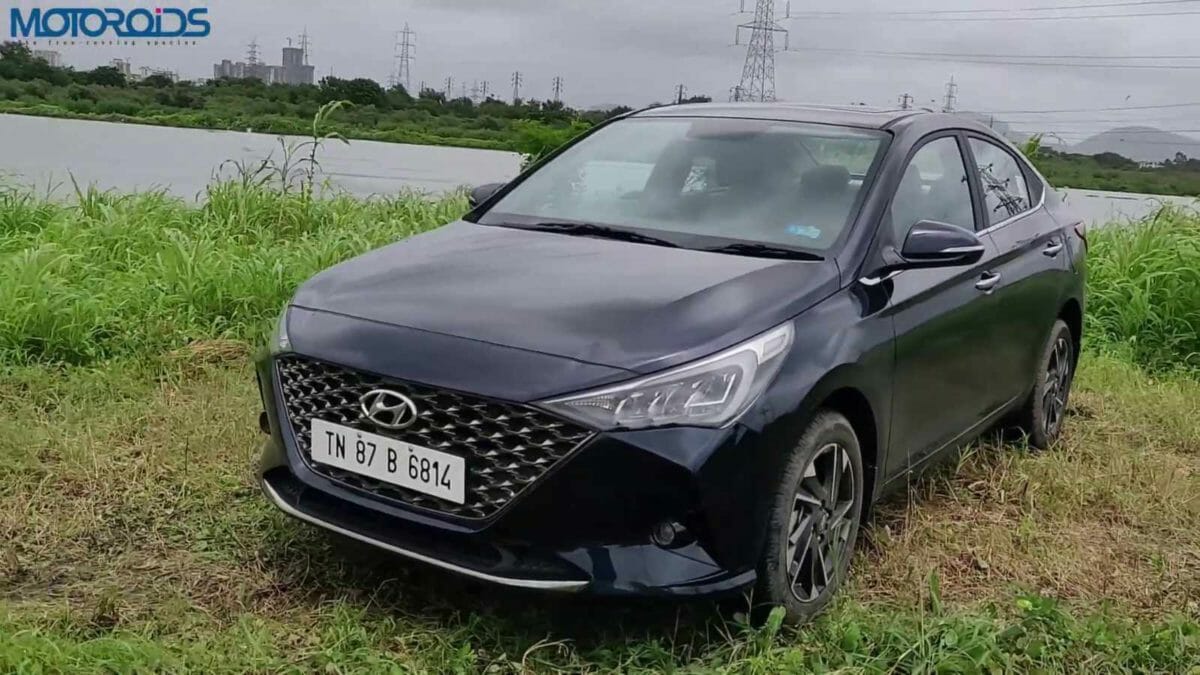 The Hyundai Verna in its latest guise has been crafted meticulously and has upped the game even higher when it comes to the looks of a car. The front encompasses a dark-chromed 3-D grille which according to us, is the best of the lot. It looks like a separate team of designers sat down and decided to blow the competition out of the park when it comes to neatly designed grilles. There are sharp creases all around and the fog lamp housing too, looks like a piece of art. The cascading grille up front is flanked by new sharp-looking LED headlamps. 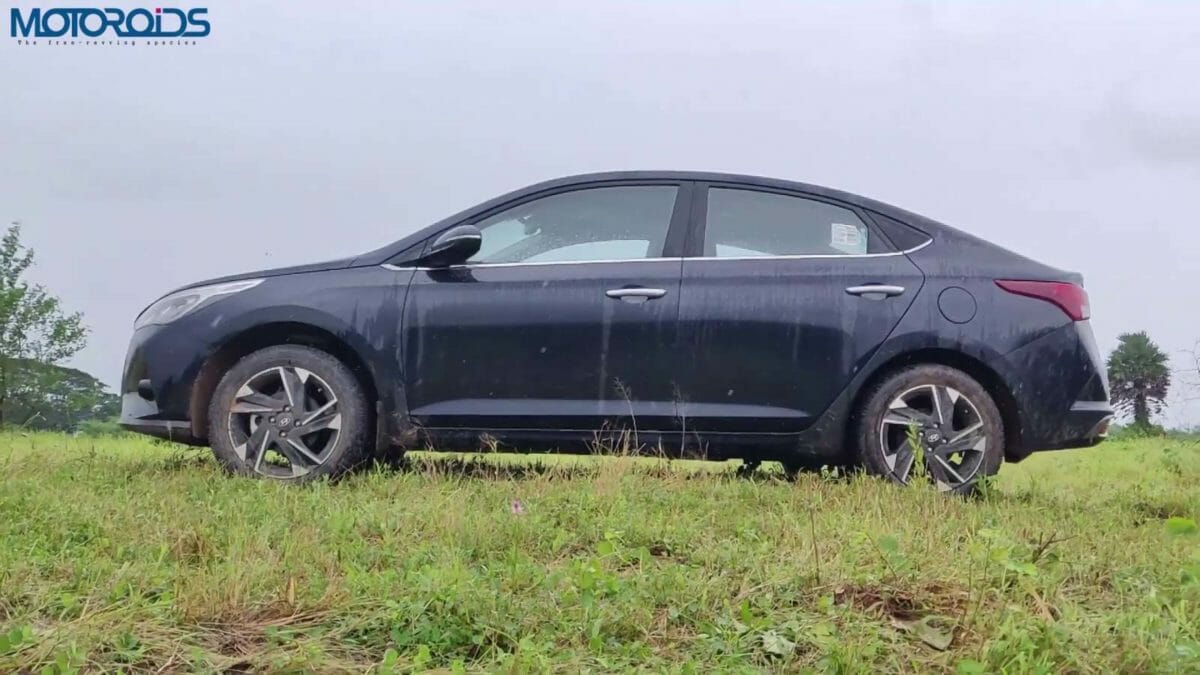 The bonnet too, looks muscular. The most striking design element of the side profile has to be the 16” diamond-cut alloy wheels. While the 1.5-litre N/A petrol that we drove had drum brakes at the rear, the turbo-petrol variant gets discs on all four wheels. Ground clearance stands at 165mm and the roofline looks like it is borrowed straight from a coupe. At the rear, the tail lamps feature some changes and the turbo variant can be uniquely distinguished by its characteristic twin-tip muffler and glossy black grille.

There’s no denying to the fact that cabins of Hyundai’s cars deserve the top spot in their segment and the Verna is no different. Everything inside the cabin is neatly laid out and falls ergonomically correct. The visibility through the windshield is good, all thanks to the flat dashboard. The fit and finish around the cabin is nothing to complain about. The steering wheel can be adjusted both ways. The Verna facelift is the only sedan in its class to feature a fully-digital instrument console. In addition, it also gets a 4.2-inch driver information display (MID) that displays a multitude of data to the driver. The same unit is also shared with the next-gen i20, although the unit on the new Creta is slightly different. We do think that the speedo should have been given the middle space. 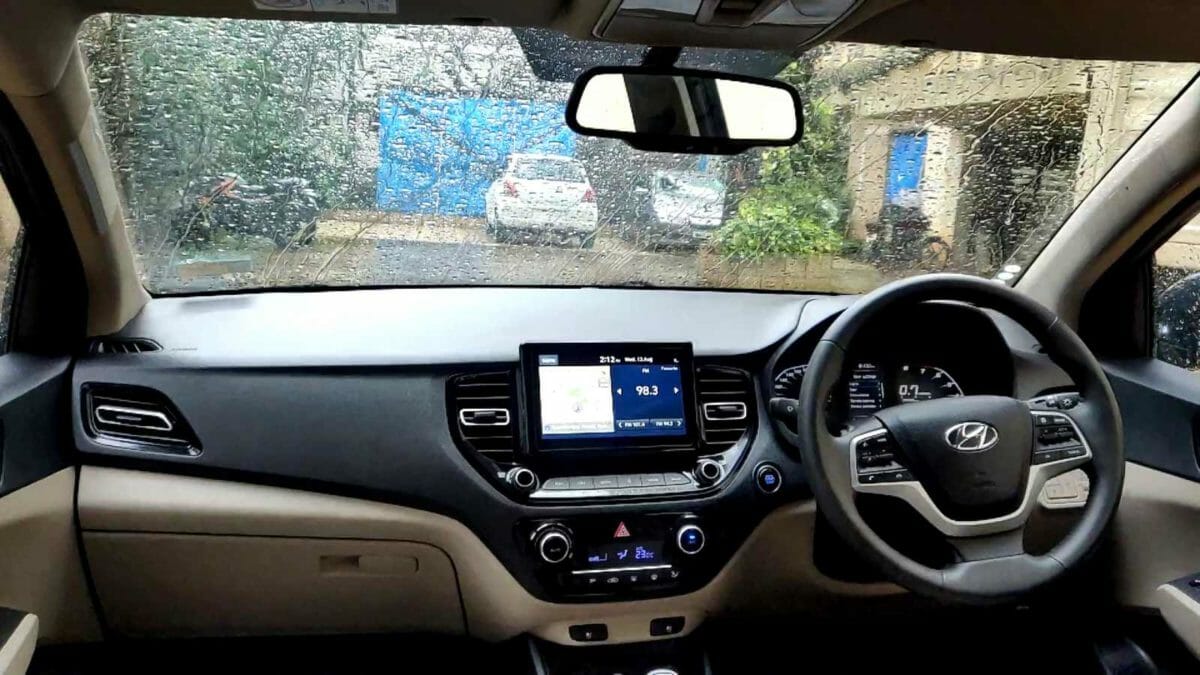 The biggest addition has been the BlueLink Telematics System. It comes with 45 features, including remote engine and air-con operation (automatic only), voice commands for in-car functions and more. It also lets the owner access in-car functions with the help of their smartwatches. Hyundai has made it clear that all the further launches will feature the BlueLink Telematics. 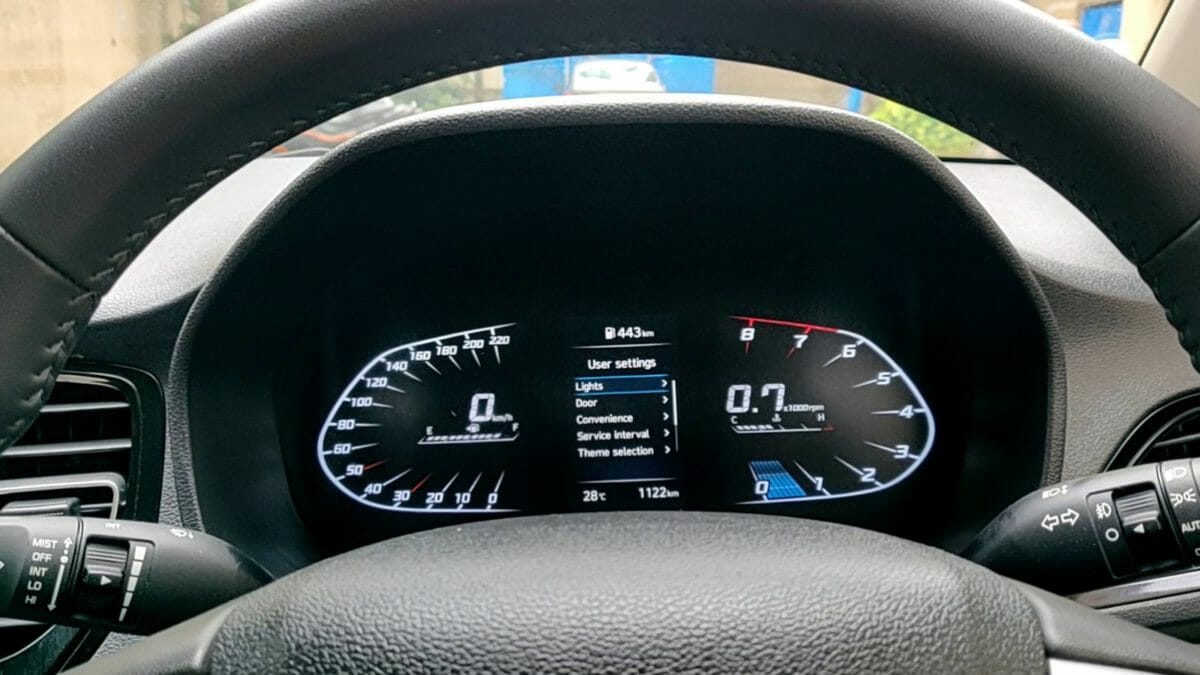 Other features include auto-dimming electro-chromatic mirrors, automatic headlamps, cruise control, automatic AC, wireless phone charging, ventilated seats, single touch electric sunroof and many more. If you opt for the turbo variant, you will also get a set of paddle shifters! The seats offer nice support and the one thing which manages to stand out is the insulation of the cabin. It seems like Hyundai is really focusing on making the cabin a rather quiet place. 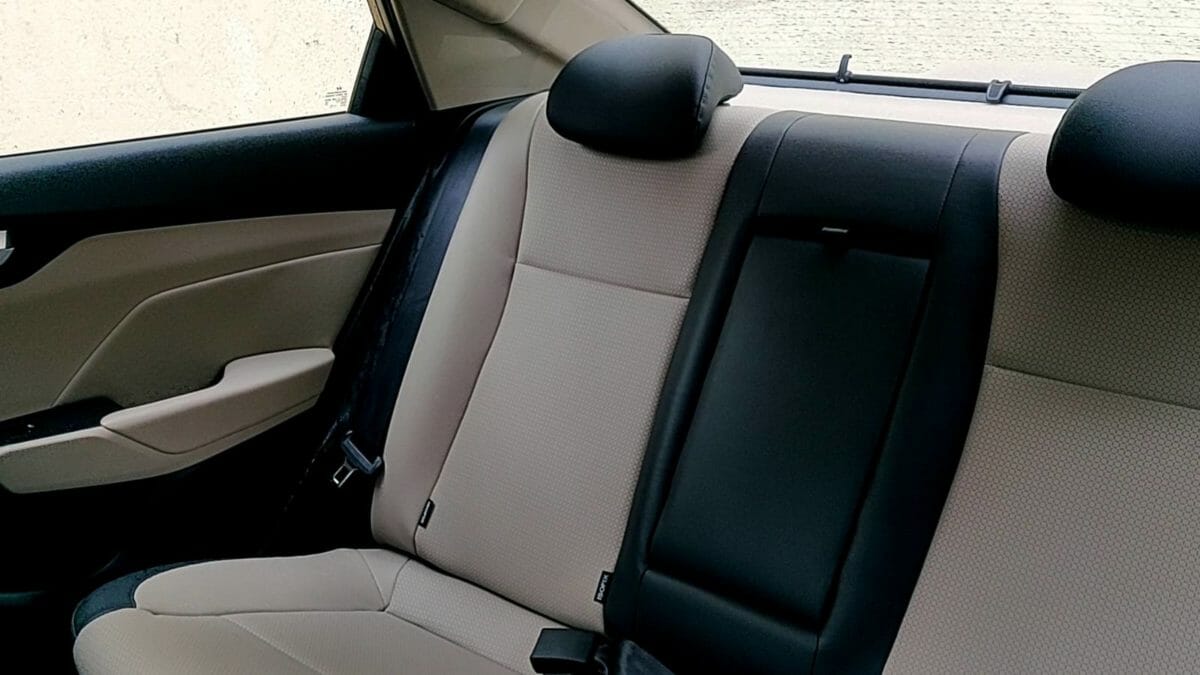 Passengers at the rear might not feel as roomy as they might in the Honda City and Maruti Ciaz because the knee room is definitely better in those two cars. It doesn’t really pose a problem because the seats provide good thigh support. The headroom could have been a little better though. The windows too, are slightly narrow but the overall comfort level is still commendable. 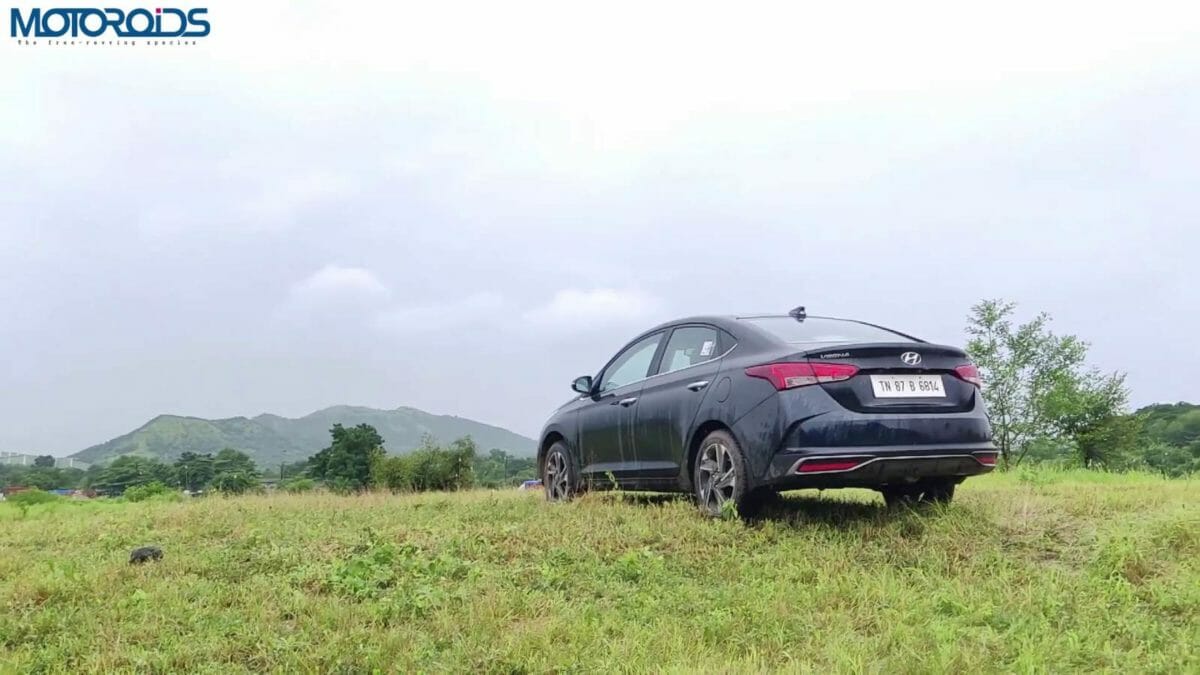 The engine is very smooth, as you would expect from Hyundai. The engine might not be performance-oriented but it is very tractable and stays alive even at lower revs. So much so that we found ourselves sitting at 20 km/h with the transmission slotted in 4th gear! And still, there was no stutter from the engine whatsoever. The engine pulls cleanly once you cross the 1500 rpm mark and revs strongly until it hits its redline. The engine is paired to a 6-speed gearbox which is also the smoothest in its segment. It doesn’t make you miss the comfort of an automatic transmission which alone says a lot about the transmission. The fuel economy is rated at 17.7 kmpl which is pretty decent for its class. 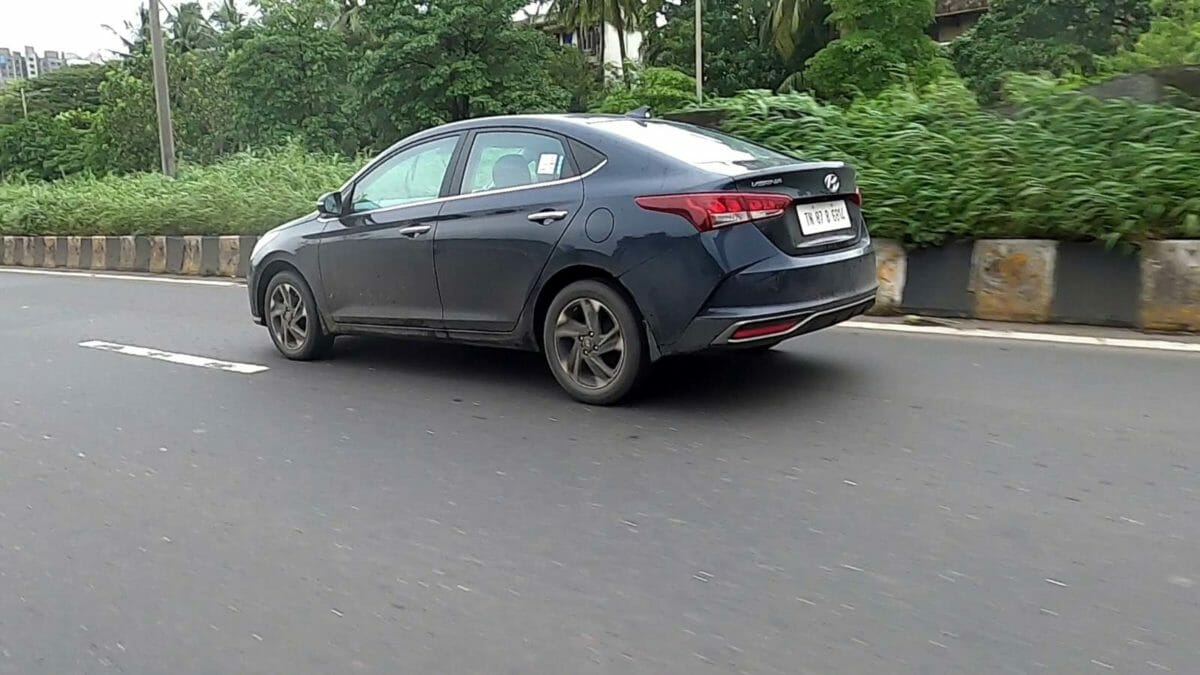 The steering wheel is light and proves to be a boon while dealing with the urban elements but if you are an enthusiast looking for some driving fun, you would find yourself desperately wanting some feedback from the wheel. The suspension setup is the most comfortable in the lot and we know that it’s a very cliché thing to say in a review, but it actually glides over potholes. The Verna redefines the above-mentioned phrase because the ride quality is so phenomenal! While the suspension setup works in favour of those looking for a comfortable car but then again, if you are an enthusiast and want to push the Verna a little bit further, you would find the experience to be a little floating.

The Hyundai Verna might look sporty but its excellence lies in the levels of comfort it boasts of. It might not be as spacious as some of its counterparts or its driving dynamics might not please the enthusiasts out there but when it comes to the features on offer and the exceptional ride quality, there is no match for the Hyundai Verna.