KTM surprised us by launching the Duke 125 in the Indian market some time back. While the Austrian bike maker has been building the bike here in Maharastra, it was only made for exports. In a market where most 125 cc products are made for a basic commute, an overpriced pocket rocket would not seem to make sense. Then comes in the financial aspect. 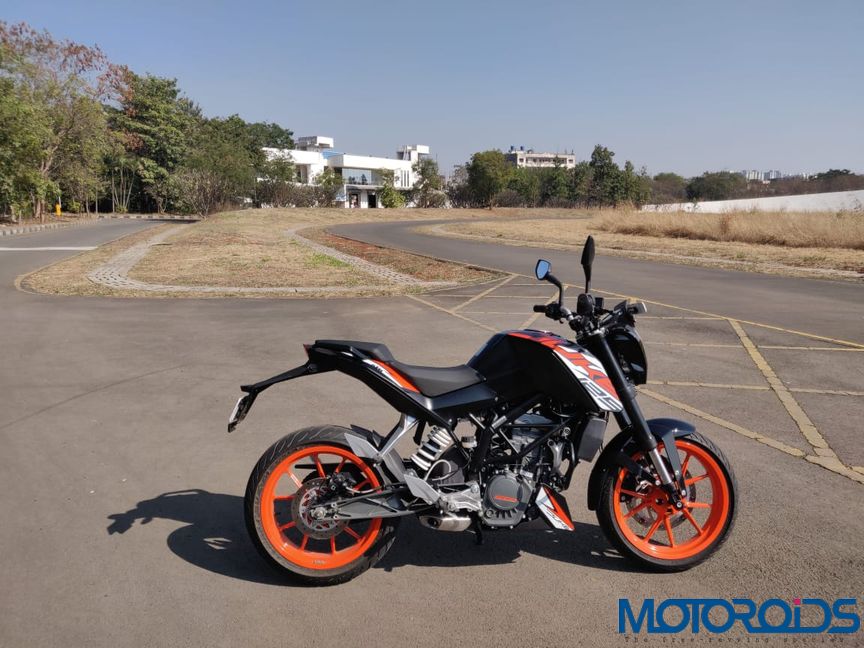 Being a fuel injected and much more potent engine, there is no way that the Duke 125 would come close to the other 125 cc bikes in the Indian market in terms of price. Maybe that is why KTM took their sweet own time before launching this product in the Indian market. Well, since it is here now, we took it out for a spin and here is what we think about the KTM Duke 125. 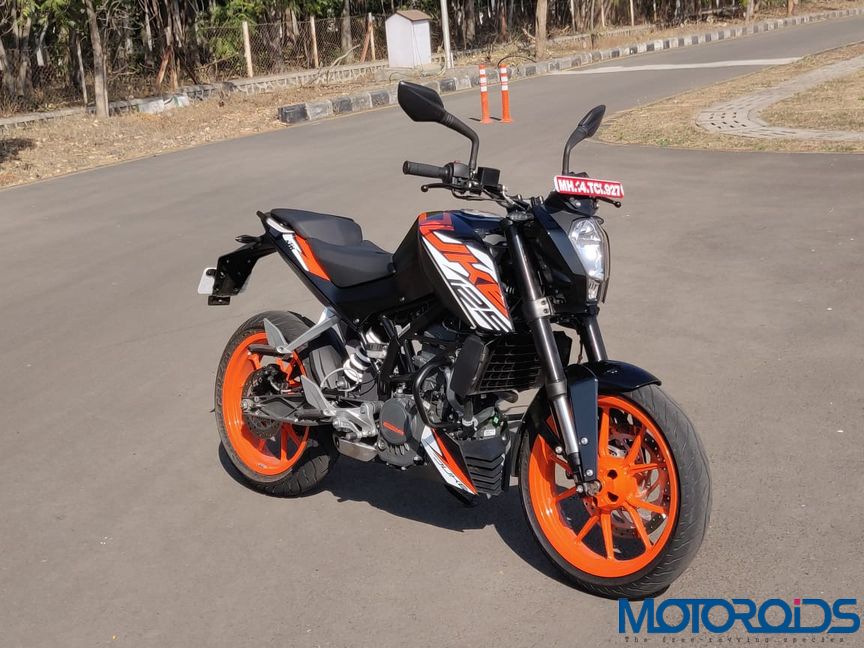 If one looks from a distance, there is no difference as such between the Duke 125 and the Duke 200. Both the bikes share the same frame, alloys and even the engine block. Upon taking a closer look, you will realise the minor changes in graphics which distinguish the smaller 125 cc bike from its elder sibling. Even the dimensions and the kerb weight of 148 kilograms are the same in both these bikes. Just like the Duke 200, the Duke 125 also gets a digital instrument console, which provides the rider with sufficient information as and when required. 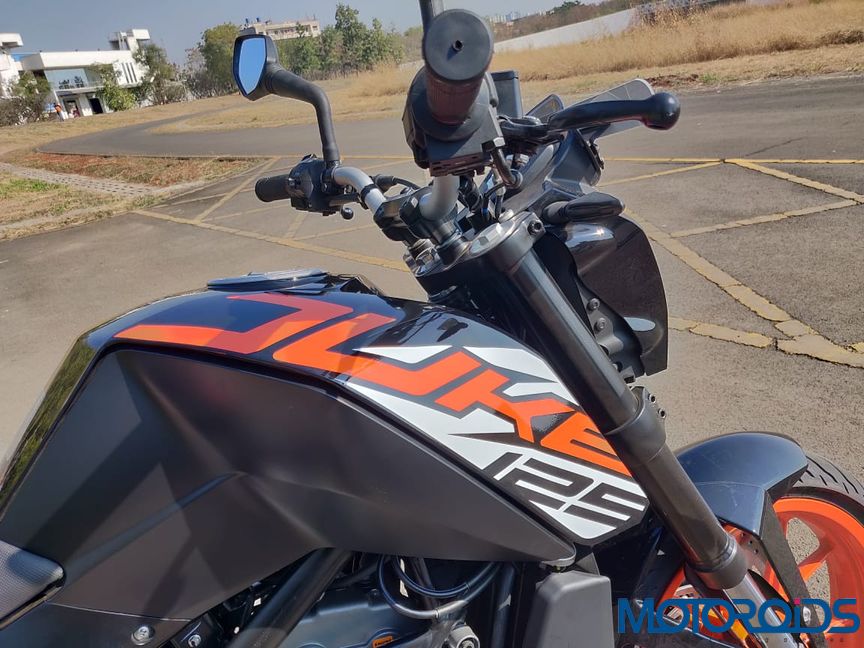 Powering the bike is a 125 cc engine which is good for a maximum power output of 14.5 PS @ 9,250 rpm and maximum torque is 12 Nm @ 8,000 rpm. The motor redlines at 9,500 rpm, post which, the limiter cuts its further progress at 10,000 rpm. These figures are unheard of from a bike in this segment, which is why the Duke 125 cannot be compared with other 125 cc bikes in the market. The engine feels smooth and vibration free even at the limit, with very negligible vibes filtering through. The torque available at the lower revs is surprisingly good for a KTM, which will aid, within town rideability. Beyond 4,000 rpm, the engine responds promptly to inputs at the accelerator, and comes into its own and begins to deliver its punches, 6,500 rpm onwards. 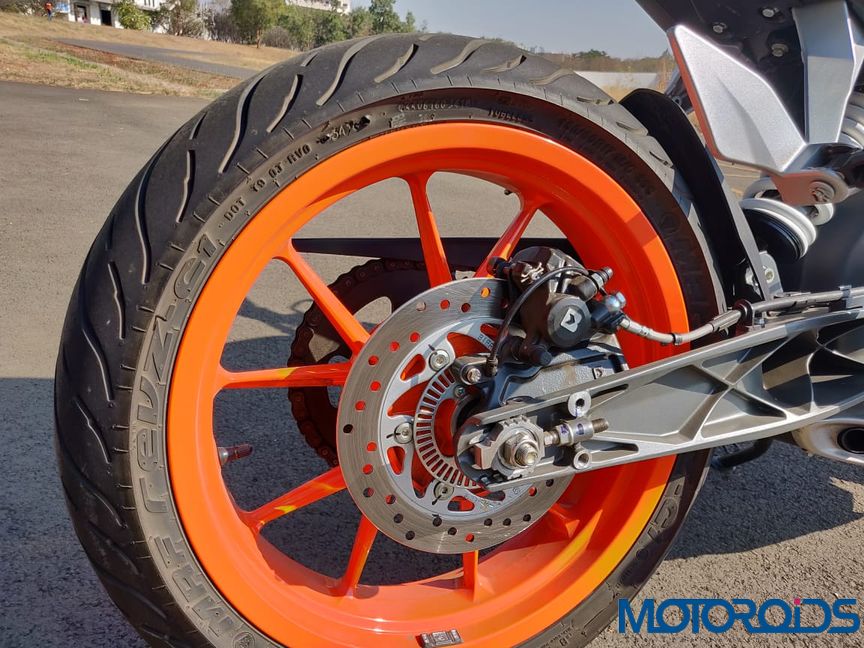 The engine sends power to the rear wheels via a 6-speed transmission where the 6th gear is more of overdrive to extract more fuel efficiency from the engine. The Duke 125 has a speedo indicated top speed of 110 kmph, which is achieved in the 5th gear. In gear maximum speed which we managed to record was as follows: 1st: 40 kph, 2nd: 55 kph, 3rd: 75 kph, 4th: 92 kph, 5th: 110 kph (Speedometer indicated). 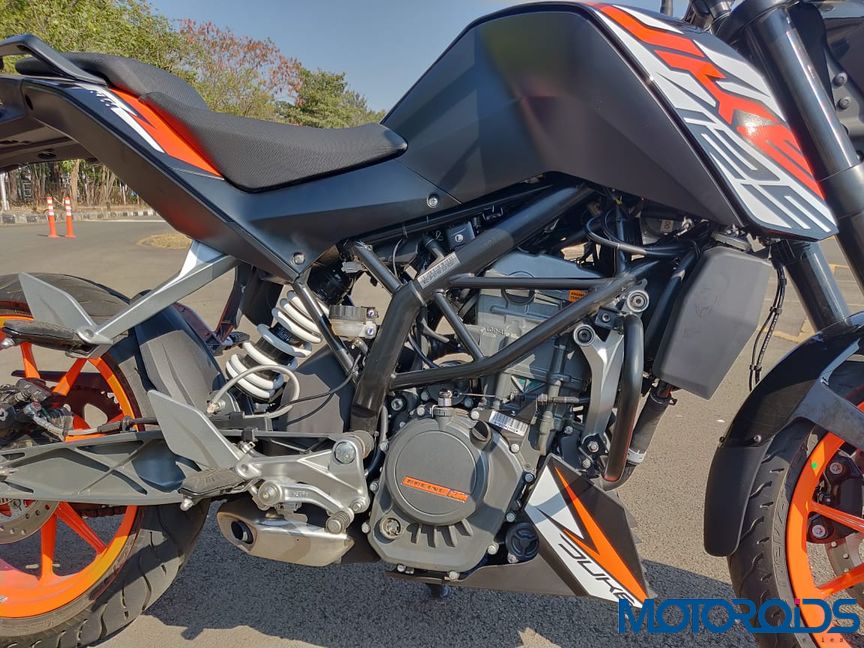 Anchorage duties are taken care by a 300 mm disc up front and a 230 mm disc at the rear. While both the discs have an ABS ring, the bike is equipped only with a single channel ABS system. However, the KTM Duke 125 gets a rear lift protection system. Unfortunately, the ABS system is not switchable and is always on. Suspension duties are handled by USD forks up front and a monoshock at the rear. Being a KTM, the suspension is a bit on the stiffer side, yet, it is quite absorbent going by KTM standards.

Just like the Duke 200, the Duke 125 also gets MRF Revz tyres which are of 150 section in the rear and 110 section in the front. The wider track also helps the bike with its handling and braking capabilities, which is by far the best for any 125 cc motorcycle we’ve ridden till date. However, that large adhesive patch and the 148-kilo heft does take its toll on acceleration and top speed.

Also Read: New 500 cc Twin-Cylinder KTM In The Works; Will Be Manufactured By Bajaj In India

So should you be buying this bike? Well at INR 1.18 Lakh, ex-showroom, the bike is INR 42,000 cheaper than the Duke 200. The Duke 125 becomes a value for money proposition since you are basically getting the same chassis, suspension, wheels and engine block at a much cheaper price. If you are someone who does not require the extra power the Duke 200 offers, the Duke 125 is a bike you should seriously consider. Moreover, remove those decals and it does become a 200 Duke for someone who is only after the image or those looks. The KTM Duke 125 is available in shades of Black, Orange and White.