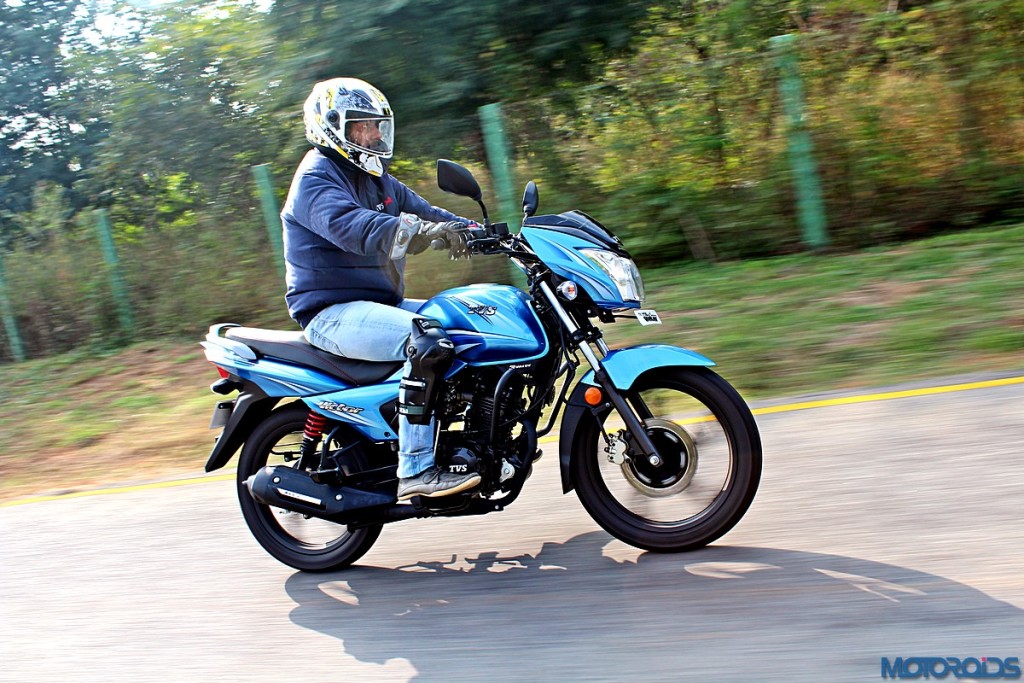 Ah! The old square jawed Victor. All I remember that it would make fussy starts on cold mornings. Anyways, it enjoyed its days in the sun until competition measured up and clipped its wings. There’s a new one out right now after the earlier ones were all sent to the grave way back in 2007. This one, TVS says, is an executive commuter that is primarily targeted at the working, married man and his family. After the relatively successful Star City+, the Victor is TVS’s next big money spinner. In a fiercely competitive segment, TVS expects brand Victor to swirl its magic wand once again to gain some respectable market share. 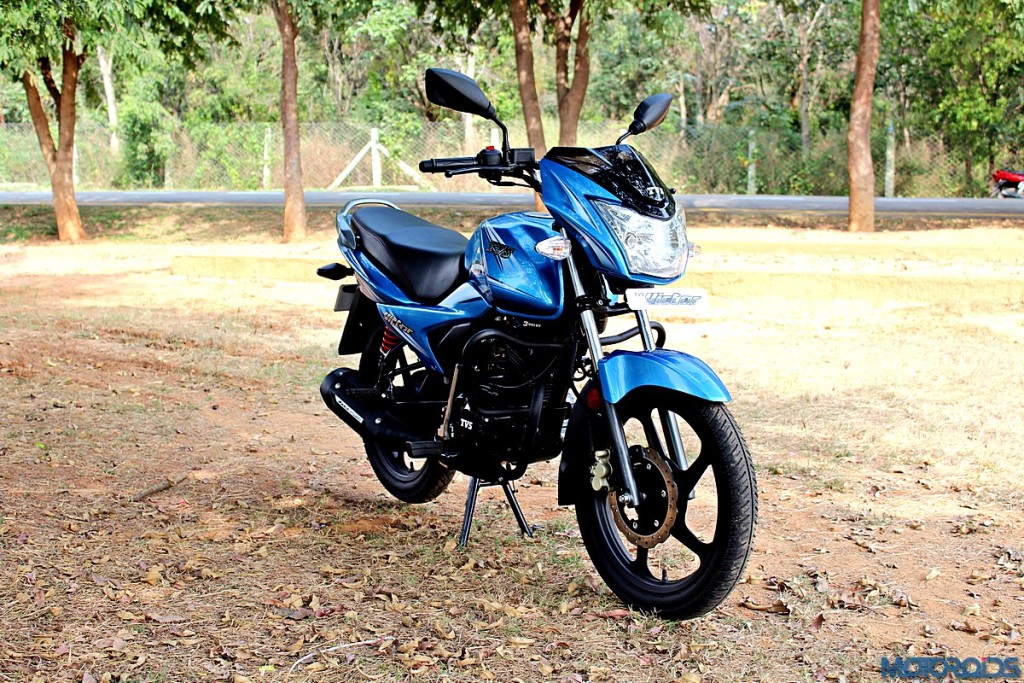 We take the new TVS Victor for a spin on the manufacturer’s test track at Hosur to find out exactly that. TVS ascertains that the new Victor is a completely new motorcycle. That said, it shares quite a few visual cues with the Star City+. However, things have been spruced up considerably for this one. 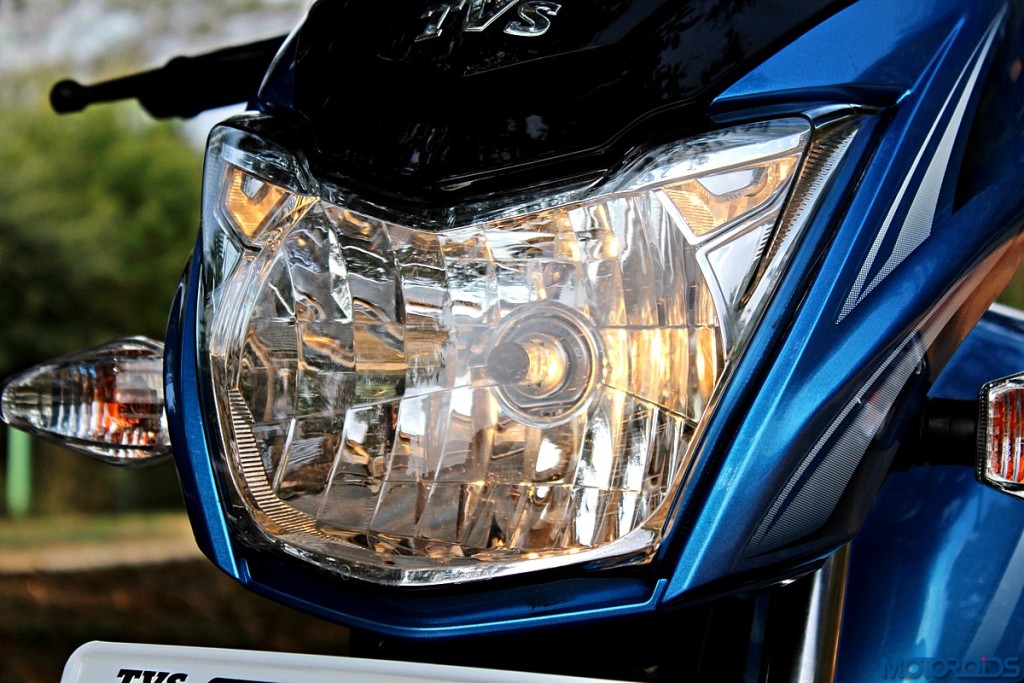 The front end is dominated by this massive headlamp that is claimed to be the most powerful in its class. Which is a commendable addition because commuter machines don’t really light up the road ahead; they merely highlight it. 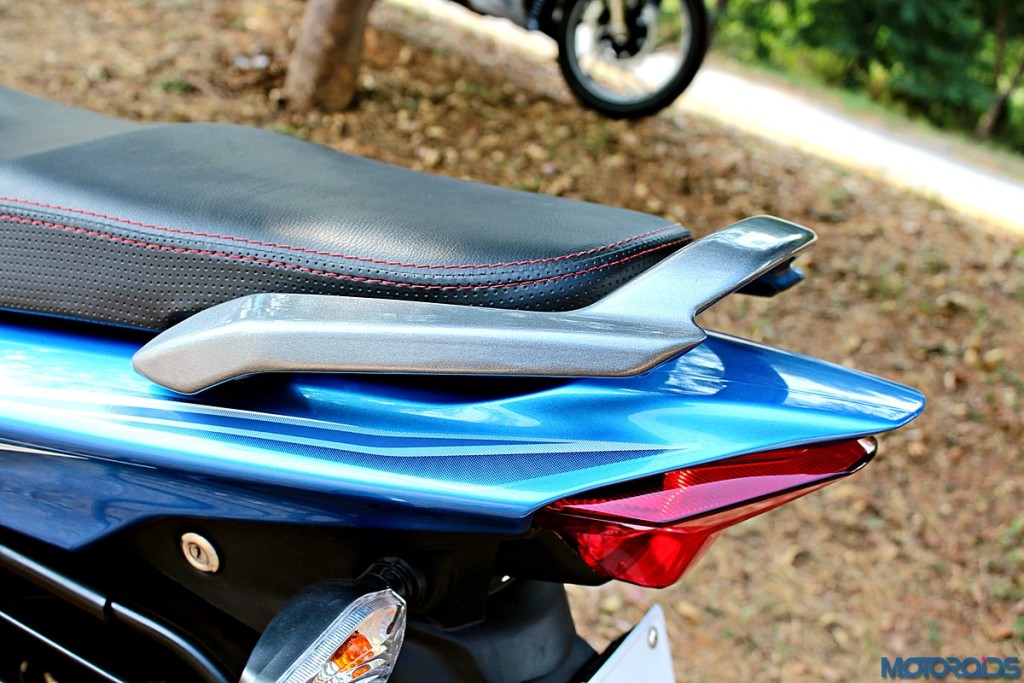 The tank is quite curvaceous and features a classy aircraft style fuel filler cap, while the stepped seat is ridiculously comfy, just like the Star City+’s throne. What’s more, BMW called. They wanted their red contrast stitching back. 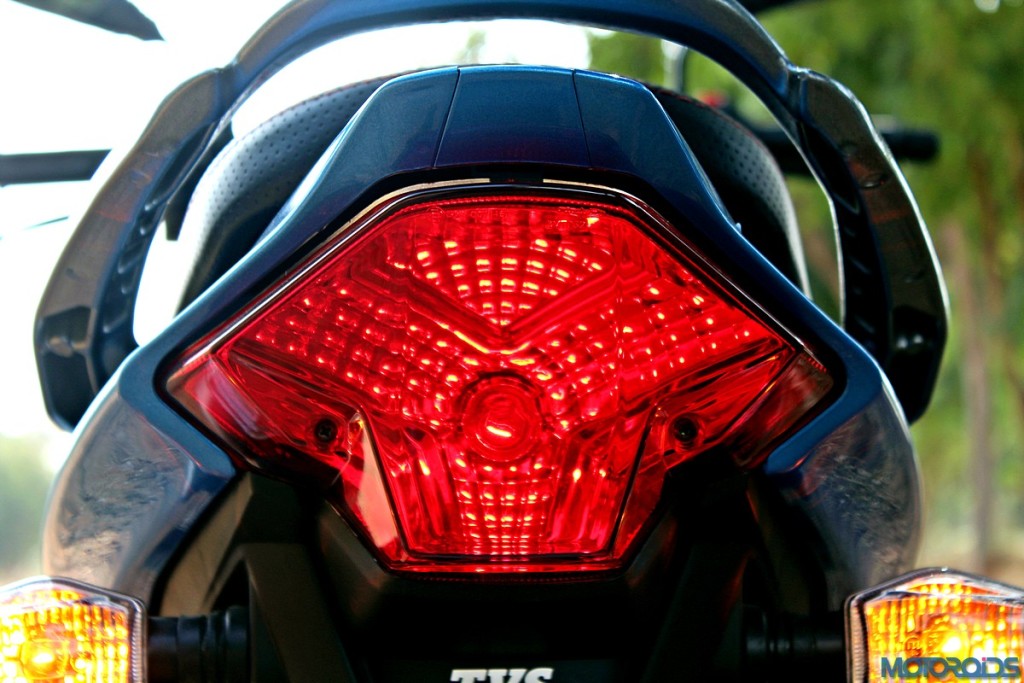 The rest of the design is preened with contemporary nips and tucks. The passing resemblance to the Star City+ cannot, however, be ignored. The tail lamp is oddly shaped, large and trihedral, while the integrated grab rails look cool. 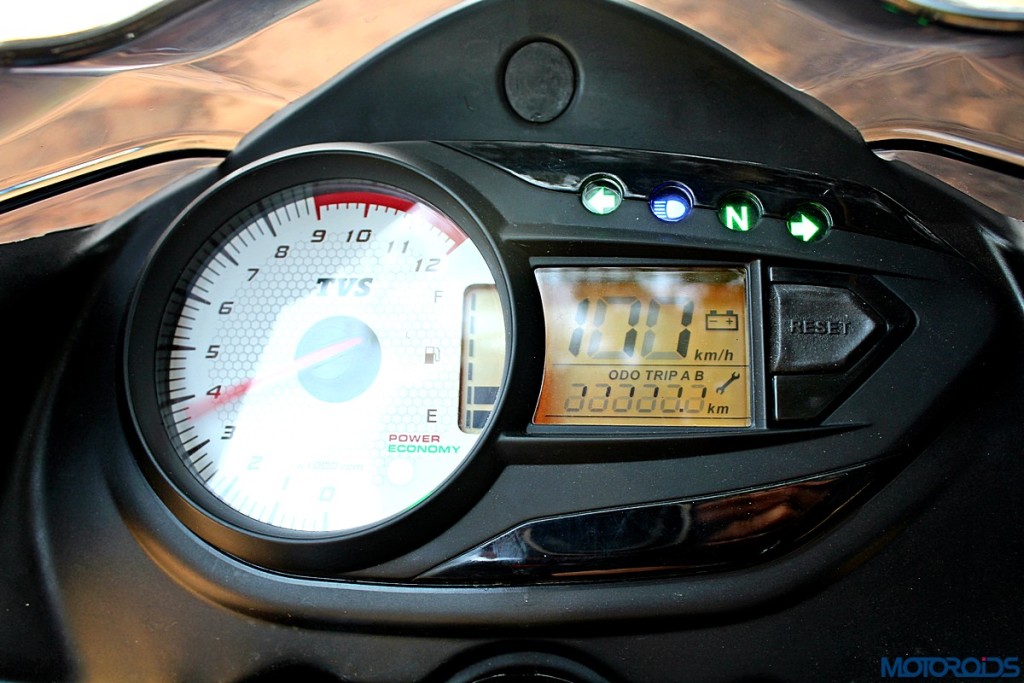 The new Victor’s instrument console is all-new as well and is dominated by a large, white-faced tachometer swept by a racy red needle. Like all TVS commuters, the Victor also features Power and Economy modes. The speedometer shares digital space with the odometer, service and battery life indicators. All the information is clear and legible, while classy piano black highlights ups the instrument cluster’s premium ante. 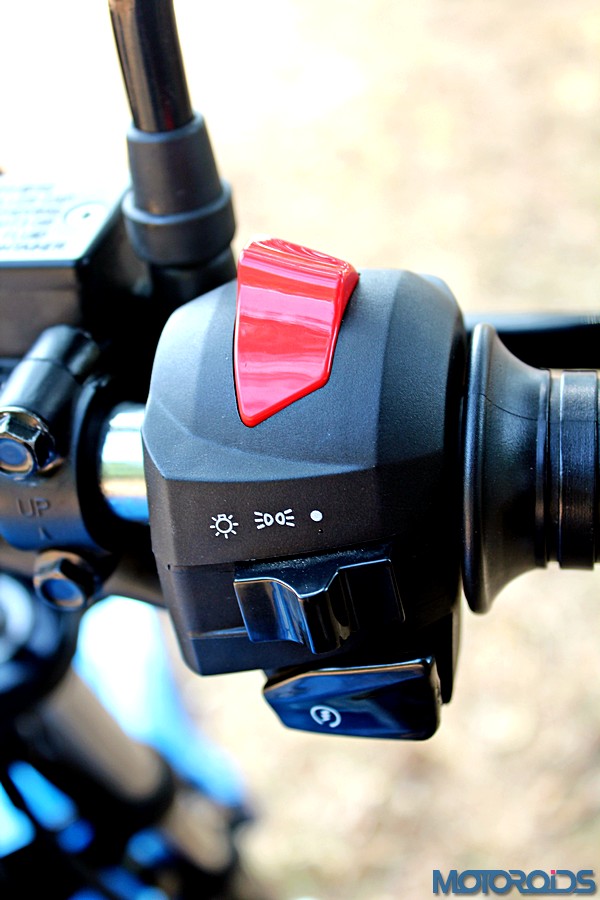 The Victor comes with hazard lights as standard. To activate them, one must thumb a piece of red plastic that not only looks remarkably similar to an engine kill switch, it is also positioned at a place where you’d expect nothing but that. It did lead to some confusion initially, but once gotten used to, one doesn’t mind its presence. 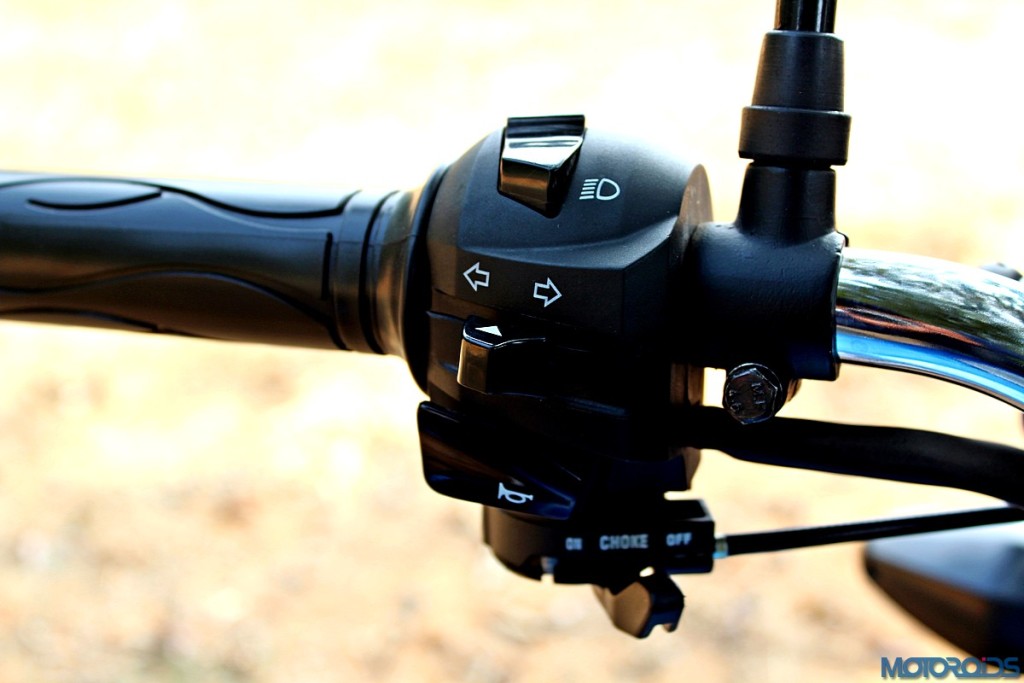 Switchgear quality and overall fit and finish are easily the best in its class and even comparable to bikes a few segments higher to it. TVS clearly knows how to design and make quality switchgear; Honda, take a cue. 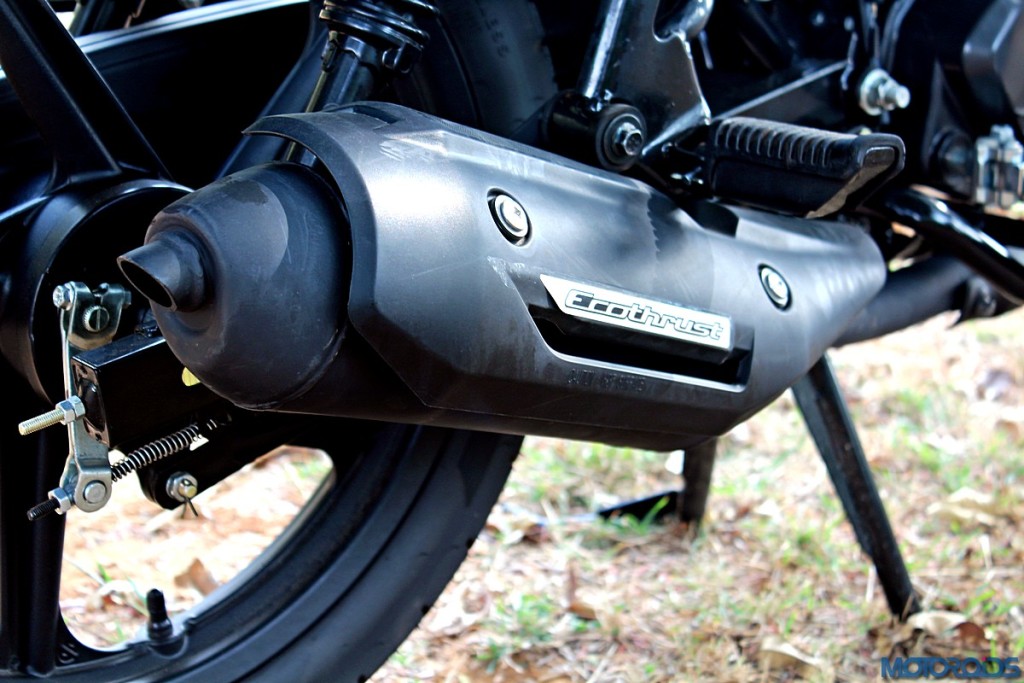 The stubby exhaust is nice, blacked out and round, and emanates a throaty note that’s unmatched by the competition. The riding position is upright, comfortable and pure commuting pleasure. 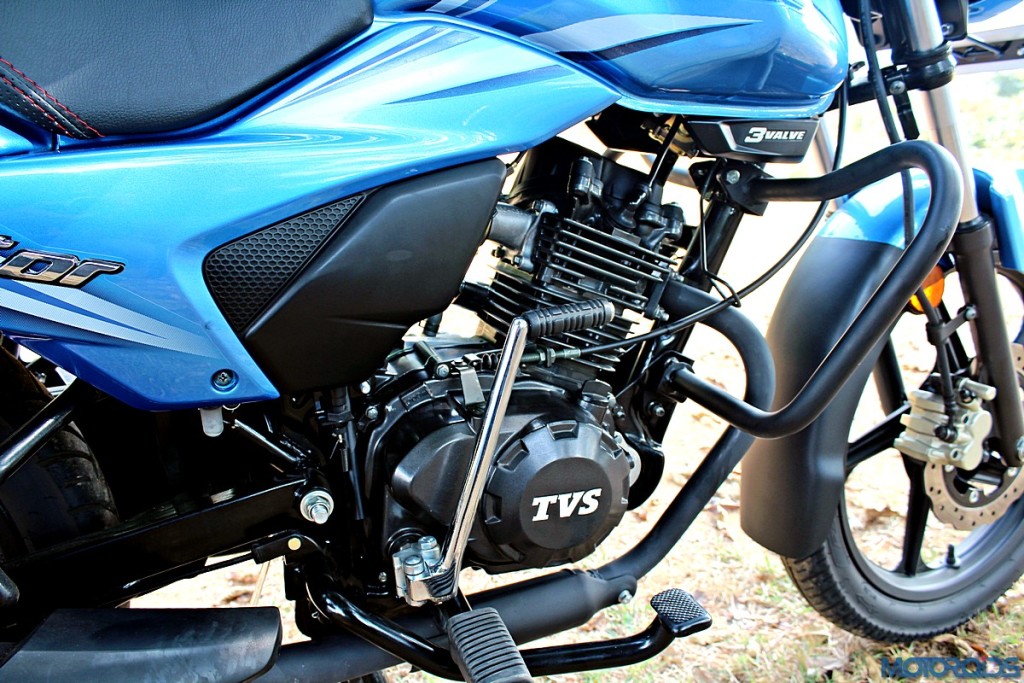 The all-new single-cylinder, air-cooled, 110cc engine from the company’s Ecothrust series makes 9.46 bhp at 7,500rpm and 9.4Nm of peak torque at 6,000rpm. That’s enough for a claimed 0-60 kph sprint in 7.2 seconds; quite swift for a commuter. Like the new Apache 200, there’s an oil-cooled combustion chamber that, TVS claims, results in better performance and NVH levels. Then there are 3 valves, a bigger CV carburettor, a higher capacity air filter and spring loaded rocker arms that help reduce tappet noise, along with a host of new innovations. What’s more, the new TVS Victor will deliver a real-world fuel efficiency of 76kmpl, according to TVS.

It’s impossible to judge a commuter motorcycle’s real-world abilities by riding it around a test track, most of which happens to be straight stretches. But still, I’d say that the Victor felt noticeably quicker than the Star City+ through the gears. Although there were a bunch of vibes creeping in at higher engine speeds, TVS put it as a “brand new bike” issue. However, she felt quite refined at sane speeds that the married man will be commuting at. All those workings applied to the engine seemed to deliver just fine, and the Victor will happily cruise at speeds of 70-75kmph all day long without stressing the engine. Straight line stability is great, and there’s a likeable sprint in its gait that denotes that the new Victor offers extra servings of everything for its segment. 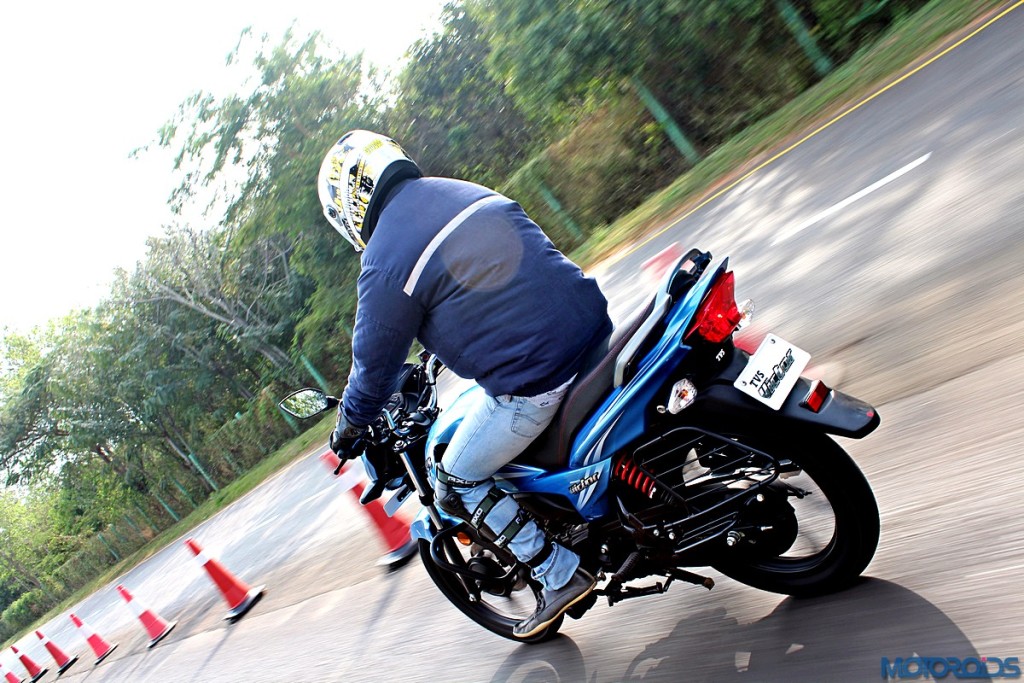 When the curves came through, the Victor proved to be quite the baller. It’s waif-like thinness and lack of weight made it spur through the corners delightfully. The new tires, said to be made out of some Remora compound proved to be quite sticky as the Victor comfortably held its line under heavy lean through the fast, sweeping right-hander. Of course, the track’s knobby surface and Victor’s soft suspension made things quivery and jittery at times, but nothing to put oneself in a spot of bother. I must say that the chassis, like the Star’s, is inherently well balanced.

Ride quality is as comfortable as a 40-something male and his family would want it to be. The Spring in Spring suspension at the back does a good job of soaking up the undulations on the tarmac. The softness can also be adjusted, lest your wife complains. 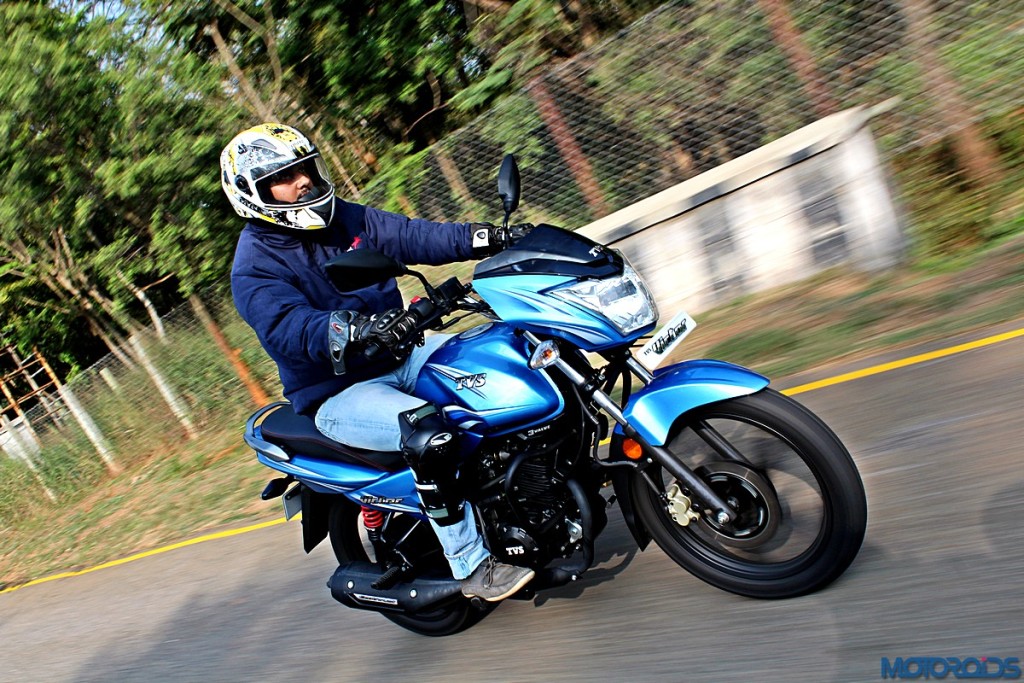 The brakes are clearly a marked improvement over the Star City+, as there’s a potent petal disc brake up front which just robs off speed in the blink of an eye. Given that Victor is a light motorcycle and isn’t particularly quick, the Victor stops on a dime.

The TVS Victor is a well-rounded product. It’s smooth, refined, yet peppy. The dynamics, brakes and stability are well sorted. The styling is inoffensive; pretty much how it should be for a commuter motorcycle. However, we need to stack it up against its rivals or wait until a proper road test review to judge how she performs in the real world. 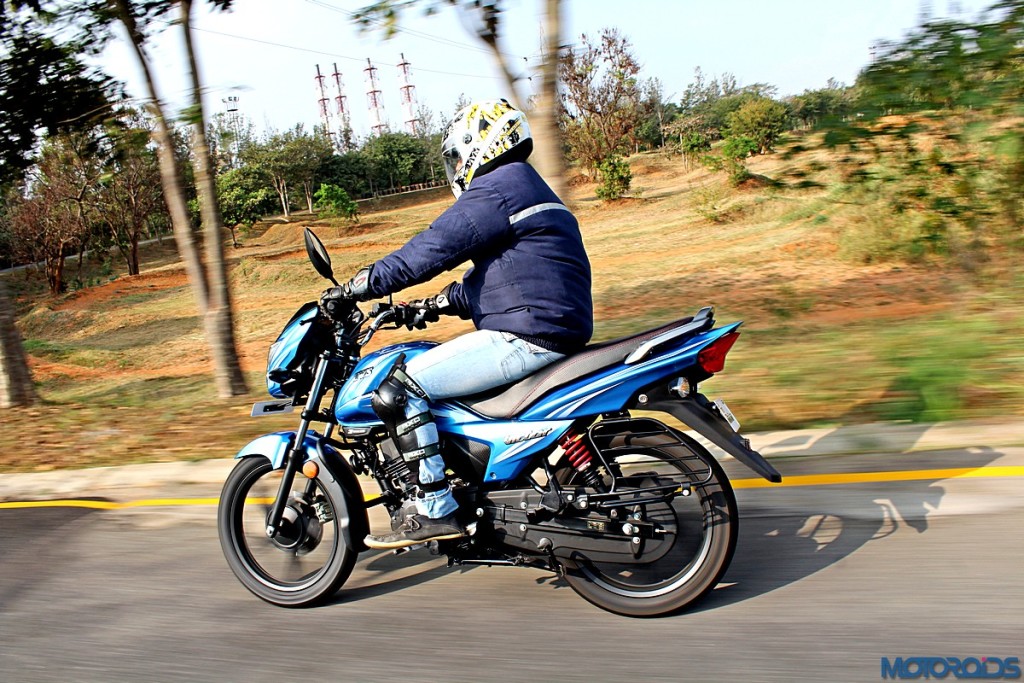 What we did like, however, was the Victor’s enthusiasm when pushed hard around the bends. Even on the straights, we assume that it’d give its competitors a run for their money. Rest assured, it’s a bit more than just a weedy commuter and has that spunk.

The 2016 TVS Victor has been priced at Rs 49,490 for the drum variant and Rs 51,490 for the disc brake version (both prices ex-showroom Delhi). At the above price point, the Victor does manage to undercut its rivals, apart from truly offering more of everything. TVS, you’re doing it right.