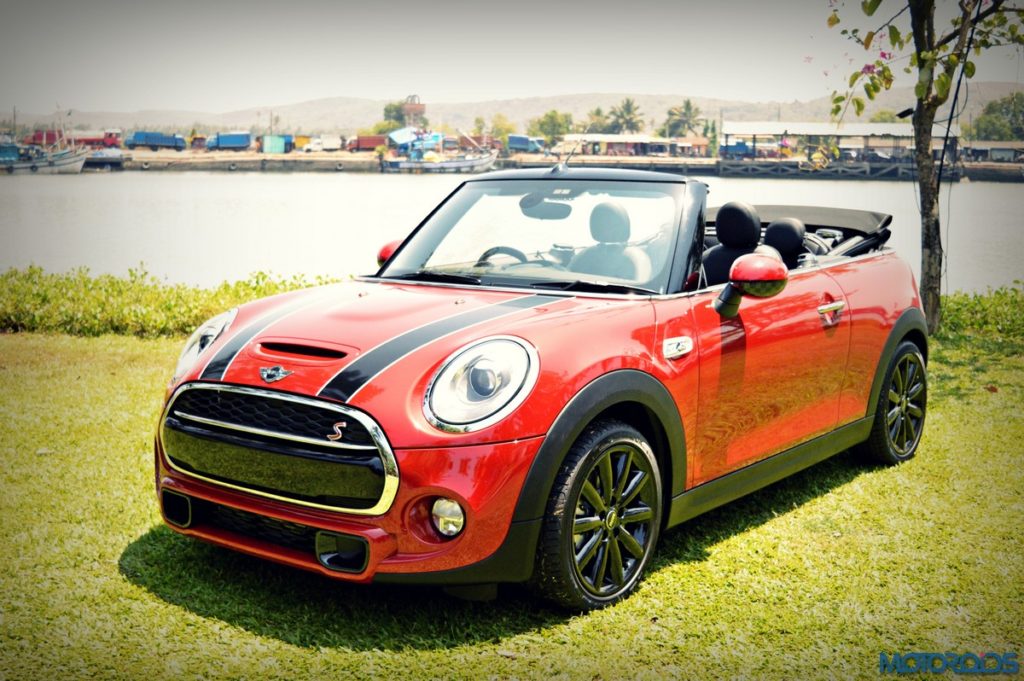 The soft top of the new Mini Cooper Convertible retracts in exactly 18 seconds, enough to finish contemplating what this drop top is all about – style. Within the footprint of a Suzuki Swift, or thereabouts (check the dimension in the specification sheet you nerds), you, my rich friend, will indulge in a lovely smelling, compact tub of leather, wood and chrome. Should you choose to look up, there’ll be skies full of stars instead of the boring old headliner, making the Convertible one of those hotel rooms with a better view that you paid extra for. For the unlimited headroom, you have to cough up an extra INR 30,000 over a standard Mini Cooper S.

Anyways, as the motorized roof whizzed about its robotic antics to retract itself, I held a quiet 30 kph (anything more and the top refuses to go up/down), and got myself reacquainted with the cabin. Oh, and in case you paid INR 90,000 for the optional, woven Union Jack graphic on the soft top, you can watch the English flag unfurl itself as well. It’s a bit of a gaffe really, since, Mini, though originally from the UK, is now thoroughly German, ever since it was acquired by BMW in 2000.

Quick fact: Making its international debut at the 2014 Geneva Motor Show, this is the second generation Mini Convertible. The first generation open topped model, launched in 2004, marked the first ever drop-top Mini in history. 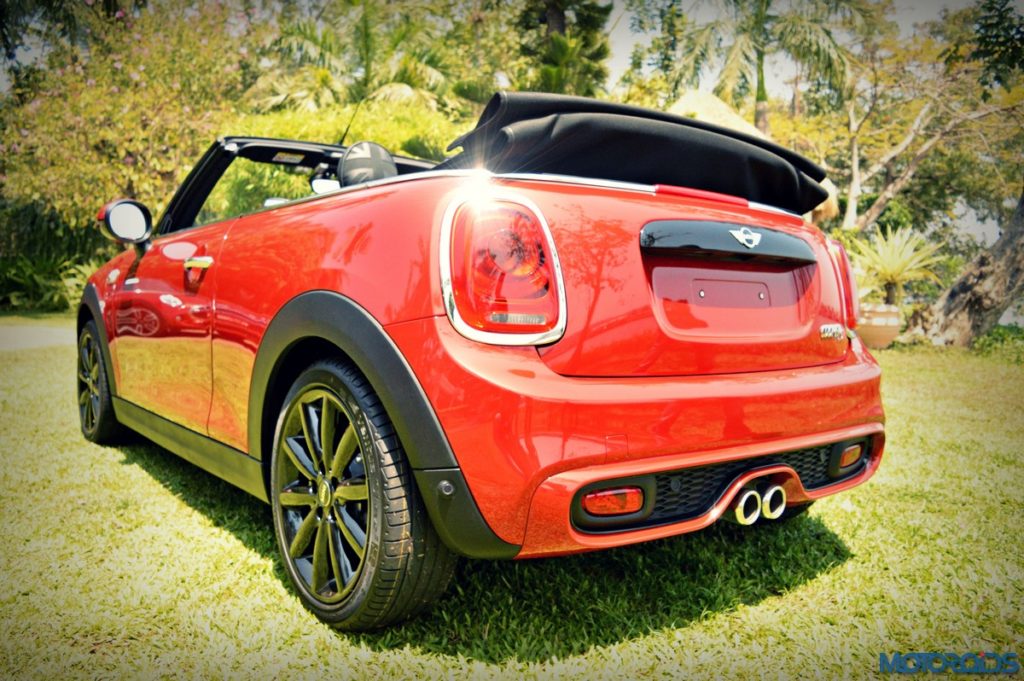 With the top down, the harsh Goa sun instantly tried to singe our hairs, but the Mini’s automatic air-conditioning turned to full blast to fight the inferno. It did pretty well, as we were left with cool wind in our faces, while the sun kissed our heads and the wind barely ruffled our hair. There’s a fitting in the middle called the Wind Deflector which magically whirls the wind over the top of your hair to prevent buffeting. It can be locked into position behind the front seats to avoid unwanted air-turbulence during open-top driving.

Back to the cabin then, its identical to the covered Mini Cooper, with retro-futuristic details all around, including an array of Nuevo toggle switches and lots of circular elements here and there. Like its hard-topped cousin, there are five different leather upholstery combinations to choose from, with names like Cross Punch Dark Truffle and Chester Malt Brown, all combined with one particular Carbon Black. Each of these combinations will cost an additional INR 2 lakhs, and while you get your bottom sorted on your favourite, heated leather, you’d also notice that the passenger seat is not electrically adjustable. The new, centrally positioned optional color display is a generous 8.8 inches in size which displays navigation, entertainment, telephone and vehicle functions using a rotary knob in centre console.

Then there’s the list of optional interior equipment, and should you tick all the boxes, there’s more than INR 10 lakhs worth of goodies crammed in here. The sexiest goods include a 10-speaker Harman Kardon hi-fi system; yours for INR 1.15 lakhs, a head-up display for a cool INR 80,000, and a John Cooper Works leather steering wheel that’ll set you back by INR 30,000. The silliest of them has to be the Always Open Timer, which records the time spend driving with the top open. Oh, and you can also get yourself an interior colour of choice – off-white for INR 45,000, or ‘Dark Cottonwood’ for a palpable INR 60,000. Want some chrome? Get yourself the Chrome Line Interior with a sprinkling of shiny bits for a mere INR 20,000. 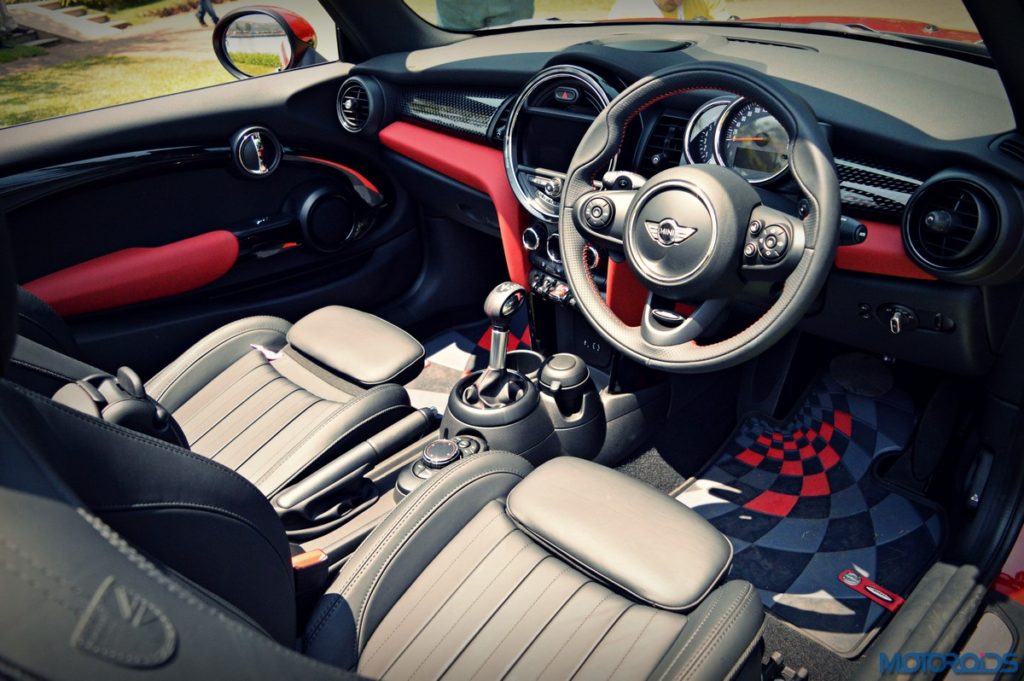 The well-bolstered, stylish front seats with extended swabs feel great to sit on, although there is absolutely no room at the back, unless you’re just a torso with no legs. The rear space is strictly for juniors. Unlike most soft topped convertibles, the top doesn’t entirely disappear into the boot when the roof is down, which means that there is always some cloth flapping around in the rear view mirror. Boot space is capped at 215 litres with the top up.

The underpinnings are the same as the others in the Mini Cooper clan – a UKL platform, transversely mounted engines positioned up front with front wheel drive – and so is the styling, which translates to a Cooper without a roof. As you step outside, you’d notice the trademark Mini styling, with a bug-eyed front end and a rotund demeanour trying to recreate the essence of the original, ‘60s design. It does a great job we’ll have to admit, what with the strategic usage of chrome and curves to arrive at a perfect retro mode.

Like the interiors, the exteriors can be glammed up as well, with optional exterior equipment including a choice of ten metallic shades over the standard colour palette, each costing a princely INR 60,000, while one particular ‘Lapisluxury Blue’ comes at a rather steep INR 1,20,000. Apart from black or white bonnet stripes, optional LED headlights with cornering lights, and extra chrome, you can also opt from a choice of three designs of 17” light alloy wheels, each set being a INR 80,000 option. So there you have it – it is quite a money pit alright, but if done right, you’d be rolling in a fairly unique vehicle by the end of it. 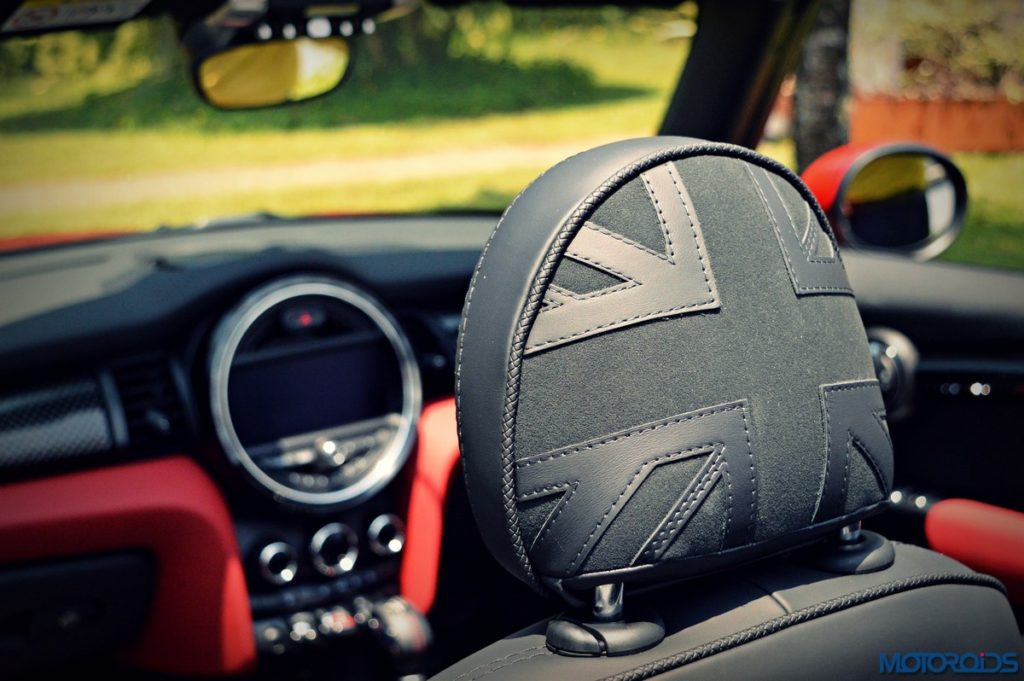 Quick fact: In India, the Mini Convertible can only be had in S guise, which means that it is powered by the same 4-cylinder petrol engine that we tested in the Cooper S last year. The 2.0-litre motor features twin-scroll turbo charging, direct injection, fully variable valve control, and variable camshaft control. Output is rated at 192 bhp at 4700 – 6000 rpm, with a maximum torque rating of 280 Nm at 1250 – 4750 rpm. It also comes with an over boost function, where torque shoots to 300 Nm for brief periods of time.

With the roof chopped off, the chassis became a bit gooey owing to the loss of structural rigidity, but BMW’s boffins stuck a few reinforcements to make up for it. So, there is bracing in the area under the radiator, plenty more under the doors and along with two large V-shaped braces under the passenger area.

While they made a beheaded structure more rigid, the reinforcements added a lot of extra weight as well (close to 100 kg), which means that compared to the hard topped Cooper S, the Convertible does feel a bit lethargic in a straight line, but ever so mildly. While its roofed cousin darts from 0–100 km/h in 6.7 seconds, the Convertible takes a wee bit longer at 7.1 seconds. The upside however, is negligible scuttle shake, and the whole of the car feels well glued together when the roads are unforgiving. 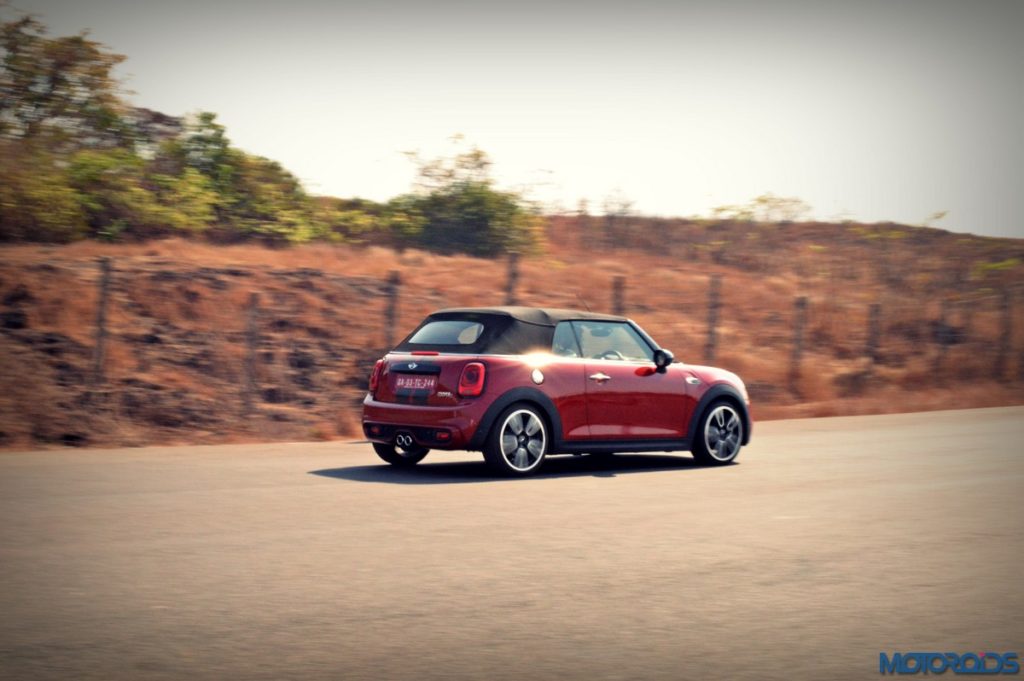 I’ve always liked how the new age Mini rides, and the Convertible doesn’t disappoint either. Agreed, it is a bit firm for Indian road conditions, especially with the optional sports suspension, but if you’re used to performance/sporting cars, you’ll enjoy how every inch of the road is traced and transferred into the cabin, without things getting trashy and skittish. The road surface is honestly channelled through your body, making for a telluric ride quality with a distinctively sporty flavour. The 6-speed automatic transmission does a decent job, and though the shifts aren’t the quickest, it makes the twin exhausts gloriously fart while up shifting. Down shifts also aren’t the smoothest and there’s no automatic throttle blipping while at it too.

It still feels as agile as the hard topped car, and turns in with the alacrity of a spotted deer under attack. Steering feedback through the leather trimmed wheel is a mixed bag, with a lot of artificially induced hardness at low speeds that’s a bit of a bummer if you ask me. However, feedback improves with speed, making the act of steering a car slightly more engaging. But the way it changes directions at the drop of a hat is something truly remarkable, and as rightly advertised, you’d have to head to your local go-kart track to better the experience.

The automatic stability and traction controls prevent the front wheels from spinning needlessly, but also makes hard turn-ins over loose surfaces quite neutral, as you can sense the electronics intervening between you and a crazy Mini going sideways. For the first time ever, the Mini features Driving Modes, which is an optional feature, and gets you Dynamic Damper Control as well. In addition to the standard MID mode, there is a choice of SPORT and GREEN mode. All the modes perceptibly change the characteristics of the car by influencing throttle response, steering feedback and the automatic transmission. Like we had tested last time on both the Cooper D and the Cooper S, these modes make a significant impact on how the Mini performs. 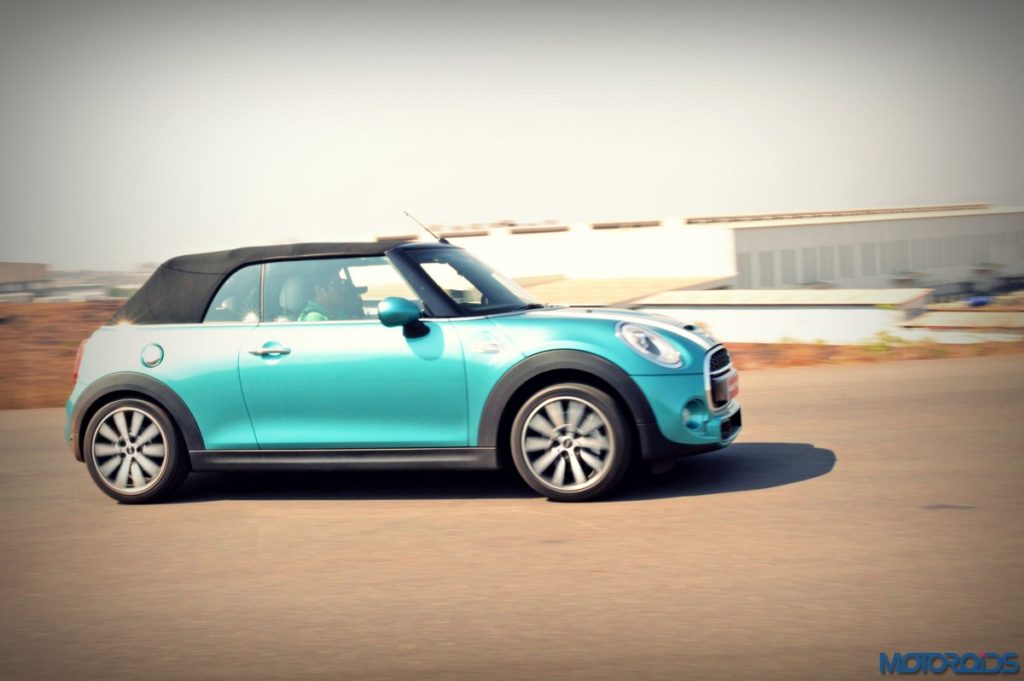 The new Mini Cooper S Convertible then, increases the appeal of the iconic car by leaps and bounds, unlimited when measured in headroom. While the ultimate thrill seekers and the terminally unhinged will go for the hard topped versions, the open-top is more of a beach-side trotter, best enjoyed with shorts bursts of turbocharged performance and hearing the optional sports exhausts pop and crackle. The Convertible is not about red-lining and hitting the apex; it’s more laid-back, and lets the wind caress your hair. If you want a mix of both the worlds though, the Convertible is also available with the more potent JCW kit. Though prices start for the standard Mini Cooper S Convertible at INR 34.9 lakhs (ex-showroom), have a nice time optioning things up before you reach Mercedes S-Class levels of money.