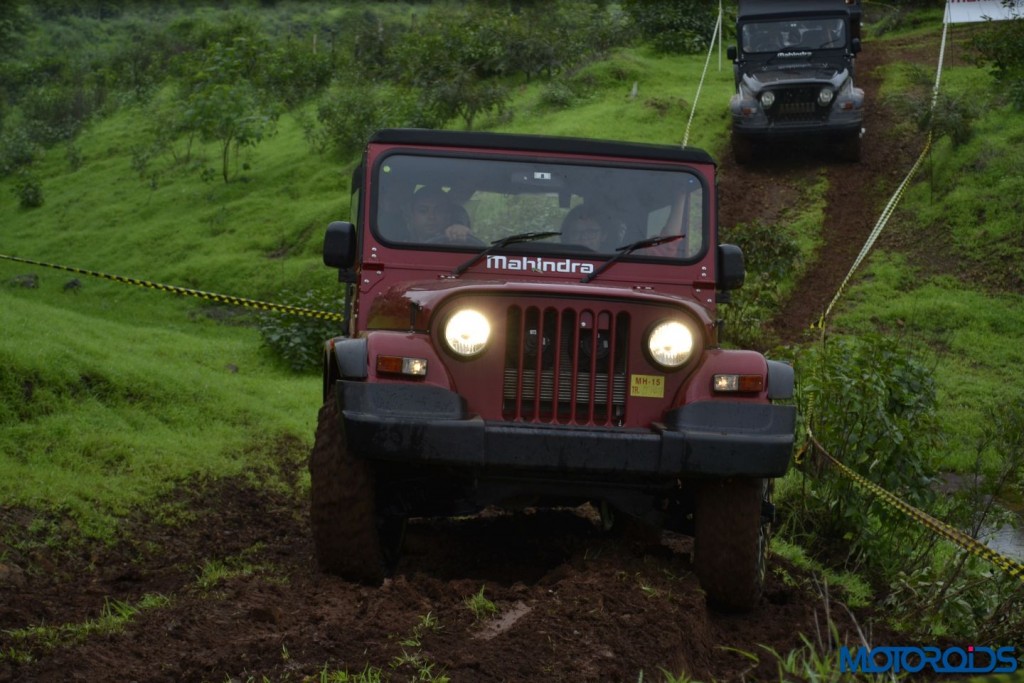 The Classic CL340 was the first Mahindra to shed the UV maker’s utilitarian image. A Rastafarian cousin of the rugged MM540, the Classic was the rebellious one, with its bright red paintwork, liberal usage of chrome, bucket seats, and stylised roof canopy.

The Thar, launched in 2010, owes its genes to the MM540 and CL340 cousins. The already rugged framework was given additional, and much needed muscle in the form of the 2500 cc, CRDe diesel engine, while other friendly touches, like air-conditioning, power steering and radio were added.

It’s time for a new Thar then, and we sampled it at the Mahindra Offroading Acdemy in Igatpuri, near Nasik. The new Thar CRDe has already been launched, and retails for INR 8.03 lakh (ex-showroom Mumbai). We have already reviewed the exterior and interior changes in great detail. Incase you missed it, read about them here.

How do the revised interiors feel? 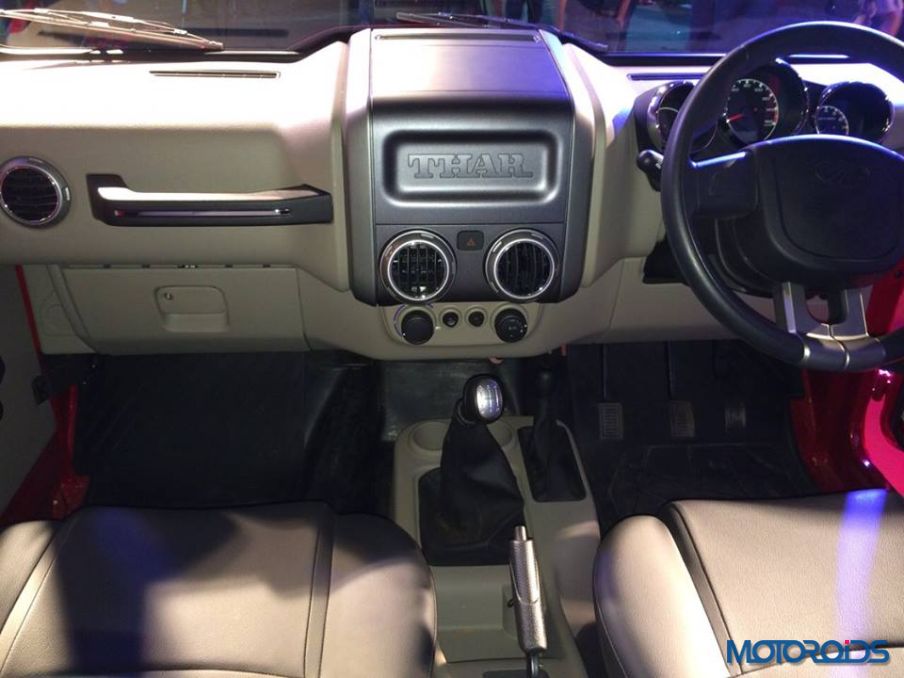 Climb inside, and the high-set, truck-like driving position reeks of authority old school fervour. Visibility out of the slit like windscreen isn’t all encompassing but it’s all a part of the “all things Jeep” attitude. The new steering wheel is posher than before, feels better to hold and properly positioned with reference to the driver’s seat.

Overall levels of fit and finish have improved in leaps and bounds, considering the earlier Thar was severely archaic. For 2015, one can even opt for dual tone upholstered seats with Thar branding and new colors for the re-designed canopy. For the rear occupants however, things aren’t that great, as always. The grab handles aren’t fixed, and keep sliding according to the vehicle’s position.

How does it drive? 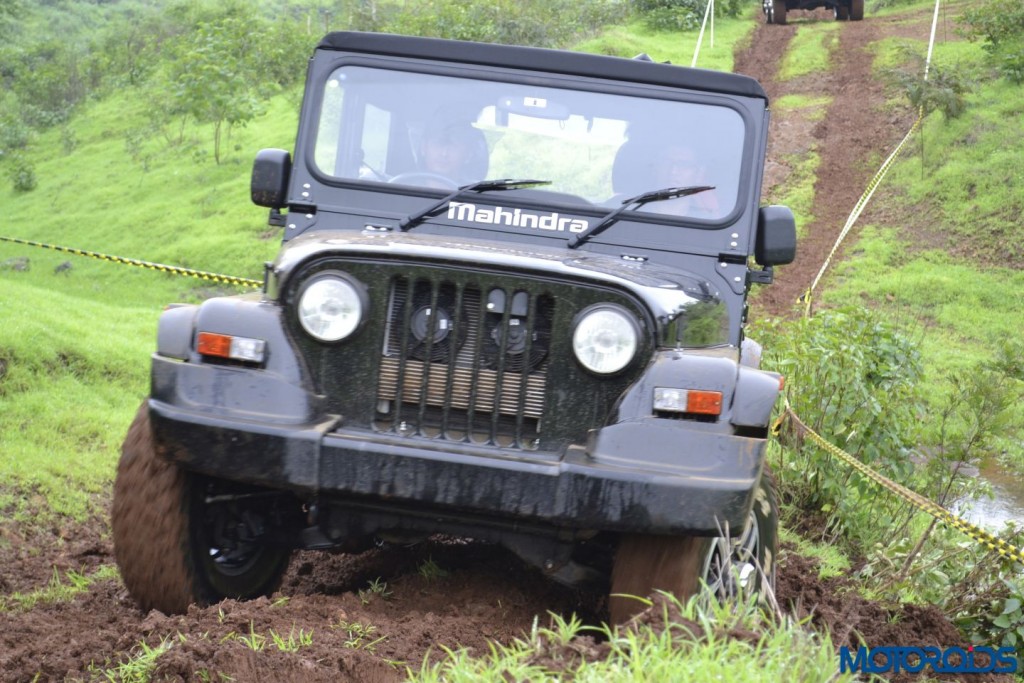 Apart from the enhanced exteriors and premium new interiors, the new Mahindra Thar gets an automatic rear differential locking system. The rest of the mechanicals continue unchanged, which means that power comes from the tried and tested, 2498 CC, CRDe diesel engine, and is rated at 105 bhp. A peak torque of 247 NM sets in at 1800 rpm.

A five-speed manual transmission reigns in the horses, while a standard 4WD system with high & low ratios ensure proper off-road prowess. The Borg Warner transfer case comes with a 2 Speed gear reduction – HIGH 1.0:1 and LOW 2.48:1.  While the High mode is to engage 4×4 for normal or moderate off-road usage for increased traction on all four wheels, it’s the Low range ratio that really pulls one out of the muck.

Pedal action is harder than average, and the shifts on the gearbox aren’t the slickest around. But being refined isn’t what the Thar is built for. 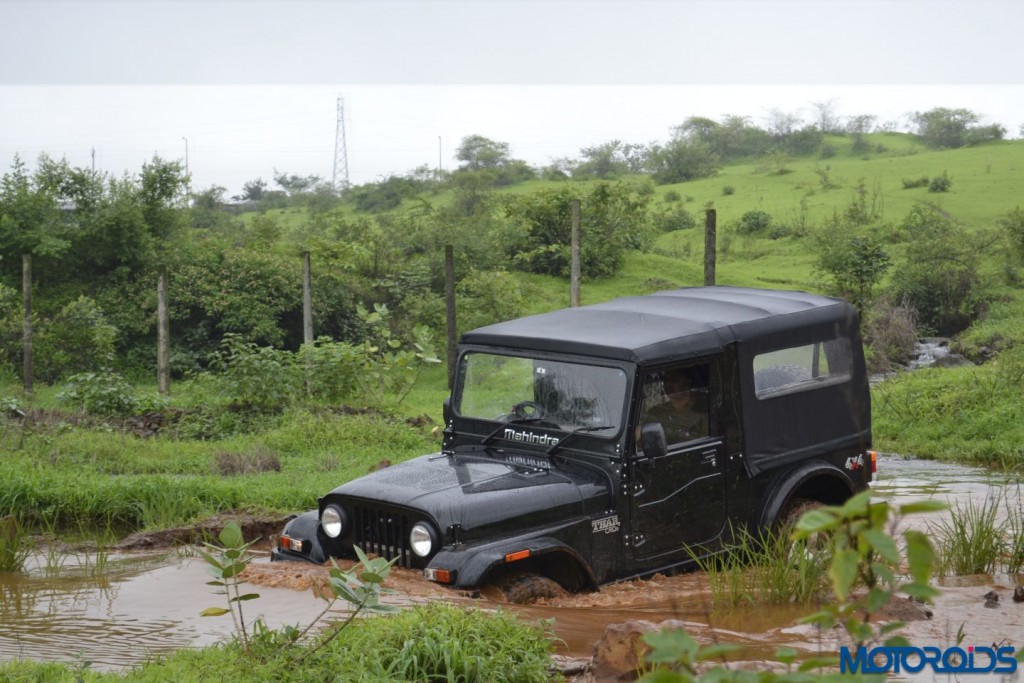 The extreme 44 degree approach angle and 27 degree departure angle, along with the short overhangs makes sure that the Thar still retains its wall scaling abilities. A short wheelbase and a 200 mm ground clearance add to the cause.

Having a low ratio allows one to have more torque and power (but lower speeds) for any given engine speeds. This helps is climbing obstacles with aplomb, without the wheels spinning away and causing slippage. Stick the new Thar in 4L (low ratio), and it crawls up 40-degree inclines without breaking a sweat.

Our brief drive around the entire circuit of around 45 minutes, which was full of treacherous surfaces, mud, slush, and knee deep standing water. The Thar barely scratched its bottom on anything.

Now, we’ve already driven the earlier Thar in its natural habitat. The only new addition for 2015 is the an optional MLocker by Eaton. This mechanical locking differential engages automatically during low traction situations when a wheel speed difference of 100 RPM or greater (left-to-right) is detected, thus ensuring the vehicle gets the best traction possible.

So basically, it senses the tyre which has lost traction and locks it to transfer maximum drive line torque to both the tyres, and can help you pass your way out of a difficult situation. 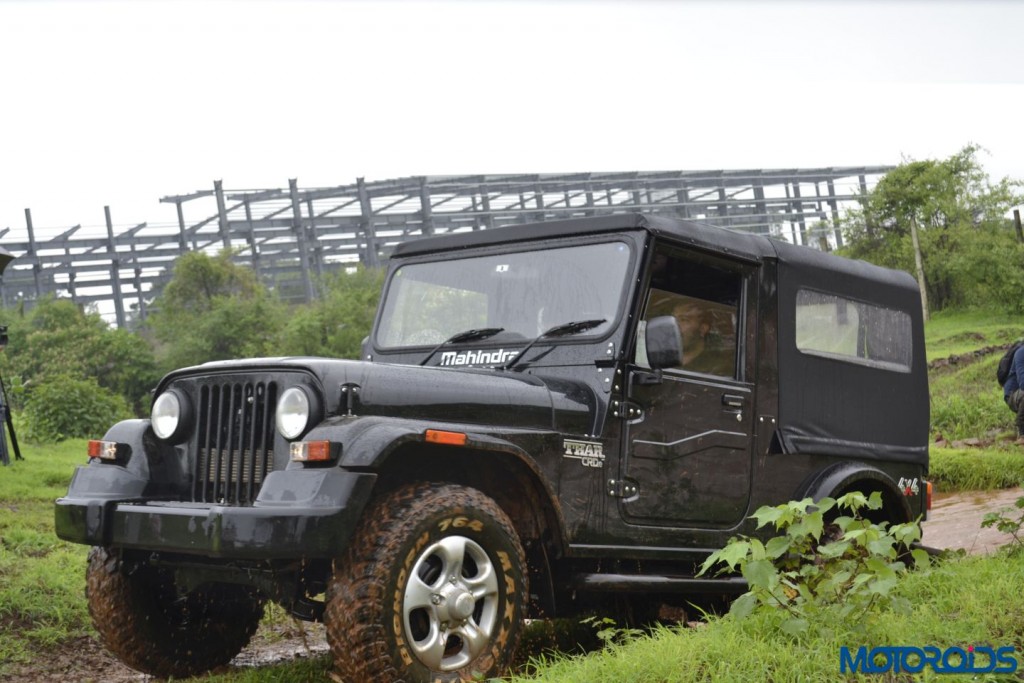 We wish the new Thar CRDe had the manual option for the new locking differential, since the diff-lock may sometimes do more harm than good. Imagine a scenario where on a tough track, the vehicle goes on three wheels and the tyre which has traction is the one stuck in mud. The more power it gets, the worse it will make the position of the vehicle, which will dig itself in.

Remember, the diff-lock’s sole function is to prevent getting stuck, the same may not help one to get out of a sticky situation. As it happened our Thar got stuck in the mud which can be better described as chocolate slush, the 4×4 with its rear diff lock came to a stand-still and we had to wait for the recovery car which got us out using a tow winch.

The two things we wished we had that very moment were – manual diff-locking, and optional front diff- locks.

We appreciate Mahindra’s step forward with its Offroad Training Academy. With time we will get to see well-trained offroaders taking their 4×4’s to its maximum potential. We feel, with the right driving skills the fun and excitement you can have in the THAR is virtually limitless.

Is it worth it? 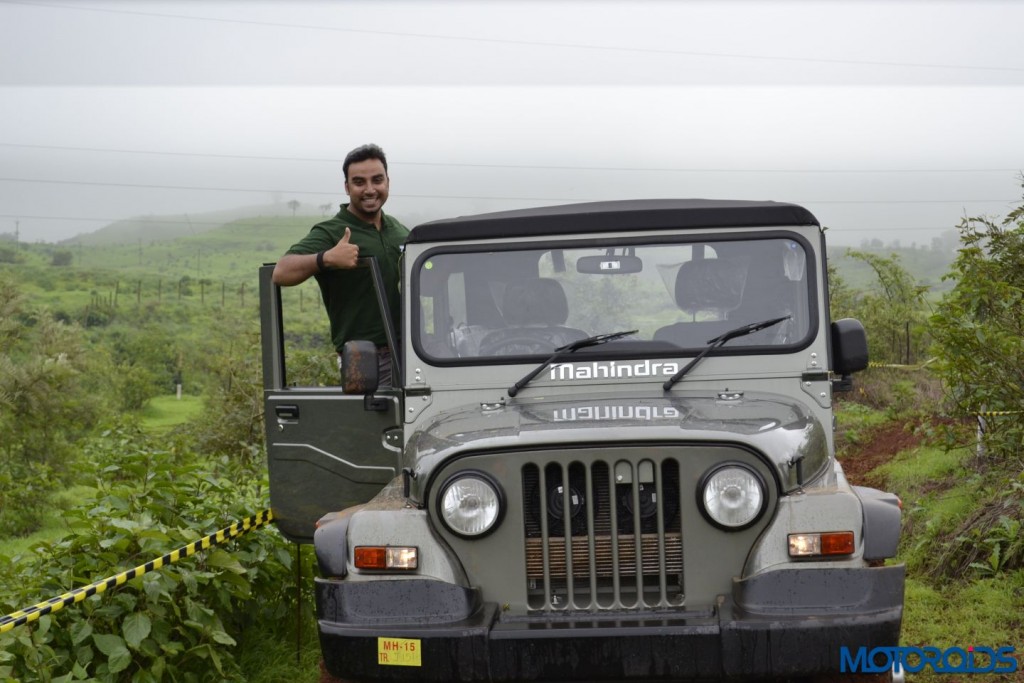 We wonder if we should call it overpriced, but with no signs of the new Force Gurkha, the new Thar has virtually no competition. Fanboys will instantly lap it up without a second thought, but we hope Mahindra had offered more.

The new automatic locking differential is a welcome addition, but as a standalone feature, doesn’t sound very convincing. A manual option should have been offered, along with optional front diff- locks.

The new exterior embellishments are neat, but come across more as a half-hearted effort. Agreed, anything more would have totally ruined the Thar’s character, but we believe things could have been resolved with more panache.

The interiors are thoroughly improved over its predecessor, and could possibly milk in a set of new owners. So, for those seeking a rugged, go-anywhere vehicle which could also double up as a daily driver, albeit with a few compromises, the Thar fits best.

Worry not, the Thar is still a fiercely capable vehicle when the going gets tough, and for that very reason, coupled with its iconic, macho looks it warrants a buy – a somewhat fitting evolution to the MM540.