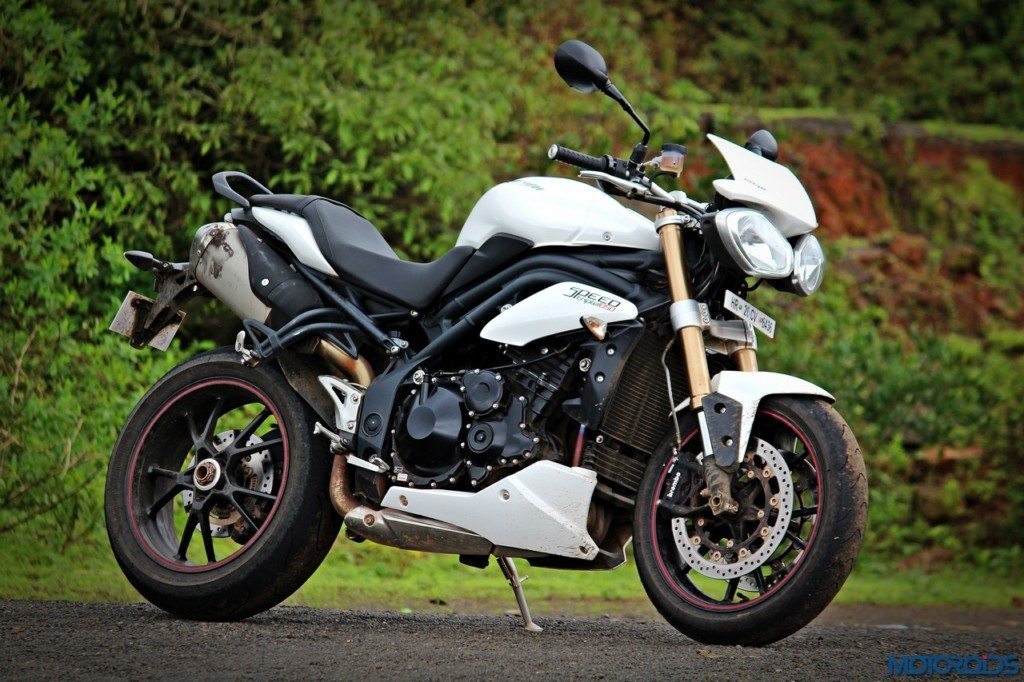 As I get astride the Triumph Speed Triple, I feel a bit like Peter Dinkalge, because even though I’m not vertically challenged (at 5’8”), only the tips of my boots contacted terra firma. So, yes, the seating position is a bit high-set, but the seat itself is quite comfortable, at least infinitely more so than the saddles that the mean and green Kawasaki Z-boys have to offer.

The seating position is a bit forward biased. Though not super-bike focused, but it still means that you end with arms filled with jelly after a long ride. But apart from high seat, everything is so compact and assessable that you’d be forgiven for thinking that you’re astride a liter-class machine. The clutch is adjustable, so is the front brake lever, and as I was about to find out later, its compact footprint will make the Z1000 feel like an obese seal, especially when slicing through traffic. 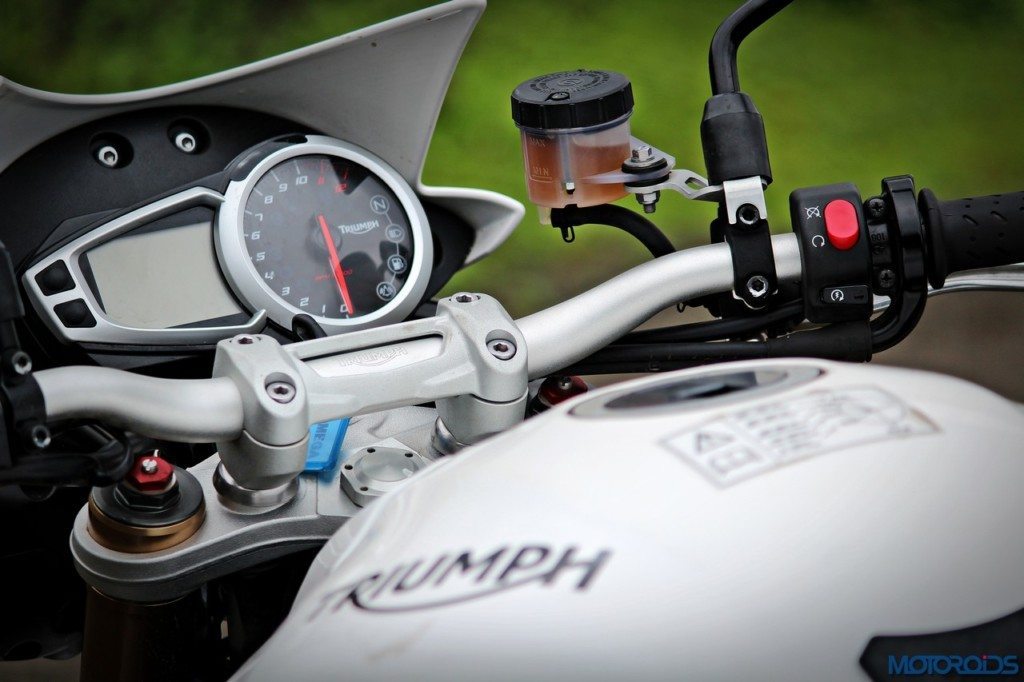 Right then, I thumb the starter, and let the throaty, three-cylinder thrum settle, as I tried to decipher the rather simply laid out instrument cluster. Except that there wasn’t much to decipher at all, because the Speed Triple chooses to stay pure with no riding modes at all. The only riding mode is you. So you’ve got your usual meters and lights and computers measuring tips and lap times. The engine sounds angry and potent, breathing fire out of a couple of high mounted exhaust canisters.

The clutch is hard, like pulling on a hand pump lever with your fingers, and if you’re not used to riding these things on a regular basis, you’ll be grimacing every time you move your wrists for next two days. Like an overconfident bigot, I smacked open the throttle a bit more than necessary as soon as I hit the trafficked, city road. But hey, the Speed gave me the exact, peachiest thrust that I wanted from a performance motorcycle under the circumstances. 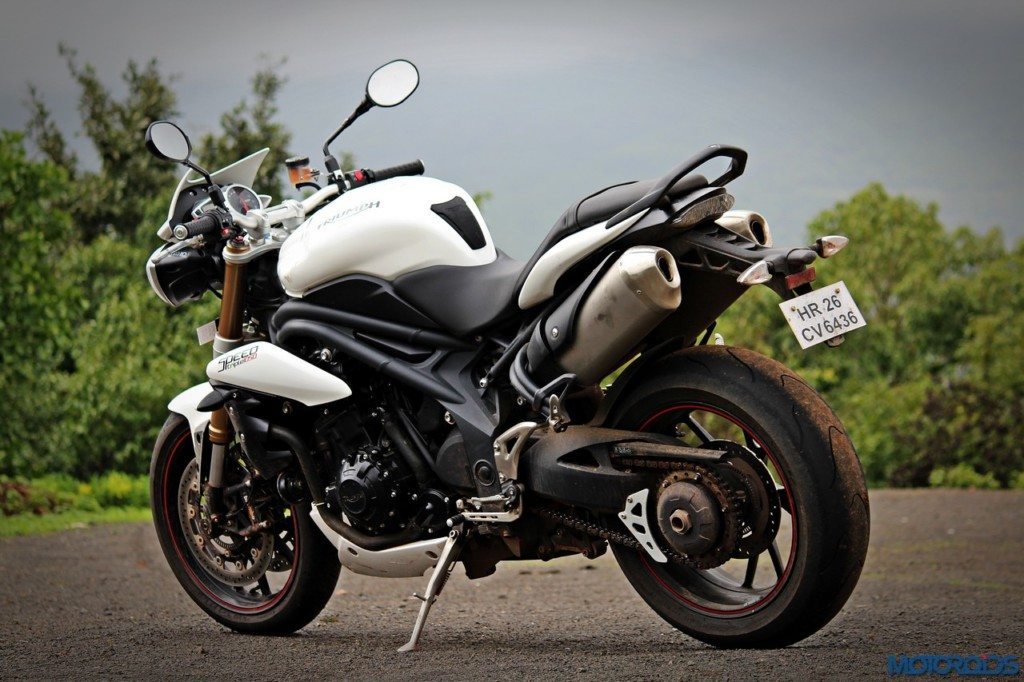 You see, in the lower and medium engine speeds (from 1,000-5,000 rpm), the Speed Triple delivers power like the taste of the creamy froth that floats over freshly brewed beer piping up in your mug. You lick your lips, as the first hints of a merrier night-to-come start to show up in your brain. In the urban-o-sphere, with the engine ticking below 6,000 revolutions, the Speed Triple will never alarm you with its power. Its lay is very predictable and builds with a sort of laze that’s almost perfect. There’s none of the visceral, arm-off-handlebars force with heavy handed throttle inputs, just a linear surge that makes it quite the beast that listens to you, and maybe even reads your mind.

That doesn’t mean that it isn’t fast. It IS properly rapid, with the ton coming up in just three seconds flat. But that’s when you ride it like your head’s burning like Ghost Rider. In day-to-day riding, which involves a saner pace, the Speed is probably one of the sweetest motorcycles to ride out there. The cherry on top is the exhausts popping and crackling on the overrun, while the beautiful sound manages to be a strike a permanent chord inside your mind that plays for quite some time to come. 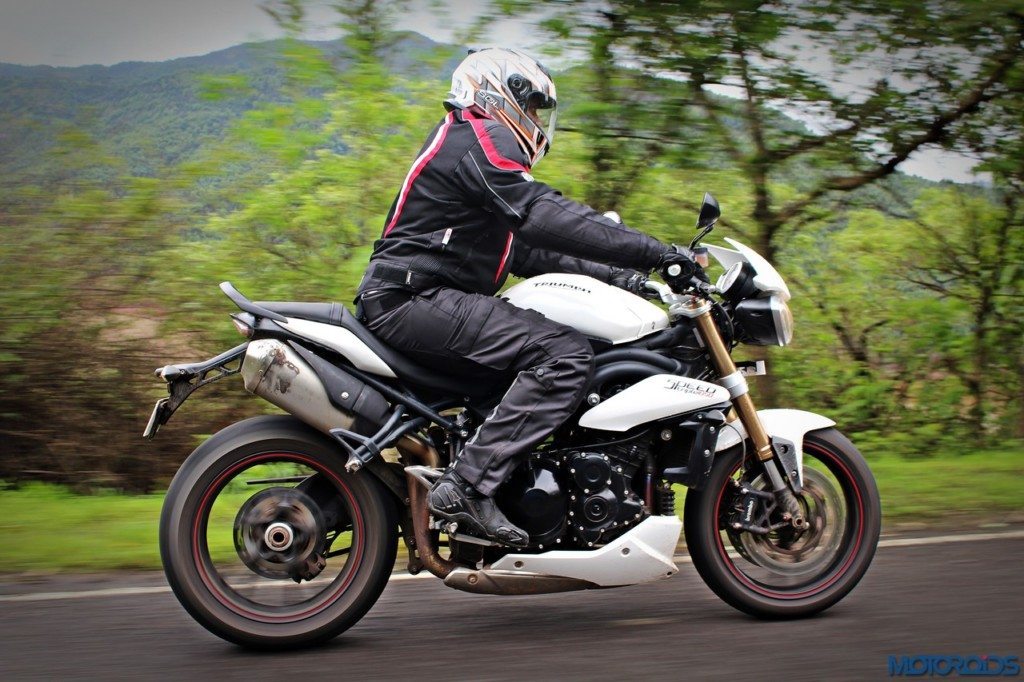 You can ride the Speed hard in traffic, with power coming easy and smooth, like scoop through gelato. Upshifting right when the power starts its almost near-vertical ascent at over 6,000 clicks, and the Brembo front brakes biting off chunks of speed like white sharks teething on bait, the Speed feels like licking cream. Obviously, being a slightly old-schooled performance machine with no electronic aids (not even traction control), it doesn’t like tootling at lower speeds in higher gears. You have to constantly, yet gently keep tugging at its leash.

Then there’s its size, or the lack of it, considering it packs one liter of punches. Once you’ve gotten used to the 200 kg+ weight, it’s darn easy to cut traffic short with the right wrist and fingers. The Speed can go through gaps in traffic that’d make a liter-class wince, and then some more.

So the Speed can wriggle its way easily through the urban crawl AND put a chunk of its power down really well while at it, AND stop on dime too. So, apart from the heavy clutch, we already have a winner before its hit the highway. After you’re done negotiating the busy streets with the laidback, yet meaty power delivery in the lower revolutions of the engine, the highway run is pure bliss. 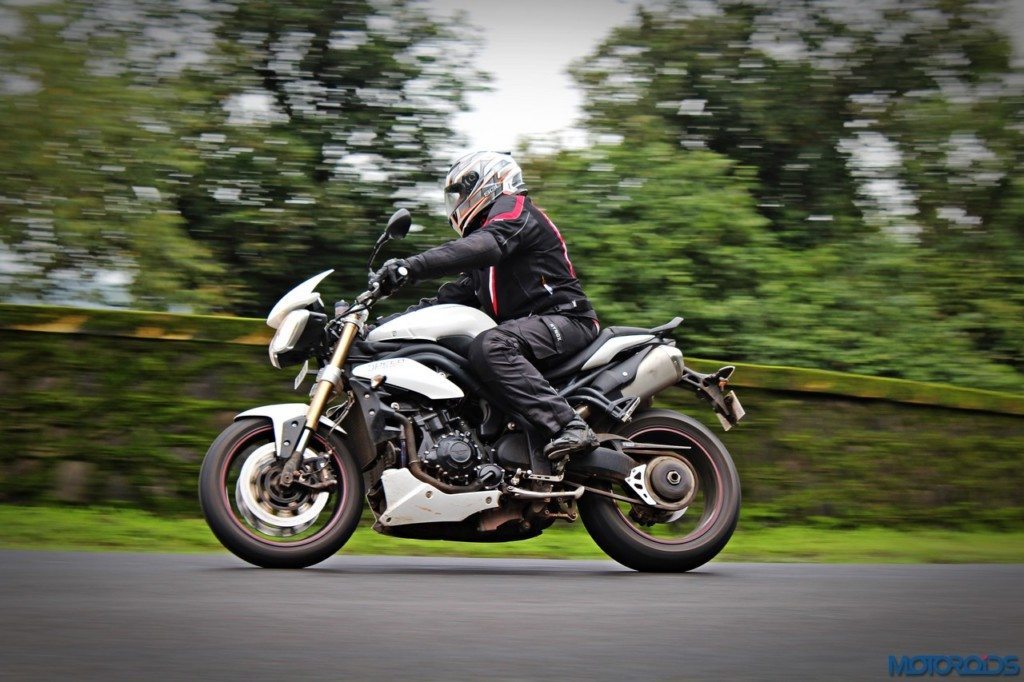 Don’t expect the 135 PS and 111 Nm to explode between your legs after you’ve crossed the 6,000 rpm mark. It’s not violent, and it doesn’t punch you in the guts every time you pull the throttle all the way to the rev limiter that’s some clicks north of 10,000 clicks. Instead, power arrives with this heady nonchalance that causes more Dopamine accumulation in the brain than the speedometer accumulating velocity. The Speed gets the power down controllably well.

If you’ve ridden modern, sharper and more potent litre-class motorcycles before, the Speed Triple’s speed probably won’t impress you. That’s not a problem though, at least for me. Because, slicing through a sparsely trafficked highway with the throttle whacked open and the twin exhausts glorifying the sound of evolved internal combustion, you’ll feel more like Tom Cruise from Mission Impossible than Rossi or Pedrosa on the track. For me, it’s the former role playing that’s more exciting and more enjoyable on a day-to-day basis.

It’s more about the unbridled excitement of riding, the Speed, rather than the calculative, focused, electronically controlled, warp speed achievability of a modern super bike. Yes, there is definitely a step in performance in the higher reaches of the Speed Triple’s power band, but it is almost blurred with the linearity, the long-legged and easy going power delivery. 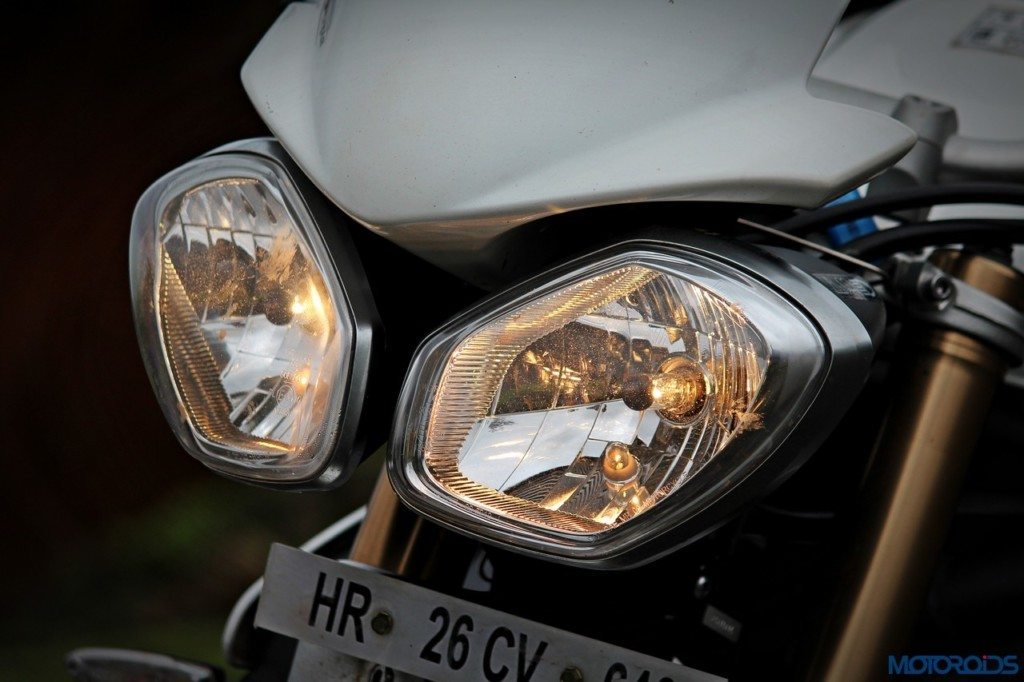 As for the ride, the Speed Triple’s stride is definitely on the firmer side, but it still has that suppleness that makes it go over bumps and irregularities on the road with some amount of grace. It’s no sports tourer soft though, and you’ll still need to stand on the foot pegs over the rough stuff at decent speeds as the Showa shocks don’t like to be disturbed much.

Around the bends, the Speed’s twin-spar aluminum frame, the steep steering angle, and the short 1435mm wheelbase make it a peach. It’s a bit sketchy while entering the corner, and squirms a tad while changing direction at first, but once you’ve locked it in, the Speed corners with the kind of confidence and sure footedness that is therapeutic on so many levels. 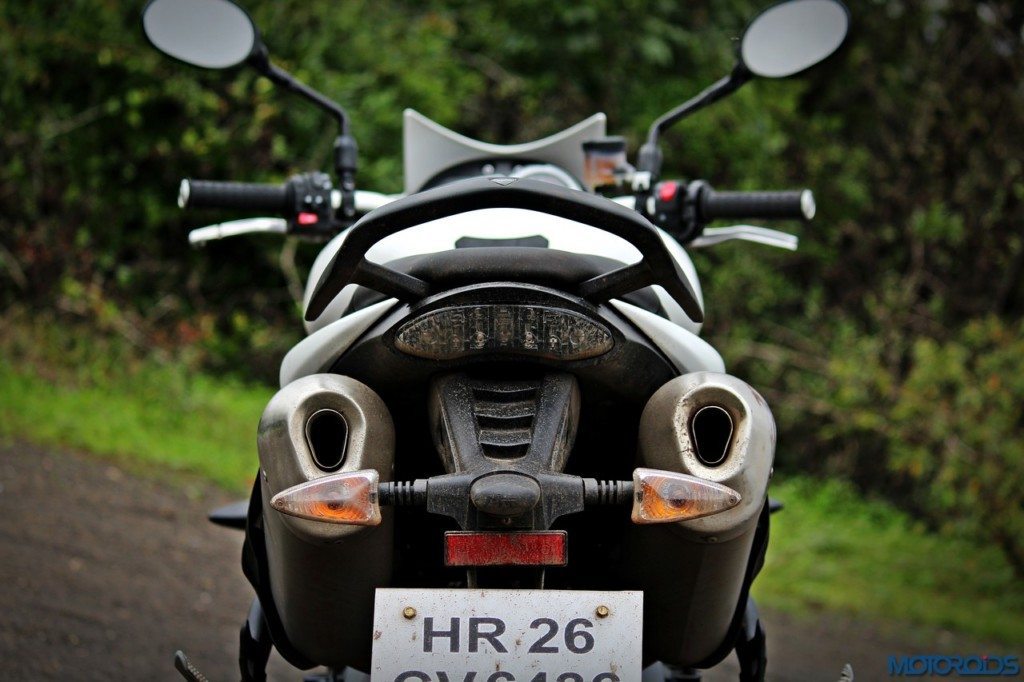 Mid corner, it responds instantaneously to small corrections if needed, while the same suppleness of the suspension also helps iron out mid corner bumps well. Get the rhythm right and take your time to fuse your body with the Speed’s romp, and it is immensely rewarding.  It was never a large motorcycle, but it shrinks further around you as you take on corners. The ABS equipped brakes offer mighty stopping power, but in keeping with the theme of the motorcycle, don’t feel overwhelmingly sharp and are very progressive instead.

As for the appearance, it isn’t a diva. But once you get used to the bug-eyed front end, the white capped excuse for a wind deflector and the itsy bitsy pieces of bodywork, it looks just fine. It’s got a purposeful stance, and I quite like the twin, upswept exhausts. 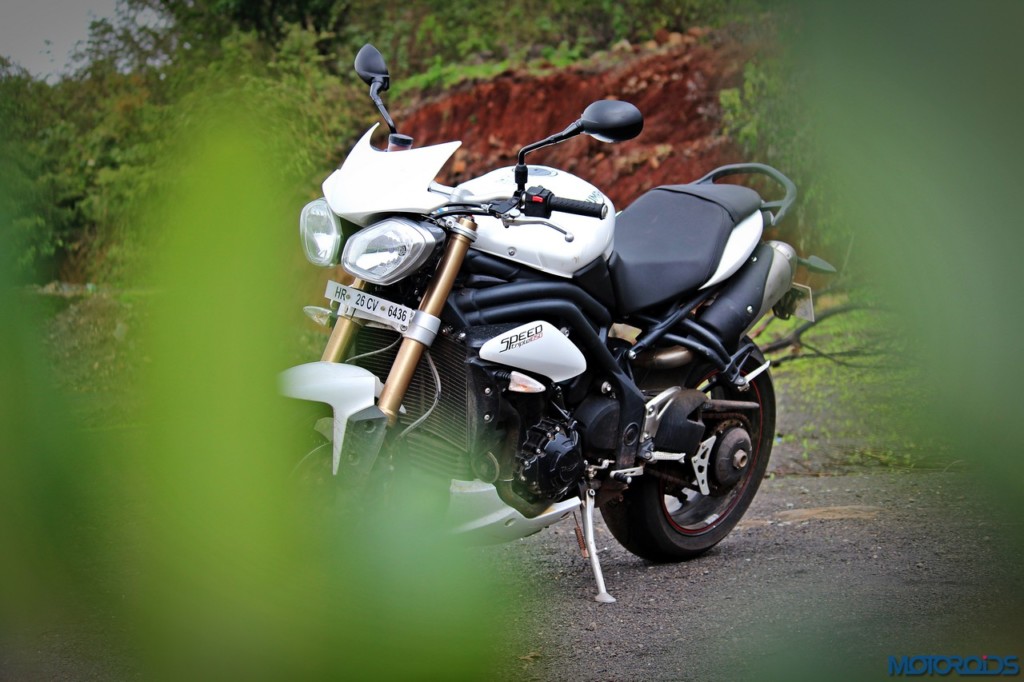 Right then, at INR 10.4 lakh (ex-showroom Delhi), the Speed Triple couldn’t have been a bigger bang for your buck. It hasn’t got the methodical animosity to its acceleration that some of its more powerful German and Japanese counterparts have, but they’re more expensive. In the process, the Speed Triple becomes more of a wholesome motorcycle that sacrifices on some power, but is still devastatingly enjoyable unless you’re terminally unhinged. It’s perfectly usable on a day-to-day basis, and is easy to live with. We hear a new one is around the corner, with ride-by-wire and a slightly revised riding position. Till then, the old one rides just great.