Want to go off the road and want to do it the hardcore way without spending too much? Your options are either limited to the Force Gurkha or the very popular Mahindra Thar. Lacking in the horsepower department until now, Force Motors has given their mountain goat some more teeth in the form of a Mercedes-Benz Sourced, 2.2-litre OM611 range, 140 hp, 320 Nm motor. This is quite a leap in terms of power, considering the Gurkha until now, only had 85 Hp to play. This is also the same motor which until now, powered the now discontinued Force One SUV.

Visually, the Force Gurkha looks pretty identical to its 3-door Xplorer cousin. However, mechanical changes are exhaustive, and paired with that motor is a Benz-sourced 5-speed manual gearbox which mates with the motor via a dual mass flywheel. The transfer case is operated via a lever which allows selection between high and low range. A shift-on-fly system is missing, however, both the live front and rear axles get diff-locks. 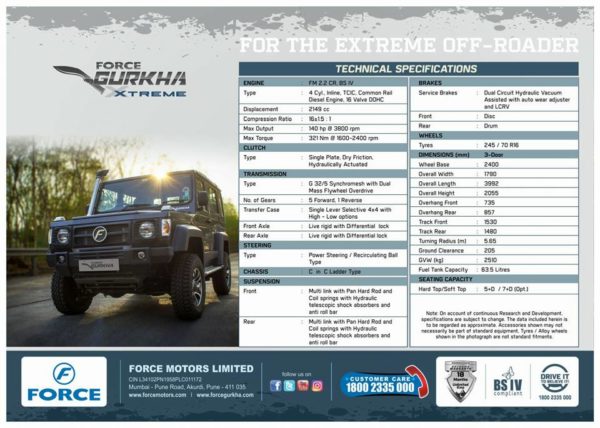 Suspension updates include a new multi-link setup at the front and back with anti-roll bars. Braking is via a front disc and rear drum setup which stop the 245/70 R16 rubber from rolling. Fuel tank capacity stands at 63.5 litres, the Xtreme Gurkha weighs 2510 kilos and comes in a 3-door form only. Approach , departure and breakover angles have improved too, where the numbers stand at 44, 35 and 29 degrees. With a ground clearance of 205 mm, the Gurkha Xtreme can wade through a depth of 550 mm. 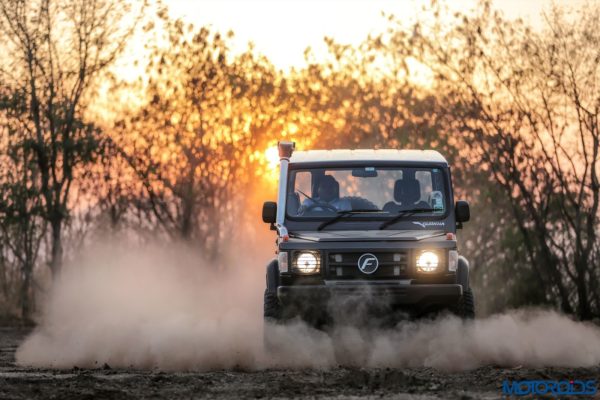 Priced at 12.99 Lakh (Ex-showroom), the Force Gurkha Xtreme is nearly INR 2.5 lakh pricier than its Xplorer variant. However, for that money, you get 55 Hp more, and updates which make this off-roader, more capable. In comparison to the Mahindra Thar though, Force’s service network is still very sparse. If you wish to buy one, bookings are now open.