Home Aprilia Your litre class ‘superbike’ is a bullock cart : The Aprilia Tuono V4 1100 Factory teaches you why 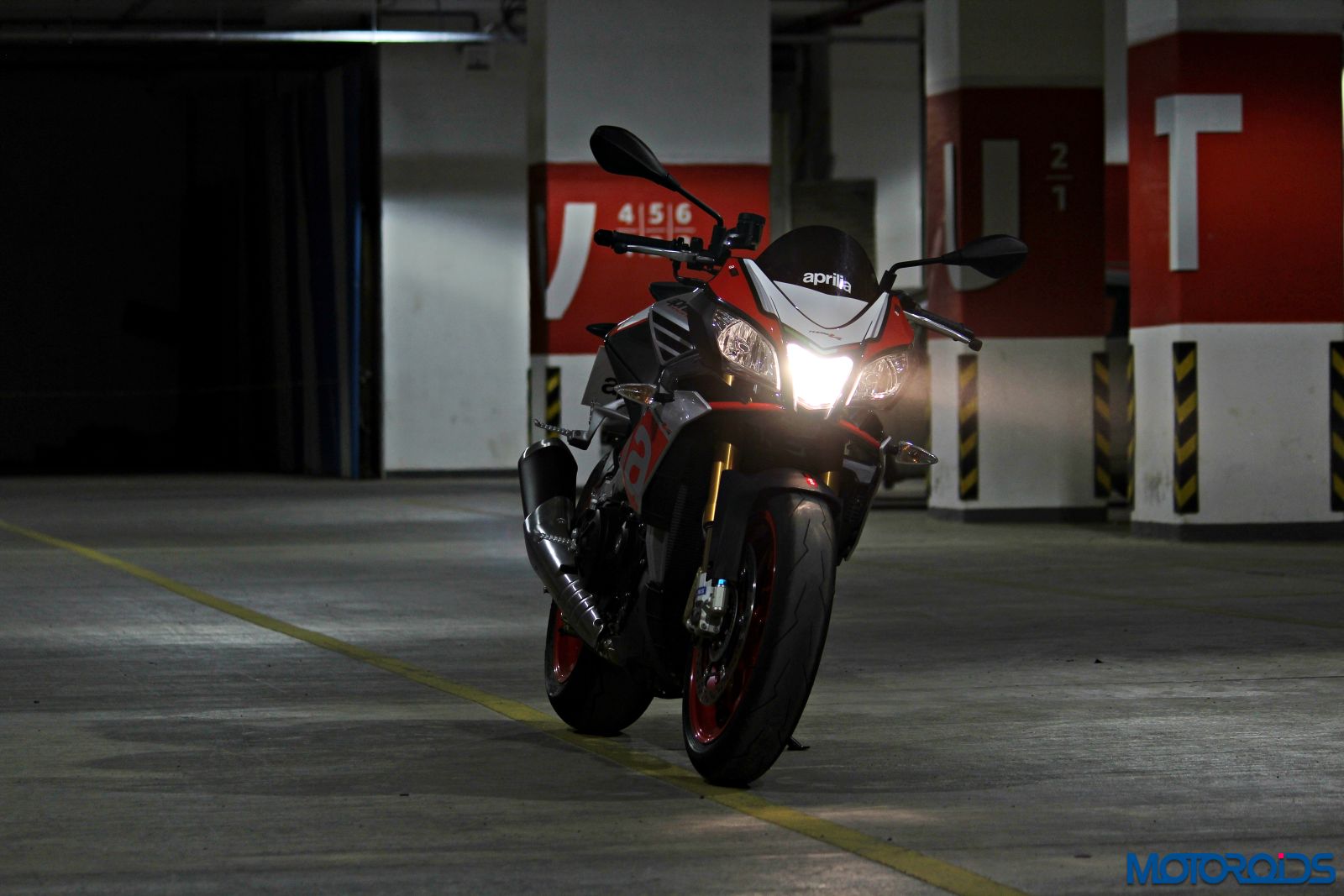 Generalizing experiences that were once considered to be at the pinnacle of human adventure seems to be the norm these days. So they now have plans to negate the effects of gravity and fly you into outer space while you sip on some bubbly. No wonder then, a naked motorcycle with 175 bhp on tap, something which would’ve been considered as a ride reserved for Gods a few years ago, is now available for the general populace.

Aprilia must have a bedlam inside their factory premises, for there is no way that something like the Tuono V4 1100 Factory could’ve made it to production otherwise. Representing the common sect ready for cutting edge, we got to experience the next level on two wheels and here’s what time spent with menacing finesse felt like. 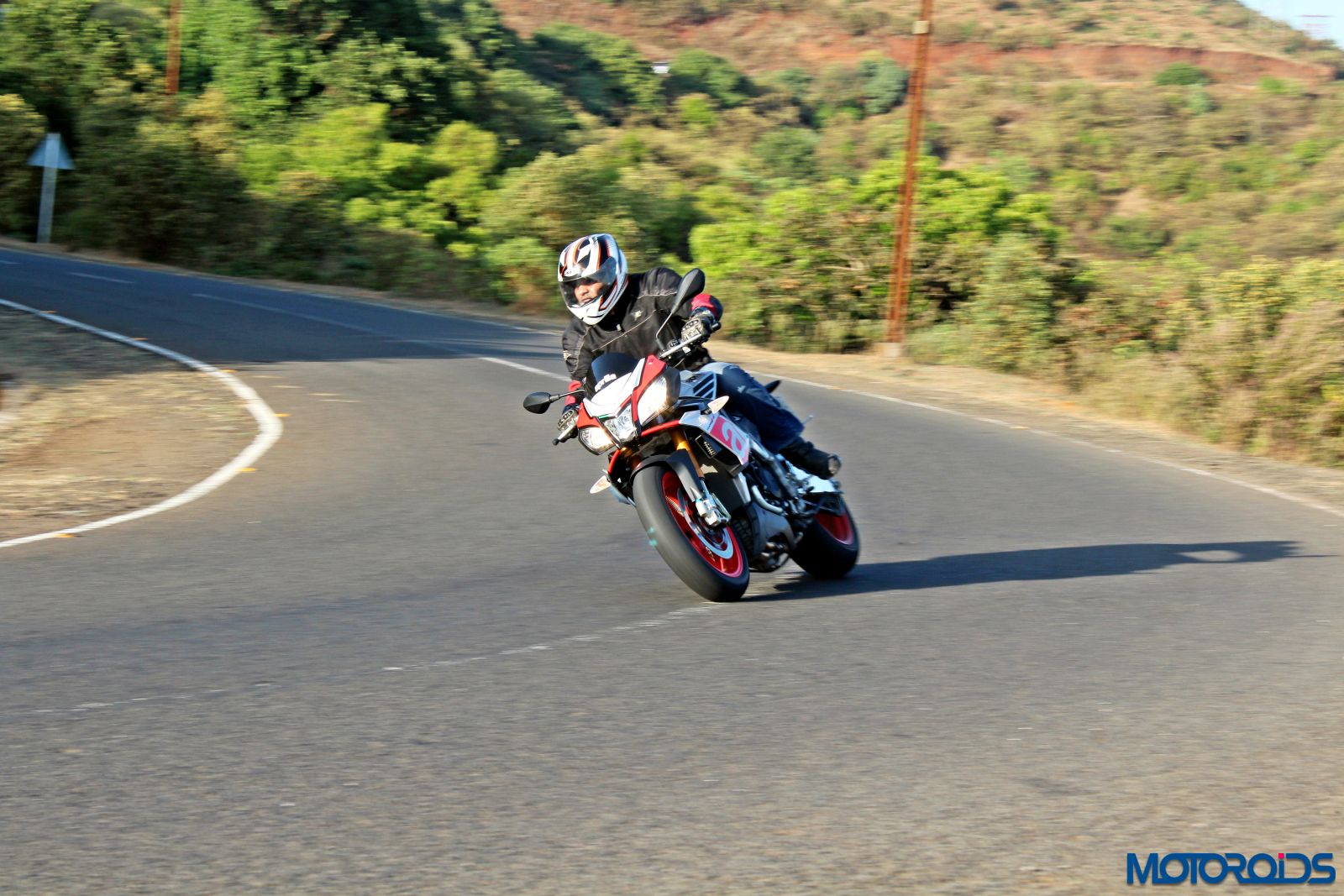 As you thumb the Tuono to life, a violent furore sneaks from the exhaust and settles into a perturbed, grunt filled maelstrom. On the move, it isn’t a regulation inline 4 shriek, but a distinctly angry growl that took me back in time to the Sachsenring, where I was seated right opposite the Aprilia Gresini garage, listening to bike number 19’s naked vocals bouncing off the pit wall.

My stint with the Tuono began with the electronics set to the strictest mode. It didn’t take long to understand that cocooned in a protected crib of 3 levels of Anti wheelie control, ABS, eight levels of traction control and supremely precise fueling, I was riding 175 bhp of dementia on two wheels like it was an everyday machine, and riding it fast. 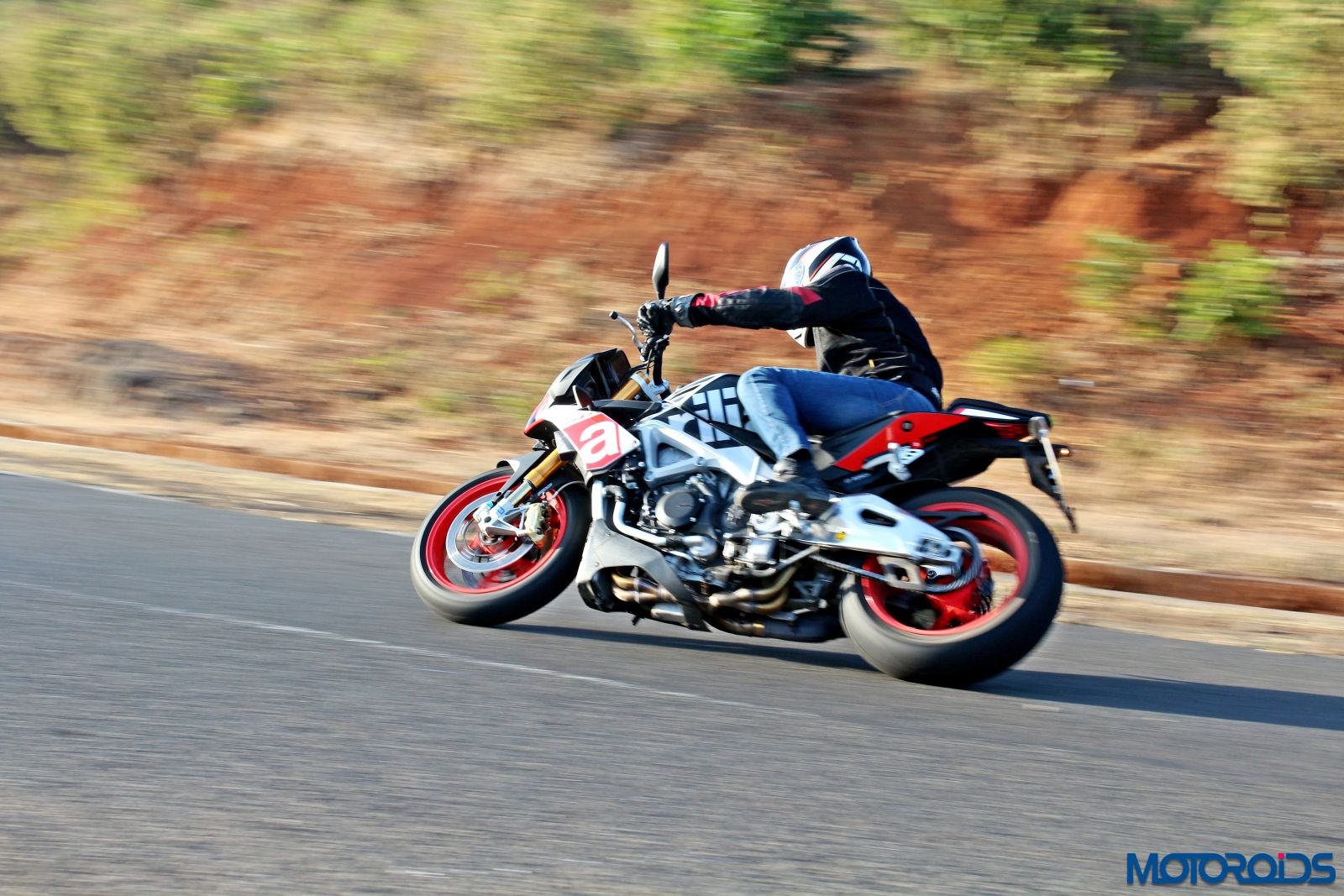 So like an eager toddler who tries to break out of the shackles of a baby walker, I summoned those gizmos to act at 1/3rd of their capacity and the Tuono mutated into a savage creature with its claws out. Even a slightly abrupt twist of the wrist would send the front wheel pointing skywards, the rear would twitch in joy and suddenly the Tuono had all of my attention. On an empty stretch, the bike could unicycle into the horizon and it would do that without asking you to be a skilled Ruski employed in a circus.

That 1100cc motor has grunt spread out throughout the rev range, but beyond 7000 revs it goes into annihilation mode and by the time it reaches 9000 clicks, it massacres your idea of momentum until peak power rings in at 11k and you summon another gear to repeat the hysteria. In all honesty, never before had I ridden a liter class motorcycle that would let you enjoy its power on everyday streets in India without making you feel that you might not make it home that night. For the way the Aprilia Tuono delivers its lunacy, it elevates your capabilities beyond belief and as long as you stick to basic principles, those electronics will do their bit to keep you on the saddle, and succeed; they also try to keep that front wheel from prancing, and almost always fail, if you so wish. 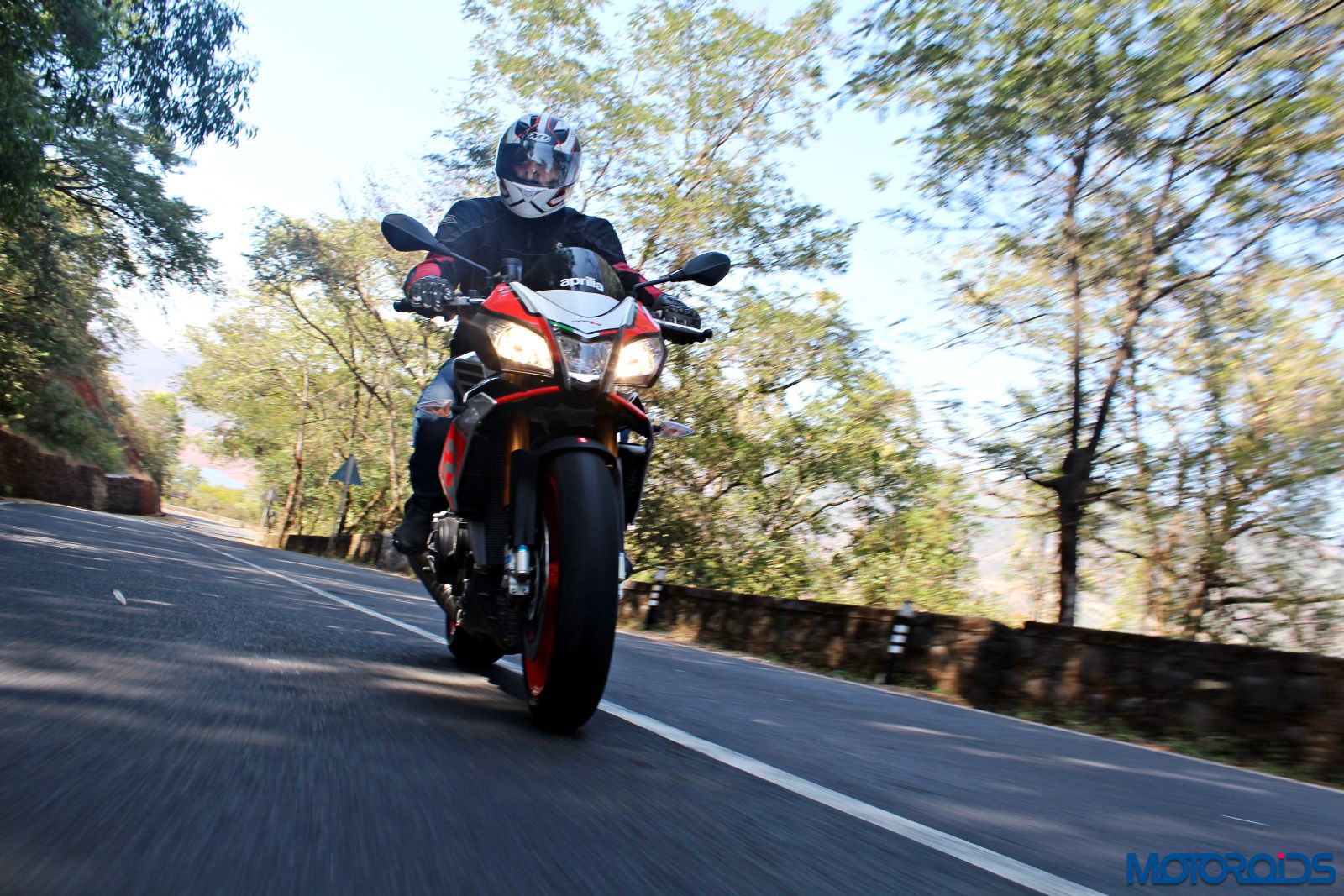 For an 1100cc motorcycle, the Tuono V4’s clutch is a knife cutting through cheesecake, the biting point always precise like hitting the cookie base below. The magic of engineering shows its pretty face in the form of that super precise quickshifter, meaning you’re violently, yet precisely upshifting without any loss of momentum and every toe movement triggers a release of endorphins in the body. The catch here is, there isn’t any coming back to normal shifting once you’ve tasted this piece of kit. Although downshifting still calls for your left palm to pull a lever. Brakes are top notch and whether you’re carelessly grabbing a handful at silly speeds or tapping the lever slightly, the bite is assuring, the feedback phenomenal and the whole system ensures the Tuono stops well before where you think it should have.

The Tuono’s dual beam chassis is the nectar that pipes out its sweetness to the wheels through the as gold as it looks Ohlins setup. The bike might weigh more than 200 kilos with a tankful of fuel, but all that weight vaporizes like fumes once you’re on the move. The bike is deceptively flickable around bends and will fool you into believing that you’re riding a sub-500cc naked, only with four times the power. Diving deep into a right hander, picking it back up and leaning it into the left hander that followed, felt like an electric act accomplished with panache. And we were doing this while still maintaining ridiculous momentum which had all of us muddled. 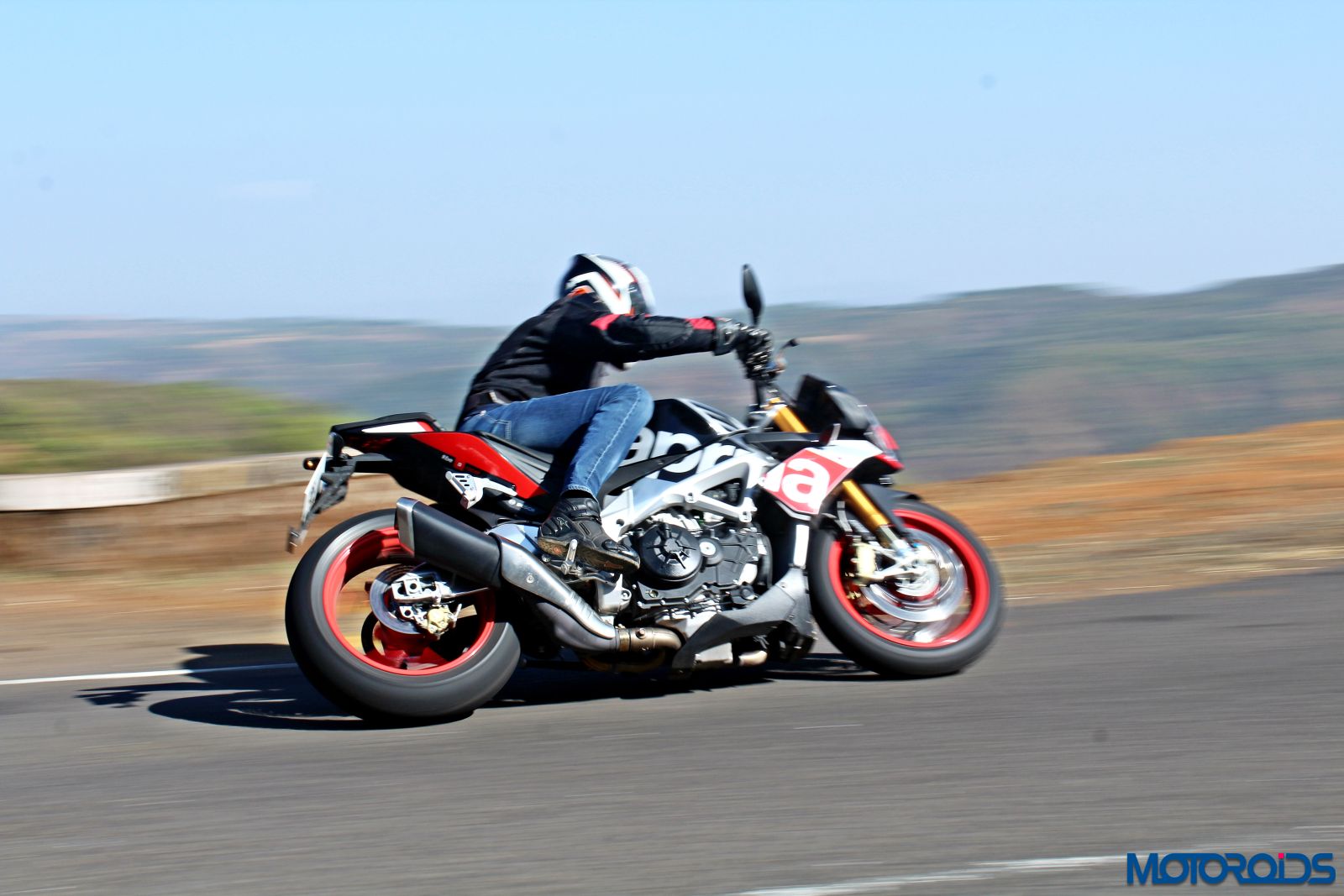 Credit also goes to the spacious seat which lets the rider move in all directions, and with that flat handlebar, it takes away any preconceived drama that one imagines before riding a machine this powerful. All this while, those super sticky Pirellis do get the credit for keeping it bolted to terra firma, but the suspension adapted to our kind of roads as if it was an automatic setup which just knew what to do. It felt slightly mushy at the rear at first, but then a few turns on the dial next to the spring slashed out any blunt edges that remained.

What did I not like? The fact that I sat too tall and on the bike, rather than in it, but that is a personal thing. Also, switiching to high beam only leaves the central unit on among the three, which lacks terribly in intensity,and is more like a glorified pocket torch lighting up the road ahead. That means, you’re almost always riding with your left index finger holding the flasher in low beam to light up all three sources of illumination. 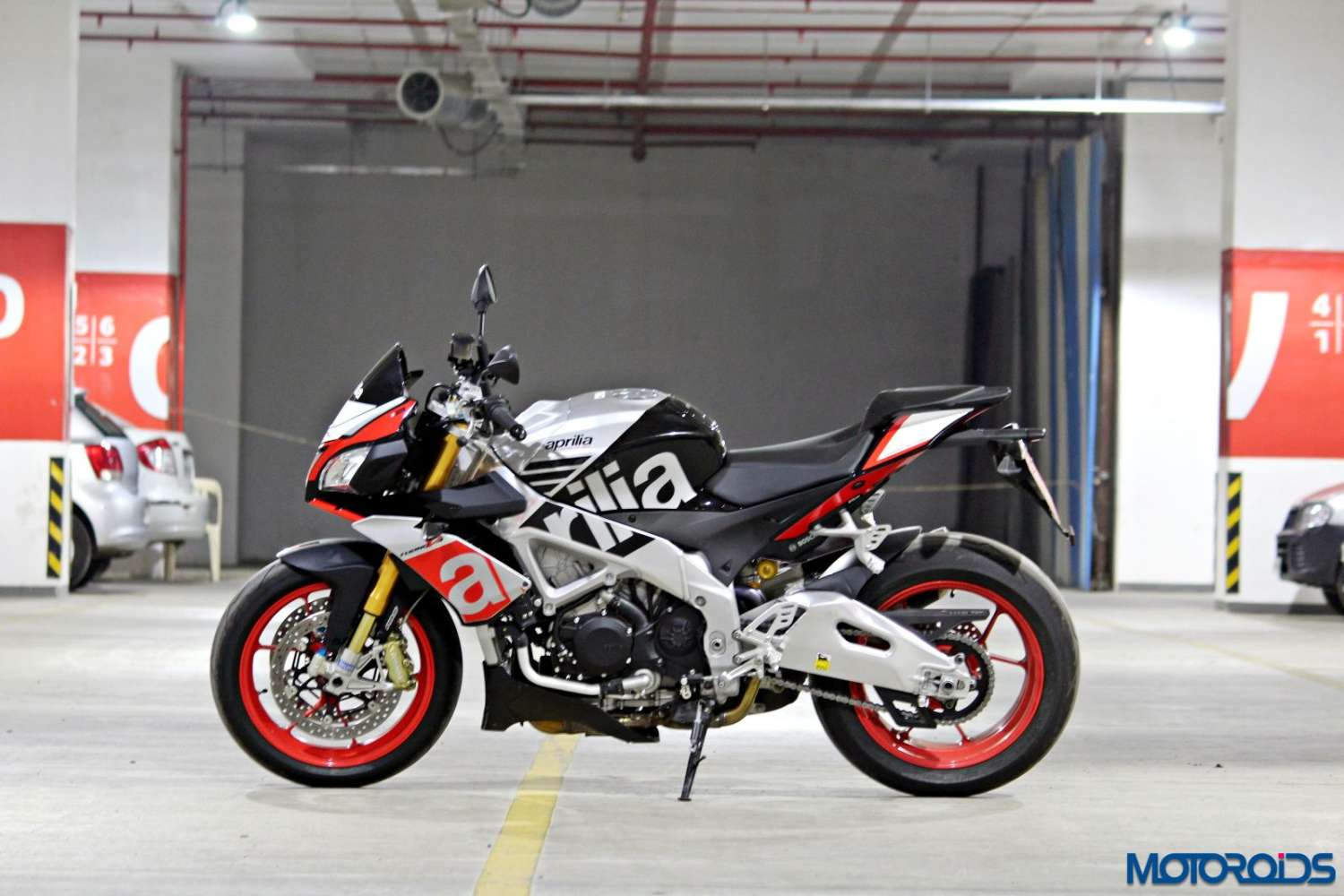 What did I Come back with? The Aprilia Tuono 1100 is perhaps the sum of all learning mankind has had from making motorcycles over the years. It is spookily brilliant in every possible way, and also, in ways I could never have imagined. But the trouble is, it’s somehow all about precision engineering and very little art, and you don’t expect anything coming out of Italy to be like that. There’s not a tangible thing wrong about this motorcycle. A spotless Moon if you’d like. Reason why it has left me feeling weird.

You see I’ve never been brilliant all my life, perhaps why I don’t find a connect with the Tuono. It is that ideal student who is irritatingly good at everything and while you’d secretly want to be in his place, garner all the accolades, you somehow don’t like him because you just can’t be like him. So you go back and hug your friend who’s still been asked to stand out in the sun for not doing his homework. Perfection is a weird thing. 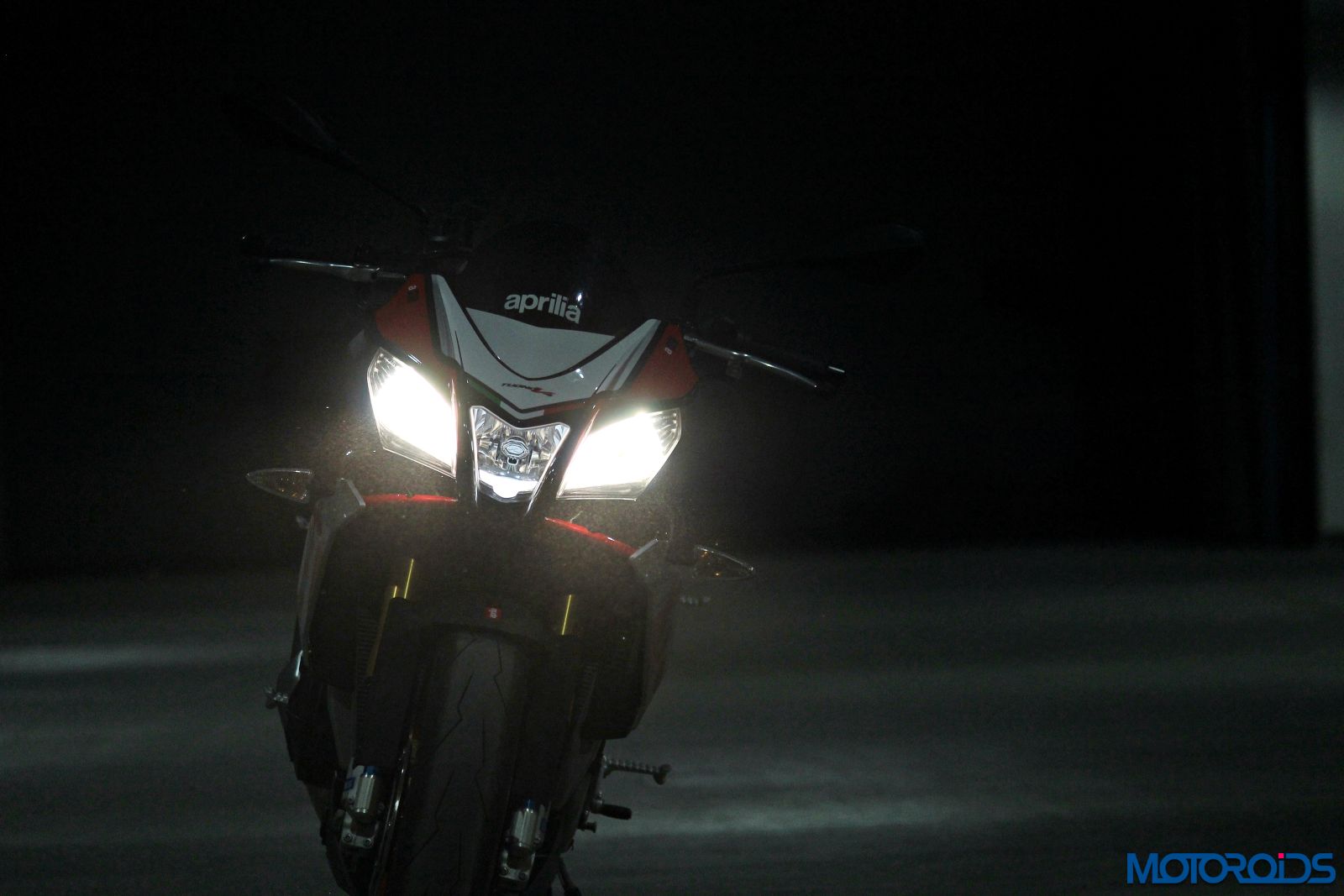 Love they say has never blossomed under cloudy skies and red wheels and toony livery never cut it for me anyways. Although I can’t seem to figure as why am I feeling this sudden urge to be rich. Its maybe the games this bike has been playing with my head. Doesn’t take away the fact that the Aprilia Tuono Factory is right now among the handful of flags that proudly flutter at the highest peak of motorcycling, wherever it stands tallest.