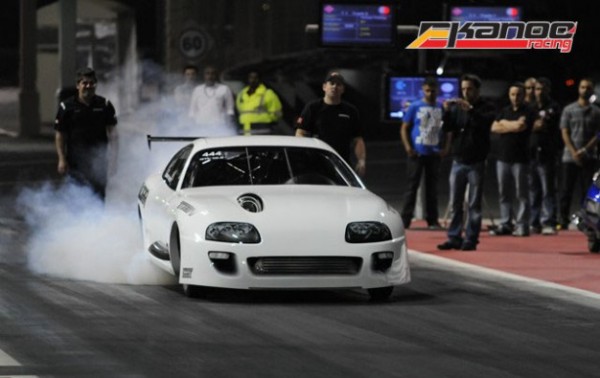 Ladies and gentlemen, meet the new king of the drag strip, this Toyota Supra by EKanoo Racing.

Piloted by American driver Gary White, this heavily modified Supra screamed to the quarter mile mark in a mere 6.05 seconds, clocking 387.69 kmph at the exit, at the 2014/2015 Bahrain National Drag Racing Championship held recently. So, as you might have guessed, it’s anything but a hack-and-slash mod job.

The 2JZ inline-six petrol engine that powered the last generation of Toyota Supras is still there, but it is now aided by a mammoth 98mm turbocharger eking out every last ounce of horsepower from the engine. Transmission duties are handled by a Liberty five-speed drag-racing gearbox sending power to the rear wheels.

EKanoo Racing, a major player on the American drag racing circuit is cagey about details like horsepower or turbo boost pressure, but you can guarantee it won’t be something that can be found on the brochure pages of most manufacturers. This is about as far as you can get with a car that doesn’t have a jet engine out back emitting plumes of fire. Just watch the video for yourself to see what we are saying.