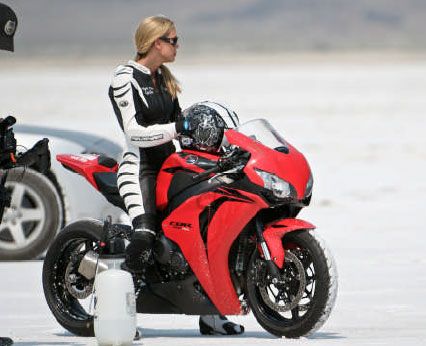 After hitting 200mph on a standard Honda Fireblade, a female racer by the name Leslie Porterfield from Dallas, Texas broke the world speed record for litre production bikes at Bonneville Salt Flats. She managed to record a two way average of 200.137mph in the FIM 1000 P-P unmodified production class thus, breaking her own previous record by 7mph. The Fireblade had no modifications of any sort. Leslies leather’s were taped up to the Blade competing under the Sir Speedy Racing banner for better aerodynamics.

Porterfield owns motorcycle dealership in Dallas and was named the ‘Guinness Book of World Records’ ‘Fastest Woman in the World on a Motorcycle’ after hitting 234.197mph on a Suzuki Hayabusa at Bonneville in 2008. Apart from this, she also holds numerous world records and is a regular at the Bonneville Speed Week.