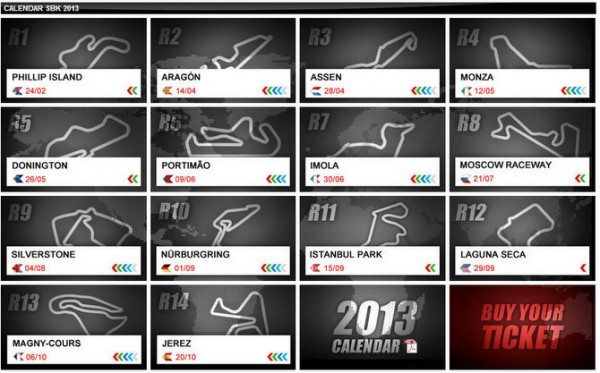 In a development that comes across as hugely disappointing and frustrating, it has emerged that the India round of the 2013 World Superbike Championship, which was to be held at the Buddh International Circuit on November 17th 2013 has been quashed. The news has been confirmed by both Jaypee Sports International and Dorna World Superbike and this means that there are no more chances of the popular two wheeler racing series coming to us this year.

Unlike earlier, when the India round was to happen in November, this year’s championships will meet its logical end at the Jerez round in Spain on October 20. The reason which has been cited by many for the cancellation of India round is that a November race would have meant that the 2014 championship would have been too close to the 2015’s. Also, custom requirements in India have always been criticized, owing to the logistic restrictions they ensue. Also, a the marshals and medical teams are yet to be trained for WSBK.

The news of 2013 World Superbike Championships India round cancellation comes soon after Formula 1 supremo, Bernie Ecclestone said that there will be no Indian Grand Prix in 2014.

Definitely not a good news for Motorsports lovers. What do you have to say on this development?