Home News VIDEO: Politician’s bodyguard in Agra winks at woman, offended, she climbs up the car, breaks it 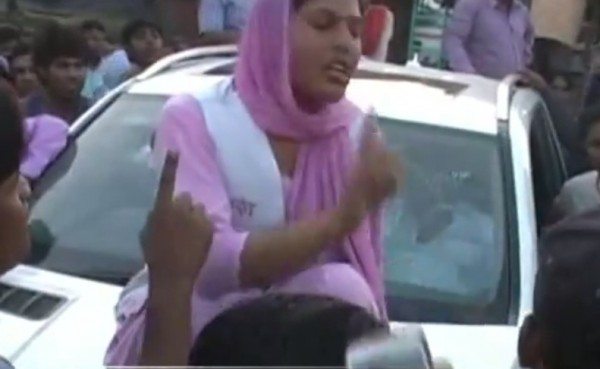 It is a city where the world comes to admire a monument which represents a man’s love, respect and admiration for a woman. But times have changed and here’s another instance that adds to the notoriety of our nation as an unsafe country for women. The security guard of an Uttar Pradesh politician allegedly winked at a young woman in Agra, but refusing to take things lying down, the woman winked back by climbing atop the politician’s Mercedes SUV in protest and attracting a huge crowd to shame the culprit in public.

Refusing to climb down until she was handed an apology, it wasn’t just the wink, but the guards even damaged her cellular phone, for which the woman rightfully demanded an amount of Rs 6,500. The politician, Abhinav Sharma, who was inside the car at the time of this incident, alleged that the courageous woman yanked a flag off his car and smashed the car’s windscreen with it. 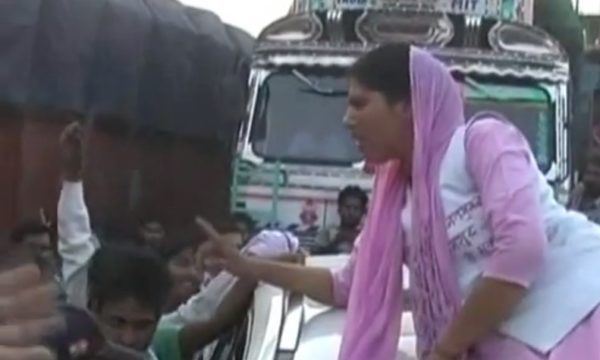 It all started when the victim and her sister were travelling on their scooter, when one of the guards winked at them. Her sister tried clicking a picture of the culprit, but the other guards snatched her phone and broke it, when the duo stopped the car to inform the occupants of the individual’s perverse behavior. The Politician later clarified that he removed the guard behind the act, but added that although he respects women, the law shouldn’t be taken in one’s own hands. For all the men reading this, let’s not give our gender a bad name by indulging in such behavior. Respect women and they’ll respect you just as much. If you see any such happenings in your vicinity, don’t just stop and stare, react and act, let this country feel proud for the kind of men who are born here.