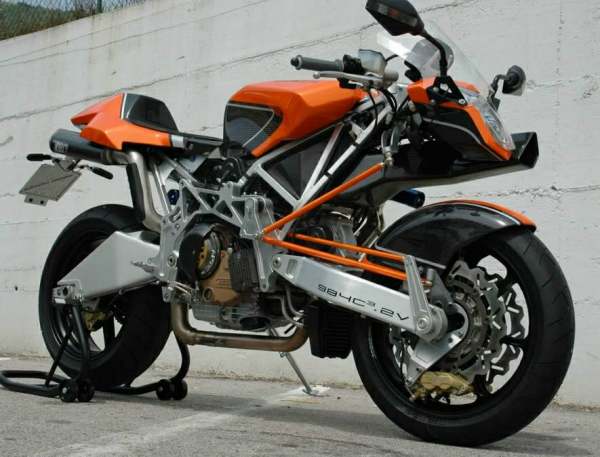 Italy’s Rimini based exotic superbike maker Vyrus is planning to launch its motorcycles in India. The company is known for the radical, futuristic styling of its bikes, and for its use of the most exclusive and lightweight materials in making its bikes, which make them some of the most expensive things on two wheels.

Vyrus is also known for its work in association with Bimota for the development of the compatriot’s “Tesi” motorcycle which featured the radical hub-centre steering system. The company later split from Bimota and developed the system independently under their own brand name. Vyrus’s 984 C3 2V and 985 C3 4V models also employ the same arrangement, making them visually two of the most sci-fi bikes in production.

The Vyrus 984 C3 2V employs a Ducati sourced 2-valve air-cooled engine which produces 90.5bhp of peak power. The 985 C3 4V is powered again by a Ducati sourced engine, – a 4 valve liquid cooled unit, good for 150bhp of peak power.
The bikes from the Italian super bike maker are known for their high-performance. The company employs a team of engineers from premium bike makers such as Ducati and Bimota.
The engineers of the company are experienced in high-class motorcycles: many of them having worked for companies like Ducati or Bimota.
Another bike from the Vyrus stable is the 987 C3 4V, though not in production by the look of it.  Touted at one point in time as the world’s fastest production bike, the 987 was supposed to be made available in three avatars, boasting 170bhp /163 kilo, 184bhp / 158 kilos, and a supercharged top end version with 211bhp /154 kilos. Not much information is available on this specific model though, on the company’s official site and otherwise.

Expect the price tag for the new bikes to start from 22-25 lakhs.