Come this year’s EICMA show in Milan, Italy, and the world will most likely witness the dawn of a new fastest, most powerful production bike. Ascanio Rodorigo, the owner of the motorcycle company – Vyrus – is in a mood to demolish the prevailing speed and power records to create history.

UK’s Motorcycle News (MCN) reports that the new bike will be christened the 987 C3 4V, and will be will be available in three variants. The base model will produce a ‘low’ 170bhp, and will weigh a ‘heavy’ 163 kilo. The second, intermediate variant with an ‘R’ badge will make 184bhp and weigh 158 kilos. The real deal is the top end variant though, which will feature a supercharger, and boast a peak power output of a crazy 211bhp. The bike will weigh in at about 154 kilos, and will lay claim on being the most powerful and the fastest bike in the world. Vyrus plan to outdo the reigning heavyweights in the ring such as the Kawasaki ZZR 1400, Yamaha Vmax and Ducati Desmosedici RR in the high-performance arena with the new machine.

Rodorigo says that even with so much power, the 987 C3 V4 will be an easy bike to ride. “Everybody will be able to ride it without killing themselves. The main drama is the light weight, not so much the power,’ Rodorigo told MCN. ‘It turns easily into corners and the stability grows the closer you get to the limit. It’s incredibly confidence building,’ he added.

Of course, the bike will be insanely expensive. The base model will be priced at a ‘reasonable’ Rs 35lakh in the UK, the R version will cost Rs 40lakh and the top of the line variant will cost close to Rs 55 lakh!

To justify the high price, the new bike will be equipped with latest in motorcycle techno gadgetry. Standard kit most likely will include high-technology electronics, with a top-of-the-line traction control system, to help riders keep the wheels glued to the tar. The Vyrus has been known the world over for its unusual front swing-arm, which it uses instead of the usual front fork. The arrangement is known to be very stable and confidrence inspiring, and will be further tuned to handle the extra power of the 987 C3. We’ll await the launch and the ride reports of the bike eagerly. 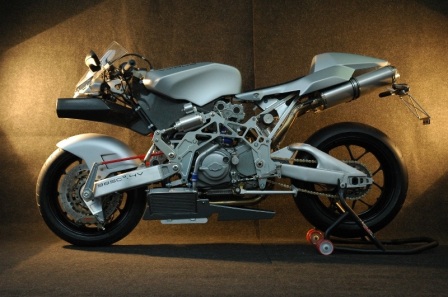