Volvo India will be launching the facelifted XC60 tomorrow. Swedish origin automaker Volvo, which is currently owned by the Chinese Geely, is known for the most safety oriented vehicular technologies. But, sadly the brand hasn’t done well in the Indian market when compared to its competitors. Volvo in India is mostly referred to large luxury buses. It may be noted that, Volvo is operating in India by bringing the vehicles via the CBU route. 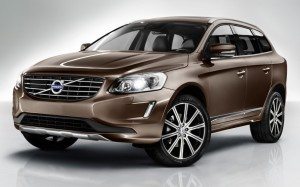 The facelifted Volvo XC60 SUV will receive  the new family look. Also, the equipment list will see a few additions. A minor mechanical update is also expected. The current models feature a rounded and dynamic family look on the XC60 SUV. This has been replaced by a visually widened front end, more prominent horizontal lines and slimmer lights. Other than a fresher front, the car also gets new OVRMs, new rear bumper, new exhaust tips and some chrome on the tailgate.

On the interior front, a new multimedia system has also been added, which includes a 7-inch touchscreen which can be used even with gloves. The TFT instrument panel from the latest V40  has been added to the revised Volvo range.The new system provides full internet access, internet radio, Google maps & search and internet music streaming. The system pairs with driver’s mobile phone for gaining internet access. Also, steering mounted paddle shifters have been added to the models.

Pricing for the new models is expected to be increased by 2 lakh INR.

Stay tuned to Motoroids for the pricing and other details of the 2014 Volvo XC60.