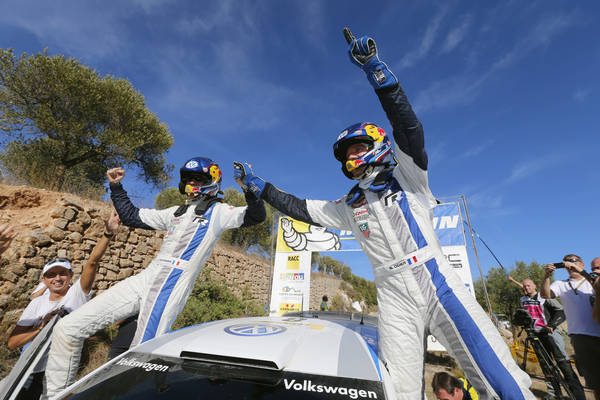 Volkswagen has won the manufacturers’ title in the FIA World Rally Championship (WRC) with an outstanding one-two victory at the Rally Spain. Sébastien Ogier/Julien Ingrassia (F/F) claimed the Drivers’ and Co-Drivers’ crown three weeks ago at the Rally France. The French duo went on to score an impressive win – their eighth this season – ahead of their team-mates Jari-Matti Latvala/Miikka Anttila (FIN/FIN) at the “Rally de España”. As a result, Volkswagen has an unassailable lead in the Manufacturers’ Championship with one round still to go this season. Winning three titles in its debut year with the Polo R WRC is Volkswagen’s greatest motorsport achievement to date.

The German team clinched all of the titles in the top category of the FIA World Rally Championship (WRC) in its debut year – the Drivers’ and Co-Drivers’ Championship and the manufacturers’ trophy. No other manufacturer has managed to win a World Championship in its first year since the World Rally Championship began. Even in the history of Formula 1, no car maker has yet taken the title in its opening season through their own efforts. Volkswagen’s performance has exceeded all expectations. Originally, it was considered to have set itself ambitious goals by aiming for podium finishes in year one, round wins in the second year and championship titles in its third year.

On its last day, the Rally Spain turned into a real showdown between the Volkswagen pairings Ogier/Ingrassia and Latvala/Anttila. Following a puncture on day two, Ogier started the final 138.54 kilometres on gravel fourth overall, with Latvala in the lead. On the third and final day, the Volkswagen duos rose to the different challenges they faced. While Jari-Matti Latvala/Miikka Anttila opened the road on the concluding gravel stages of the Rally Spain, forcing them to clean the optimum line for the cars behind them, Sébastien Ogier/Julien Ingrassia faced another problem. The new World Rally Champions* tackled the course fourth in a cloud of dust thrown up by their toughest rivals as they fought to win the round. This obviously didn’t slow down the season’s dominant duo too much: Ogier/Ingrassia put in best times on four of the six Special Stages on Sunday alone, plus two more top-three times. Only one other driver/co-driver pairing really shone on Sunday: Andreas Mikkelsen/Mikko Markkula recorded two best times in the third Polo R WRC.

Thanks to a precise reading of the pace notes, pairings like Ogier/Ingrassia were able to gain up to 20 seconds on their direct competitors in the dust, despite poor visibility. “It was really tough going for us co-drivers,” said Julien Ingrassia, Sébastien Ogier’s right-hand man.

The Rally Spain was the only round in this season’s WRC series to cover both asphalt and gravel. The Volkswagen Polo R WRC proved to be a great all-rounder in these unique conditions: 13 of 15 best stage times and 26 of 45 possible top-three times went to the World Rally Car from Wolfsburg. The all-wheel-drive triumphed seven times on the nine asphalt stages and on all six gravel sections. Since the Polo R WRC first lined up in the WRC at the Rally Monte Carlo, it has racked up 132 of the 215 possible best stage times – that’s 61.4 per cent. Sébastien Ogier has put in 101 best stage times single-handedly so far this year.

Jari-Matti Latvala, Volkswagen Polo R WRC #7 said: “I’m absolutely delighted for the team. Volkswagen more than deserved to win the World Championship title this year. The Polo R WRC is a real World Champion car. Even though we had a few technical problems at the end today, it got us over the finishing line again and we won the very first one-two victory in the WRC with the team. I would’ve liked to have fought with Sébastien Ogier for victory in the round right to the bitter end because we had a fair duel without tactical instructions until just before the finish. I’m still pleased with second place. It gives me confidence ahead of the forthcoming Rally GB in Wales, which is definitely one of my favourite rallies. I can hardly wait to tackle it.”

Sébastien Ogier, Volkswagen Polo R WRC #8 said:“What an incredible rally, and what a fantastic season! Our team really deserved the World Championship title. I’m incredibly proud to be part of the Volkswagen team. And of course I’m ecstatic that Julien and I managed to secure the win here in Spain. I promised beforehand that I would try everything – and it worked. It has to be said that it was extremely difficult early this morning though. Driving through the dust thrown up by the cars in front was like being in the thickest of fog – zero visibility. At times, we had to slow down in the middle of full-speed stretches because we couldn’t see anything at all. We made a strong comeback in France and left as World Champions. Now we’ve managed to play catch-up big style in Spain – and we’re World Champions again!”

Andreas Mikkelsen, Volkswagen Polo R WRC #9 said:“Volkswagen are World Champions! I’m so pleased for the team – they’ve just been great this season. It’s just a fantastic bunch of people. I wanted to give them something back today too and tried to perform as well as possible. I felt comfortable in the Polo R WRC right from the start this morning and adjusted to gravel really quickly. Starting so far back certainly wasn’t a disadvantage, but all that dust was. But we did a good job during the recce and I had a lot of confidence in the pace notes. Seeing your own name right at the top of the list of times twice is great, of course. On the third stage of the day, I slid off the road after a long right-hand bend that went into a sharp left-hand turn. This afternoon, I wanted to go on the attack again, but I hit something on the straight. After that, the steering wheel was wonky. Later on, the suspension got damaged too, which is why we couldn’t take part in the last Special Stage. Nevertheless, I’m not dissatisfied with the Rally Spain.”

Jost Capito, Volkswagen Motorsport Director said:“Winning all three World Championship titles in one season is simply unbelievable. Given that this is the first season we have competed in the World Rally Championship with the Polo R WRC, it is an even greater achievement. Winning the Drivers’ and Co-Drivers’ World Championship was an absolute highlight for the whole team. It was a dream come true for Sébastien Ogier and Julien Ingrassia in particular at their home event three weeks ago. But the Manufacturers’ World Championship is even more important for a car maker because it proves that it’s not just the driver who’s exceptional – the product is too.”