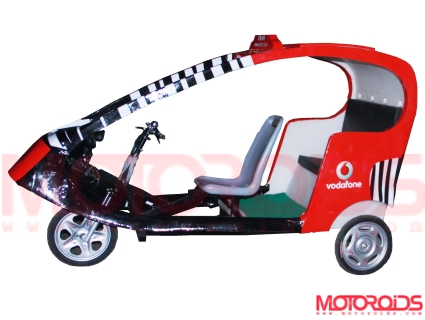 In th recent past the cell phone operators, at least in India, are churning out some really cool marketing campaigns – most of which contribute to social or environmental responsibility. Take for example the ‘save paper’ campaign from !dea or the ‘save tigers’ movement from Aircell. When animal activists raised their voice, instead of fighting back, Vodafone stopped using a Pug in their advertisements and shifted to the cool ‘ZooZoo’ campaign. So in this continued battle for remarkable presence in the market, Vodafone has now gone a step further and sponsored E-ricks (electric rickshaws) that will operate in some areas of Delhi. The e-rick, with its zero emissions, targets the reduction of the carbon footprint that petrol/diesel powered vehicles leave on the face of this planet.

The E–rick is said to be a state-of-the-art means of battery powered transportation combined with a striking, funky shape, comfortable design and advanced technical features. The vehicle’s main components are a fully recyclable polyethylene cabin, a heavy duty modular steel frame and an advanced, digitally controlled electric propulsion system. E-rick has been designed & manufactured by an experienced team of experts with backgrounds in engineering, design, business and marketing & has a range of expertise unrivalled in the field of electric vehicles as well as their parts, extras, maintenance, branding and operation. The E-rick will initially operate in the following areas of Delhi:

E-rick is all set To Paint the Town Green!

Delhi, August 10, 2010: Vodafone Essar, one of India’s leading cellular services providers, in association with Eco-Activate, today announced the launch of the much awaited eco-friendly vehicle, E-rick as the sponsoring partner. Honorable Chief Minister of Delhi; Smt. Shiela Dikshit flagged-off the E-rick at her residence.

In keeping with Vodafone’s commitment towards a cleaner and greener environment, the launch of E-rick is an effort to provide pollution-free mode of transportation in the capital. E-rick, powered by batteries, aims to ensure reduction in carbon footprint with zero emissions. This technology will reduce the dependence on conventional fuel.

To begin with, the E-rick would be available for commuters on the following routes:

Applauding the initiative, Chief Minister of Delhi, Smt. Shiela Dikshit said, “There is a need for collaborative efforts to make Delhi a pollution-free zone. We are extremely proud to lend support to E-ricks in Delhi and look forward to more and more people opting for green technologies such as this. We have always been conscious about environmental issues and hence are supportive of such initiatives which would help ensure a healthier and greener city. Not only with this ensure a green future for ourselves but also for the coming generations.”

Speaking on this occasion Sanjay Warke, Chief Executive Officer, Vodafone Essar – Delhi, said “We at Vodafone have always been environmentally conscious and have been making consistent efforts to contribute towards a greener planet. This initiative is a step forward in promoting green transportation for a cleaner and greener environment in the capital. We are extremely grateful to the government of Delhi for their support in bringing the technology to Delhi. We expect this initiative to go a long way in providing a solution to Delhi’s unremitting pollution.”

Adding to this, Mr. Ashish Jain, Managing Director & Co- Founder, Eco Activate extends his special thanks to the research project on cycle rickshaws, undertaken by the Institute of Urban Transport, Ministry of Urban Development, Government of India which has helped them shape up the project.

E-rick has been designed & manufactured by an experienced team of experts with backgrounds in engineering, design, business and marketing & has a range of expertise unrivalled in the field of electric vehicles as well as their parts, extras, maintenance, branding and operation.

Similar E-rick fleets were present at number of international events, such as the 2004 Olympic Games in Athens, the Expo 2005 in Japan, the 2006 Football World Championship in Germany and also did some very successful campaigns such as the Expo 2008 in Saragossa, Spain,  the Incredible India in Japan ( in Sep., 2008), to name only a few. Over the years, the concept of an eco-friendly vehicle like the E-rick has flourished around the world. Such vehicles have a presence in 43 countries on all 5 continents.

Vodafone Essar is the Indian subsidiary of Vodafone Group and commenced operations in 1994 when its predecessor Hutchison Telecom acquired the cellular license for Mumbai. The company now has operations across the country with over 109.06 million customers**.

The Essar Group is a diversified business corporation with a balanced portfolio of assets in the manufacturing and services sectors of Steel, Energy, Power, Communications, Shipping Ports & Logistics, and Projects. Essar employs more than 50,000 people across offices in Asia, Africa, Europe and the Americas.

Eco Activate, a subsidiary of Activate was formed with the ideologies of making conscious efforts towards a greener tomorrow. E-Rick being one of its first endeavor towards giving the future a better possibility. For more information, please visit www.erick.co.in