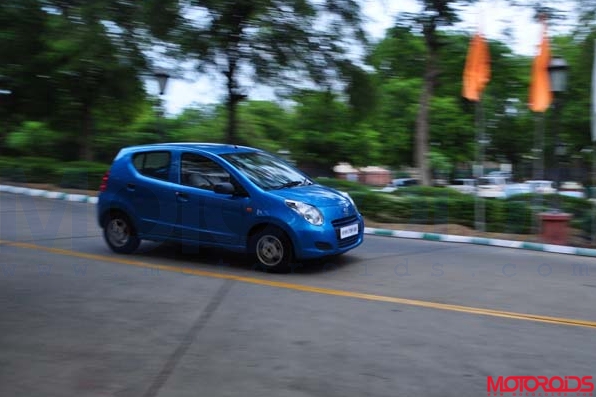 I’d be honest about it. It’s all very familiar but a tad incredible as well at the same time. Ever since we started off with Motoroids, it’s been a story about fighting the odds. We are dead and buried, resting in peace for some carmakers which used to treat us as their guests of honour at some fuzzy point in the past. It, thus, comes across as a breeze of fresh air to have been invited for a drive event, being allowed some genuine, quality time with a car and evaluating it the way it’s supposed to be. We’re getting there it seems, after a painstakingly long, arduous, yet resolute wait. This moment feels good. And I owe this moment in its entirety to the members of my team who have stood by my side, fighting all the odds along with me, refusing to give up and believing in something that most around us still don’t.  Thanks, pals!

I’m in Agra, in the backyard of the Taj Mahal, tapping the keypad of my laptop while being spread over a comfy bed in a swanky hotel. I have been driving all day long, although without having covered much distance. Maruti Suzuki A-star, the car that I have been driving all this while, has been mated with a new automatic transmission. It’s been an interesting journey experiencing first hand the aggression of drivers in this part of the world. We also managed to lose our way quite a few times in the city of Agra, while also witnessing an ambulance almost mowing down a dozen mortals. But after the hard day’s work, here I am sharing my experience of this latest offering from Maruti Suzuki with you.

First of all, let’s show to the bin to all the complaints about the backseat space of the A-star before we even start talking about this car. It’s a product which is primarily designed for the European market, and if you are not an effervescent, aware, independent young at heart being, you were never a TG. It’s a trendy product and Maruti wouldn’t car two hoots about your complaints if you are a prehistoric creature trying to fit in his five generations into a small hatch.

The A-star automatic is about the modern day urban dwellers who want a snazzy, yet economical drive, minus the harassment of having to shift with the frequency of an assembly line robot. Those who think beyond ‘kitna deti hai’ and understand the virtues of automatic transmission in city traffic, also somehow tend to value contemporary design and modern tech. The A-star automatic is targeted at such aware and alive audience who know what their priorities in life are. As we mentioned earlier, it won’t probably work for you if you look at it purely from the utility and VFM point of view. Bring it in a bit of attitude, a bit of style, and the picture gets clearer.

So, to cut a long story short, does it work for its TG? Well, the answer would be a resounding YES! Of course, it’s your conventional  four-speed automatic with the usual shift response time gremlins, but rest assured you won’t get anything better for the price in the entire world, let alone India. You want a DSG for that price? Wait for you kindergarten kids to grow up and get married.

The Auto transmission in the new A-star works very well for what it’s meant to do. Feather the throttle, understand the revs, take it easy and it will always keep you within a comfortable rev range to offer a good mix of fuel efficiency and ample torque to surge ahead with confidence. This car is meant to cut the creases on your head while driving through chaos. Now if you wish to race it with the guy in his low-slung saloon car on a highway, you are bound to be vanquished, And the fault would entirely be yours, not the car’s.

Overtaking on the highways is, indeed a hassle sometimes with automatics. You’re cruising at 80 and wish to go past a long STC bus on a two lane highway with traffic coming from the opposite direction. What do you do if the bus driver chooses to accelerate just as you proceed halfway, parallel to it? You push the accelerator pedal harder for some more juice, right? Now that’s the tricky part. In basic single clutch auto transmission systems, this would mean a time lag of one to two seconds before your experience a downshift and the resultant thrust, which may sometimes be a little too late for the wellness of your limbs if there is oncoming traffic.  The A-star however provides you an option. To aid overtaking, it allows you to flick the shifter stick to the right to slot into the third gear instantly, to get some quick response from the lower ratios. Once you overtake, you flick the shifter back into the drive mode to cruise in the usual manner. It’s a nifty tool, you just have to get used to it. The shifter also has a provision of manually shifting into 2nd gear and a Low mode for steep inclines where you need extra torque at slow speeds.

In Drive mode, the transmission does take its own time in shifting ratios, but it works very well in the city where it’ll help you potter around without hassling your left foot at all. The fuel efficiency of the car has come down from 19 of the manual t0 17 for the auto version (ARAI figues), which is a class leading figure.  It’s an excellent figure for an auto transmission car.

We managed to carry out a little performance test of the car as well during the drive. Unfortunately we didn’t have out data logging gear with us, but after multiple performance runs with manual timing – we found out that this car does a 0-100km/h sprint (110km/h on the speedo) in a little more than 23 seconds. Pedal to metal, the first gear holds on up to 40 km/h, second gear persists till 90km/h and third gear holds up to a little more than 120km/h on the speedo.

The new Alto AT will be available only in the VXi variant wherein integrated Audio, ABS, power windows (all four), driver seat height adjustment and Central Locking will be standard. You won’t have the option of air bags for the auto version.

Everything else in the car remains the same. The A-star is the same zippy, fun to drive car with great handling thanks to its wide track and a relatively stiff suspension. Much has been written about the rest of the car, and there isn’t a need to repeat the same old story.

All in all, the Alto AT is a great product which will offer a fabulous option for those who are looking for the convenience of an automatic transmission in a contemporary and stylish, yet economical car. The A-star has always been targeted at a niche, and this inclusion will definitely bolster its appeal and value.

The official prices have not been announced yet. We’ll get to know the prices on the 15th August when the car officially gets launched. And if you are a Motoroids fan, you’d know where you’ll get the prices first…stay tuned…