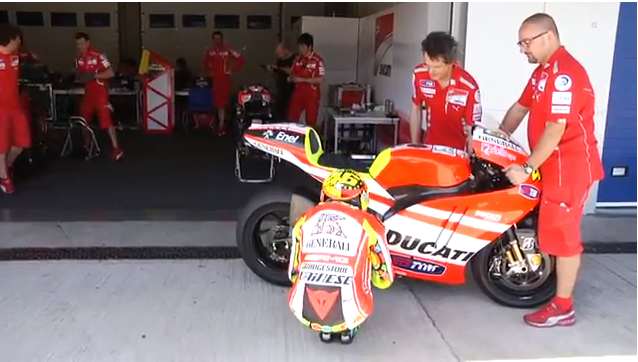 While the Ducati Desmosedici GP11 is struggling to keep up with its competitors, Valentino Rossi is already testing the GP12 version of the bike for the later part of the season and for the 2012 season. The Doctor took his first laps on  the bike at the Andalusian circuit in Jerez de la Frontera. Valentino did 50 laps on the bike.

“I’m happy,” Valentino Rossi said after the test. “I like the GP12. In my opinion, it’s more enjoyable, more fun to ride. It was the first time we had it on the track, so we had some work to do, but the engine is nicer. It’s a lot of fun, and you can do some nice slides. It’s the bike we’ll ride next year, so it was very important—and also very nice—to be among the first to take it on the track.”

“We chose to have our factory riders —today Vale, tomorrow Nicky— try the bike beginning with its first test, because we think their feedback is essential for starting us on the right path for the early development,” Filippo Preziosi said. “To be able to work with Vale for a full day is more than any technician could ask. We gathered considerable feedback that we’ll translate into further design and development for next year’s bike. The positive thing is that the technical choices made for the GP12 in the initial planning phase, in 2010—and I’m referring primarily to the engine, which is still a big-bang, and to the rear end—were endorsed by Valentino. This gives us great satisfaction, and we’re optimistic about the work that still remains to be done. We know that our competitors are also working hard and developing their 2012 bikes, but that just makes the challenge better.”

Here’s a video of the test