A few weeks ago, the first production Koenigsegg One:1 got registered in Germany and joined the Dragon Path Rally closely after. The owner of this car had a tough time registering the hypercar in Germany. The problem occured when the details which were to be entered into the database were not acceptable by the software since it accepted entries only till 999 kW. Later, the technicians had to make changes into the program to accept four digit power figures in kW. The Koenigsegg One:1 churns out 1000 kW of power which on conversion comes to 1341 HP. The One:1 has a one-to-one power to weight ratio as it weighs 1341 kg and produces 1341 horsepower.

Now, we have a video of the startup of this Swedish hypercar. When the car is fired up, the driver gives a bit of gas which bothers a Ferrari parked in the showroom so much that it fires off its alarm. A guy moves to get the keys of the Fezza and shut off the alarm. The car is carefully reversed out of the showroom. 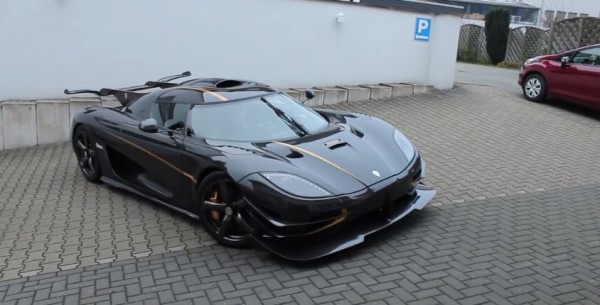 For people interested, the Koenigsegg One:1 belts out 1341 horsepower from a 5.0 litre V8. Power is channeled to the wheels by a specially developed 7-speed dual clutch which enables the hypercar to sprint to 400 kmph from standstill in a mere 20 seconds.