Sure, the new E-Pace looks spectacular. We have created an exhaustive report on the new compact crossover from England in our story here. If , however, you wish to just feast your eyes on the new car’s design, and skip the text, head over to the mega gallery of the E-Pace right here. The most spectacular thing about the new car, however, is the way it has barell-rolled its way into the Guinness Book of World records. The Jaguar Jaguar E-PACE set an official Guiness World Record title for the Furthest Barrel Roll for a Production Vehicle

In performing the stunt, the car apparently took inspiration from cinema’s most iconic car stunt and performed a 15.3 m long jump, complete with a 270 degree corkscrew-like ‘barrel roll’ to give the audience something totally unseen before. The E-PACE completed its world record jump at ExCeL in London – one of only a handful of venues in the UK big enough to accommodate the 160 m run-up and run-off vital for the 15 m leap. 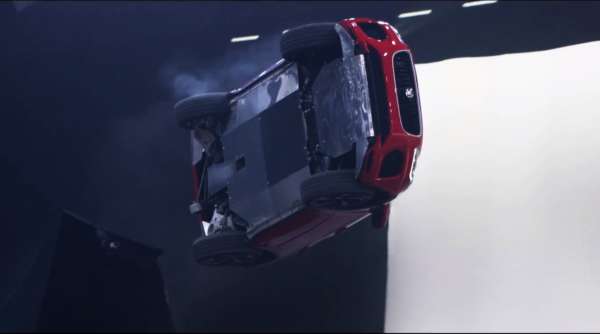 Behind the wheel was stunt driver Terry Grant, who has completed stunts on many film sets and holds an impressive 21 Guinness World Record titles.

Terry Grant, Stunt Driver, said: “As far as I am aware no production car has ever cleanly completed a bona-fide barrel roll and therefore it has always been an ambition of mine to perform one ever since I was a boy. After driving the Jaguar F-PACE in the record-breaking loop-the-loop, it has been amazing to help launch the next chapter of the PACE family in an even more dramatic dynamic feat.”

Months of testing and analysis were completed to fine-tune the stunt, including achieving precisely the correct speed of run-up. The ramps were modelled extensively using CAD before any jumps took place. Terry experienced a G-Force of 5.5 during the 270 degree twist, and required a 160 m run up to hit the air at the correct speed.

Guinness World Records adjudicator Pravin Patel said: “This amazing feat really was a sight to behold. While I’ve seen the barrel roll stunt in film, witnessing this incredible feat in real life was something pretty special. Congratulations to Terry and Jaguar for setting another epic Guinness World Records title.”

Check out the spectacular stunt in the video below