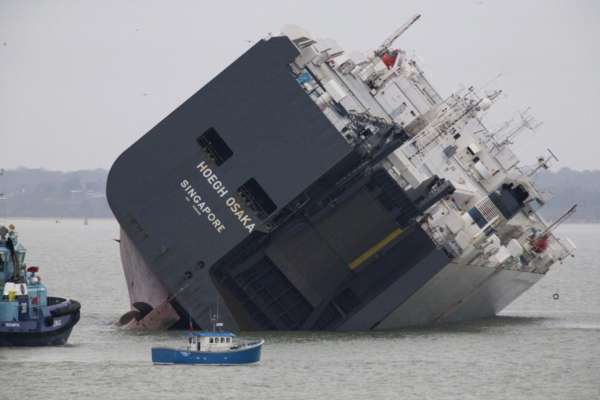 A cargo ship with over 1,200 luxury vehicles, including Jaguar, Land Rover, Mini and Rolls Royce, is stranded on a sandbank in the Solent. Ship named Hoegh Osaka is said to have deliberately run aground off the Isle of Wight after it developed problems and started to list. Reports suggest that the ship is estimated to be carrying vehicles worth over £35 million including 1,200 Jaguar Land Rovers, 65 Mini models and a Rolls Royce Wraith along with a few JCB construction equipment.

The ship has been stranded since Saturday night and it is said that it would take weeks before the contents of the ship are restored. The 25 member crew has already been rescued through an airlift.

Alex Davis, partner and head of the casualty response team at the shipping law firm Stephenson Harwood said, “Time is the enemy here; the longer the vessel is aground, the more likely she is to become further damaged and to deteriorate. They will be looking to move as fast as is technically possible.”

Here is an video of the tilted ship shot from a drone:

Here is another video that shows a close up footage of the stranded ship: