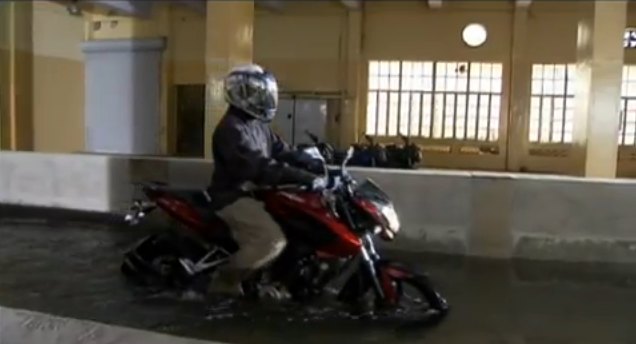 A few weeks back we showed you a video of the KTM 200 Duke wading through knee deep water without a problem. Now Bajaj Auto have released a video of the Pulsar 200NS taking a similar test and passing it with flying colors. The test includes filling a long trough with 16.5 inch deep water and conducting 4 different tests to make sure that the bike can ride through flooded areas without a problem. Test 1 includes wading through water at 15km/h. The second test includes idling the bike in water for a while. Third test involves turning the bike off in the middle of the water, starting it again and riding out. Finally to prove that the 200NS is capable to brave even the most vicious floods, the bike is turned off and made to stand in water for 30 minutes. As seen in the video, the 200NS passes all tests convincingly.