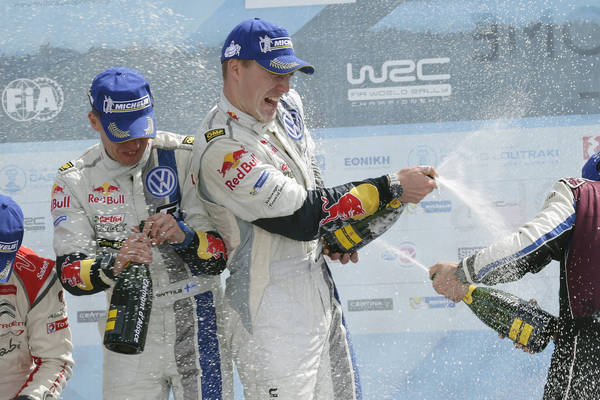 Jari-Matti Latvala and Miikka Anttila won the Acropolis Rally in Greece in the Polo R WRC. Volkswagen’s fourth win this season in the sixth round of the FIA World Rally Championship (WRC) marked the duo’s first triumph for Volkswagen. Two other points finishes gave the factory team from Wolfsburg further reason to celebrate: Andreas Mikkelsen/Mikko Markkula (N/FIN) claimed fourth place with an impressive final spurt – in just their third event as the crew of a Polo R WRC. Meanwhile, Sébastien Ogier/Julien Ingrassia defended their lead in the WRC Drivers’ and Co-Drivers’ Championship by coming from behind to snatch tenth place. On top of all that, Volkswagen is still leading in the Manufacturer’s Championship.

The Rally Greece is considered the ultimate acid test in the World Rally Championship. Thick dust, soaring temperatures, no end of coarse gravel and melon-sized rocks all put the three Volkswagen Polo R WRCs and the Volkswagen crews to the test. Although this season’s Rally Greece was shorter than in previous years, it remained just as punishing from start to finish for the cars in 2013. Deep grooves in soft sand alternated with rougher sections. Given the difficult conditions, the drivers’ starting positions on the three days of rallying played a crucial role in determining their chances.

It started out as a small problem but it had a big impact: on the very first day, fuel pressure issues cost Sébastien Ogier/Julien Ingrassia their chance of securing another top finish. A cable connection came loose, interrupting the supply of power to the fuel pump. The Volkswagen team replaced the wiring loom in the Polo R WRC #8 just to be on the safe side. Having achieved five podium finishes in the first five rallies – including three wins – this setback in the very first stage of the “Acropolis” earned the pairing a ten-minute time penalty. Sébastien Ogier restarted under the Rally 2 regulations and fought his way into tenth place in the Special Stages on Saturday and Sunday, thereby winning one point for the overall standings in the Drivers’ Championship. Ogier also managed to secure three points by achieving the best time in the so-called Power Stage – when additional points are awarded for first, second and third – despite being at a disadvantage because he had to open the route. With this performance, Ogier defended his lead in the WRC. Now, almost halfway through the season, he is 52 points ahead of his team-mate Jari-Matti Latvala, who edged up to second position by winning in Greece.

Andreas Mikkelsen/Mikko Markkula (N/FIN) also contributed towards Volkswagen’s success at the Rally Greece. Fourth place overall is not just Mikkelsen’s biggest success in his career to date, it is also indicative of a new level of maturity. The “Acropolis” was only Mikkelsen’s third rally behind the wheel of the Polo R WRC. From tyre damage and brake problems to SS best times and playing catch-up – the Rally Greece proved a real emotional roller coaster for Andreas Mikkelsen and Mikko Markkula. The highlight came right at the end for the Norwegian/Finnish duo. After having to pay tribute to the toughness of the “Acropolis” on Saturday – an air hose came loose and punched through a brake pipe on the front right-hand side of the car, then a puncture cost them more valuable time – Volkswagen’s junior driver could do no wrong on Sunday. With three best times in the Special Stages – his first solo in the WRC – Mikkelsen fought his way from fifth place to fourth and bagged an extra point in the final Power Stage. Mikkelsen secured his place in the WRC record books at the Rally Germany back in 2008 at the same time as record-breaking World Champion Sébastien Loeb and Petter Solberg (SS 19, “Circus Maximus”) when he became the youngest driver ever to win a Special Stage.

Jari-Matti Latvala, Volkswagen Polo R WRC #7- “I’m absolutely thrilled and I’d like to dedicate this win to the whole Volkswagen team. The new season got off to a very difficult start for me, but the team always believed in me and supported me really well. I’m delighted to see so many happy faces now. Winning the Rally Acropolis also means a lot to me because it’s extremely tough and it’s a real classic. Ever since I entered the event for the first time here at the age of 18, I’ve dreamed of winning it one day. The last stage felt like the longest and hardest for a some time – I felt every single stone and jolt in the car and couldn’t wait for the finishing line to come into sight. Today is a day for celebrating!”

Sébastien Ogier, Volkswagen Polo R WRC #8- “Tenth place and points for coming first in the Power Stage – that was the best we could do this time. Of course it’s frustrating to feel that both you and the car have what it takes for a podium finish, but a minor technical glitch with the power supply to the fuel pump thwarted us in the very first Special Stage. From that point on, it was all about maintaining a high speed, making it across the finishing line every day and being in the right place when our rivals were struggling. We defended our lead in the overall competition – now we have to look ahead to the coming rallies when we want to be back at the front of the pack again.”

Andreas Mikkelsen, Volkswagen Polo R WRC #9- “What an incredible rally and what an incredible final day. Everything went in our favour today after yesterday’s difficulties. We got into a good rhythm and tried to put pressure on Nasser Al-Attiyah in fourth place. And it worked. I had caught up and even got just ahead of Nasser by the end of the first run through the stages this morning. The fact that we also scored no less than three best times in the Special Stages was the icing on the cake, of course. On balance, we’re satisfied with the outcome of the Rally Greece and our performance. It’s the best WRC result of my career, so I’m really pleased. And it’s thanks to my mechanics, who did outstanding work yesterday. All of that whets my appetite for more – I can’t wait for the next rally in Sardinia.”

Jost Capito, Volkswagen Motorsport Director- “Winning the Rally Greece is a success for the whole team. Jari-Matti Latvala put in an absolutely perfect performance and really earned this win with patience and calculated risk-taking at the right time. The fact that a puncture would have made the difference between a win and a medal-less fourth shows just how much credit is due for this performance. Three different manufacturers on the podium is evidence that the World Rally Championship is a very close-run thing. That’s why I’m proud of the whole team and absolutely delighted for Jari-Matti. I was also very impressed by Andreas Mikkelsen here in Greece – he overcame all the difficulties he faced and took fourth place at the end with an unstoppable final spurt. Sébastien Ogier also deserves a great deal of respect for his performance – despite technical difficulties on day one, he made the best of the situation and ultimately collected valuable points for both WRC championships. Following on from this great performance across the board, I’m already looking forward to the Rally Italy in Sardinia in three weeks’ time.”