Sebastian Vettel dominated Suzuka with the fastest times in Q1, Q2 and Q3 to claim pole position at the Japanese GP. Jarno Trulli joins him on the front row with Lewis Hamilton put his McLaren in the third spot. 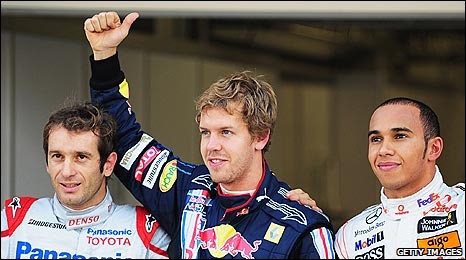 However, the qualifying at Suzuka was unlike any other. Never have I seen so many cars crash into the barriers in a single qualifying session. Maybe it was because of the fact that Suzuka hasn’t been a part of the F1 circus for the last 2 years and most of the new-comers had little or no experience of racing on the track. To compound matters even further Friday practice sessions were a total washout thanks to heavy rains which meant that none of the drivers had a chance to really find the limit of their cars. Suzuka being built in the 1960s is a very old track and hence there aren’t enough run-off areas around the track. The first victim to be claimed today was Mark Webber who crashed in the Saturday Practice and never even made it to qualifying.

Q1 went pretty routine, with Fisichella failing to make the cut in the Ferrari. Q2 was just underway when Jaime Alguersuari’s Toro Rosso had a huge impact and the session was red flagged. The session had just been restarted when Timo Glock, who was trying to match team-mate Trulli’s Toyota, slammed into the Barriers at the last corner. The session was again red-flagged. After the restart, the remainder of Q2 turned into a race to get in a banker lap. Buemi made it to Q3 in his Toro Rosso, but went sideways into the barriers on the subsequent lap and continued to run on the track shedding debris all over it, in order to make it quickly into the pit lane. This caused a minor upheaval in the order as Alonso and Kubica couldn’t get their laps in and were relegated.

Adrian Sutil showed good pace and made it to Q3 where he eventually put his Force India in 4th position, alongside Hamilton on the second row. But then lightning struck thrice! Kovalainen lost control of his McLaren and had a minor shunt causing the session to be halted yet again. When Q3 was restarted, there was time left to do only 1 or 2 hot laps and Vettel, yet again emerged the fastest. The Brawns ended up disappointed with Barrichello in 5th and Jenson in 7th place. Kimi Raikkonen seemed to have erred on strategy yet again when he chose to run the harder compound tyre in Q3.

Judging by his pace today, there seems to be a good chance that he will run off into the distance tomorrow. Only one man can stop him and that is Lewis Hamilton. Starting on the second row and on the cleaner side of the track, he might put his KERS to good use down the long first straight, and thanks again to KERS might even be able to hold off Vettel atleast upto the first round of pit-stops.