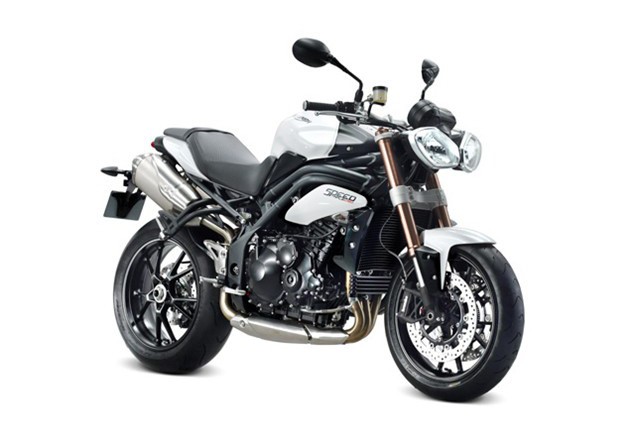 British brand Triumph, has unveiled the updated Speed Triple naked, at the 2010 Intermot Show in Cologne. The new 2011 Speed Triple comes with a revised chassis featuring a twin- tube over engine design and is powered by a 1050cc three- cylinder engine, which is capable of delivering 111Nm of max torque at 7500rpm and a max power of 128hp at 9250rpm. The bike has been made lighter by 3kgs and the current wet weight stands at 214kgs.

The new Speed Triple also gets a revised Showa suspension with an adjustable 43mm upside down Showa fork up front and an adjustable monoshock at the rear. Braking power is gained by Brembo brakes at the front and Nissin at the rear. The round headlights installed in the previous model has been replaced with an angular twin headlights to give an aggressive look. The new headlights also holds the tachometer and speedo instrument console, which are now delivering more instrumentation options including a lap timer and programmable shift light.

Colour options available for the 2011 Triumph Speed Triple will be available in Phantom Black, Crystal White and Diablo Red and for the first time ever, with ABS. Pricing details are yet to be revealed.

Watch the video below…