Khardungla – the mecca of motorcycle enthusiasts not only in our country, but all over the world, has been the favourite destination for bike riders and enthusiasts. Every now and then, when the conditions around this region are favourable for riding, flocks of riders go to this destination on their two-wheeled partners. While the range of bikes from Royal Enfield has been considered to be the bike of choice for all motorists who plan to conquer what was once the world’s highest motorable road, nowadays we also see people take their expensive machinery for various personal reasons. They even took a Formula 1 car up there and some Italian exotica has been there too. Talking about the latter, someone has now taken a track-ready and rare MV Agusta F4 RC to a place the bike itself would’ve never imagined in its craziest dreams.

The final leg of KHARDUNGLA, after no roads i so badly suffered with my neck , back , shoulders , wrist , because it was purely off roading for more than 30kms uphill , altitude varies and it was freezing to -4 degrees where i cant feel my hand and throttle , meanwhile air is too thin so the bike suffers to move with the clutch ,but I challenged myself to do it single handedly , stopped at few places for my own motivation and calmness and finally that relief when u reach the top step its totally worth it 🏍✌🏻 . . . . #vr46 #k2k #mvagusta #f4rc #repartocorse #khardungla #nature #leh #ladakh #amg #ferrari #dainese #dainesecrew #agv #agvhelmets #travel #traveldiaries #travelphotography #adventure #peace #ride #biker #bikelife #bikeporn #ice #snow #roadtrip #offroad

A die-hard Valentino Rossi fan, Harish Kumar uploaded this short video of him completing the final leg of this journey on Instagram. One can only imagine the hardships he had to endure to accomplish this feat. Apart from the cold temperatures, of around -4 degrees centigrade, the committed riding position of the bike makes it very difficult to ride on the road, for such extended periods of time. Moreover, the thin air of the mountains would have made it difficult for the bike to operate as well. Despite these challenges, the man and machine both triumphed at the end. 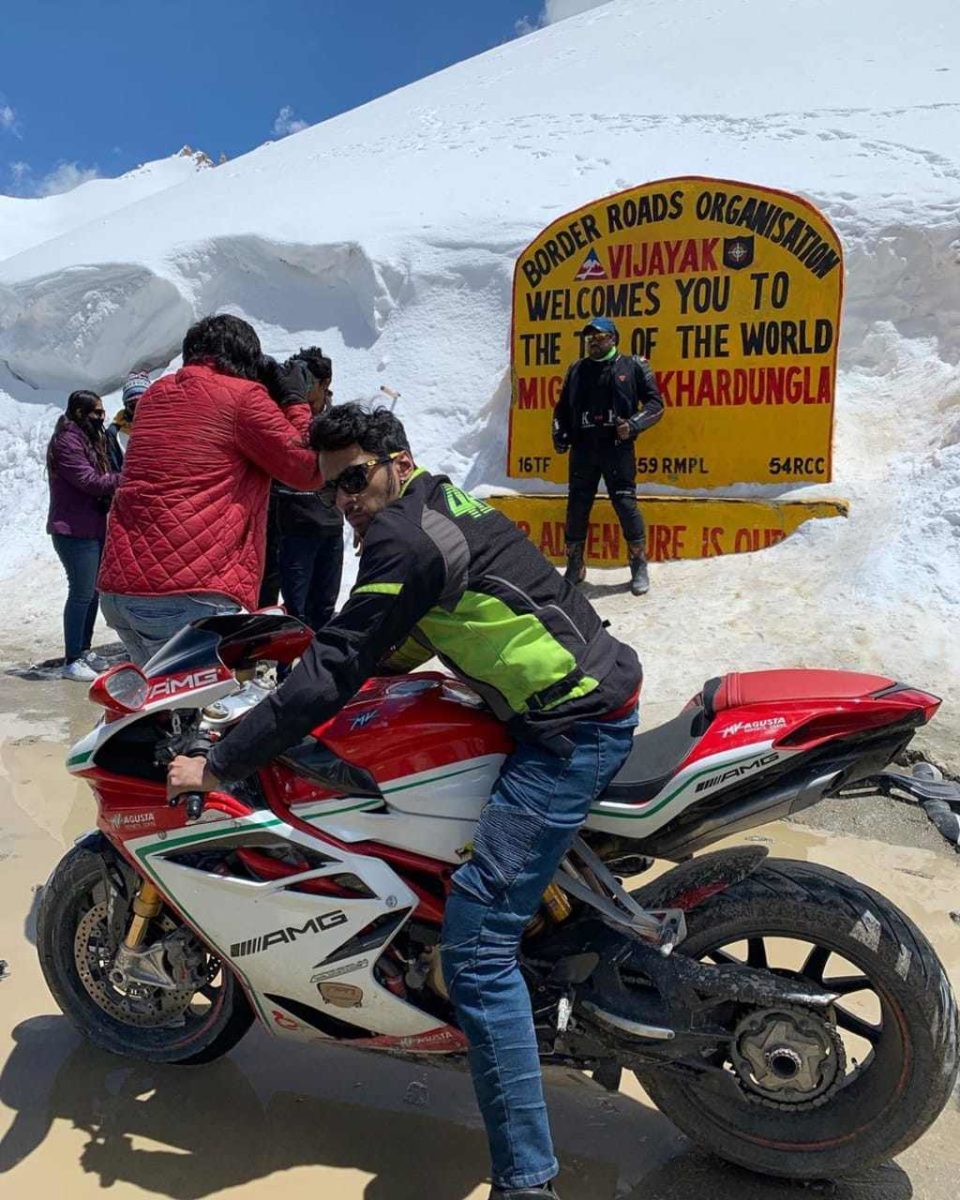 Limited to just 250 units all over the world, this F4 RC is one of the very few, if not the only one which made it to Indian shores. Powering this beast of a motorcycle is a 998 cc four-cylinder engine that produces 205 hp of power at 13,450 rpm (212 hp on the kit version with the exhaust system and ECU) and 115 Nm of torque at 9300 rpm. The exhaust system and the ECU comes with the bike, delivered in a box made of carbon fibre along with a number other goodies including quick-release tank cap, red anodized Ergal plugs to be applied after removal of rearview mirrors and certification demonstrating that each motorcycle belongs to a limited edition of just 250 units. Linked below is a video of us where we spent some time with this lovely motorcycle, do have a look.