EICMA motorcycle show will witness some interesting products and we expect to see new models from Indian manufacturers like Royal Enfield and Hero MotoCorp. We may see a bigger displacement thumper arriving at the motor show which will come equipped with the new, parallel twin engine that was announced recently.

Hero MotoCorp has once again teased its upcoming off-road motorcycle ahead of its EICMA debut. While the upcoming product is hidden behind the text yet again, this time around, we can clearly figure the larger front wheel and the tall set front fender. The ergonomics appear to be quite comfortable too with an upright riding position. We can also see a small windscreen through the text in the teaser image too. 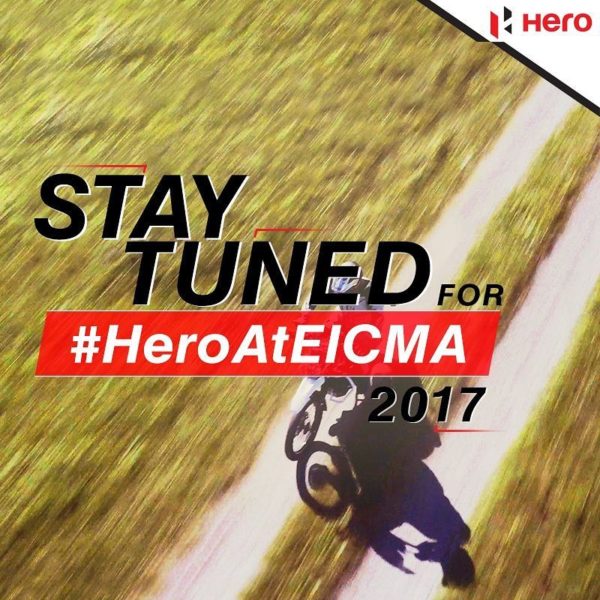 “Milan is ready for the big reveal. And so are we. Are you? One more day to go. #HeroAtEICMA,” wrote Hero MotoCorp in its Instagram post.

Milan is ready for the big reveal. And so are we. Are you? One more day to go. #HeroAtEICMA

Earlier rumours suggested that the Hero MotoCorp will introduce a higher displacement Impulse which will be available with two engine options – 200cc and 250cc – but we never heard any further details. The report also suggests that the bigger Impulse will share its engine with the yet-to-arrive HX250 and will come equipped with Hero’s C-ABS safety net and two riding mode options to select from – City and Sport.

The 2017 EICMA motorcycle show is merely hours away from beginning and we’ll soon witness the arrival of the new product. Stay tuned!