The good chaps at WCF have spied the upcoming 2015 Jaguar XJ facelift once again. The car was wearing less camouflage, with only the front and rear hidden. Still, the camouflage isn’t enough to hide the changes from the pyring eyes in the automotive world, better known as spy photographers. The car was caught while it was undergoing testing on wet roads. 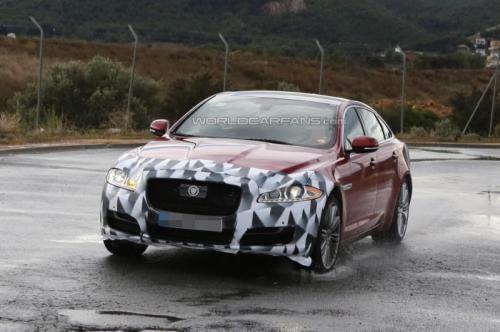 These latest spy photos provide us a clear view of the British carmakers flagship luxury sedan.  The refreshed Jaguar XJ will sport a redesigned front bumper. At the rear side, the tail lights and the bumper will undergo minor changes. Jaguar had recently introduced the 2014 XJ, so this model is reportedly expected to roll out towards the end of next year. 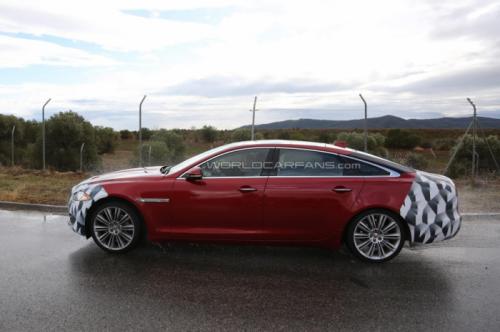 The 2015 Jaguar XJ will be powered by the same engines which do the duty in the current XJ variants. The engine options include the 5.0 liter supercharged V8 mill, for the sporty Jaguar XJ-R. This engine produces 550 HP of max power and a torque figure of 680 NM. This V8 motor is mated to a ZF-sourced 8 speed auto transmission. This prancing cat hits the ton in just 4.4 seconds from standstill, and will keep accelerating to its electronically limited top speed of 280 kmph. 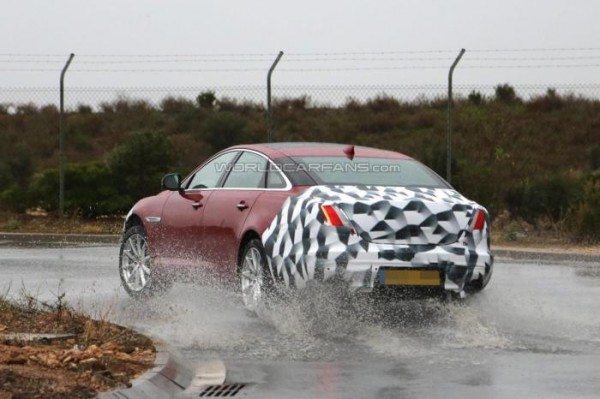 Other engines on offer will be the 3.o liter supercharged V6, which produces a max power output of 340 HP. The Jaguar XJ is also offered in the long wheelbase version and some optional rear seating configurations which provide a premium feel akin to business class cabin in an airline.

Stay tuned to Motoroids for more dope on the upcoming Jaguar XJ Facelift.