It has by now become well known that the Korean carmaker giant Hyundai is close to unveiling the Elantra/Avante facelift. We have also come to know that the Hyundai Elantra facelift 2014 will be launched in South Korean car market on August 24 and we expect the car to be here by the end of this year. We have already seen many spy shots of the upcoming Elantra facelift and we have a fair idea of what the car would look like. 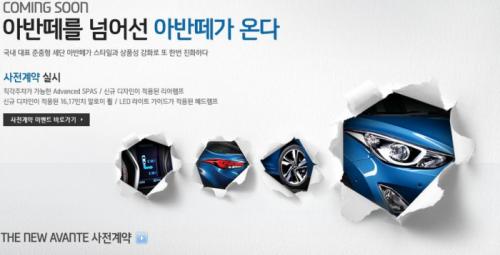 Now, Hyundai has released a couple of teaser images of the upcoming model. We are still busy trying to translate Korean but from what we have managed to understand, the Elantra facelift will come with a revised front fascia that will consist of a new front bumper, new foglamps and re-profiled headlamps. The updated car will also come with a new set of alloy wheels and a new design motif for the taillamps. The interiors too are likely to get minor updates, with some more hi-tech displays and gizmos.

We have always felt that the latest gen Elantra is one of the best looking sedans to have ever come from Hyundai and the car has got plenty of rave reviews for its design. The Elantra, which is also sold as the Avante in many markets, has been a bestseller, both in US and Indian markets. We feel that the facelift should be a step in right direction to preserve the freshness of the car.

Stay tuned to Motoroids for more updates on the upcoming 2013 Hyundai Elantra facelift.