Home BMW Is this the upcoming 2014 BMW M4 Convertible

Seen  below is an ‘alleged official image’ of the upcoming 2014 BMW M4 Convertible. The pic was posted by Autoblog.nl, who claim that this image has been taken from a German brochure. 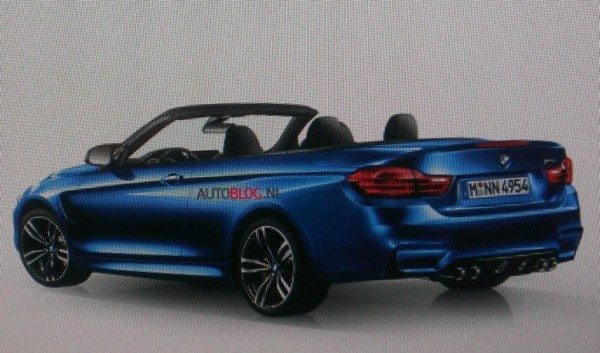 The BMW M4 has been codenamed as F82 and will be the successor to the now discontinued BMW M3 Coupe and Convertible. The M4 will be based on the recently unveiled 4 Series of cars. It may be noted that the BMW 4 Series is in line with BMW’s plans to plug in all the gaps in its current lineup of cars by offering new body variants of the existing cars with more features and at a higher price. The new nomenclature has been done in such a way that all the 4 door sedans get odd numbered series names and the Gran Coupe/ Coupe/ Cabriolet models get even numbered series names.

The M4 should hit the dealerships in late-2014/early-2015, a year after the all new M3 sedan breaks cover. Powering the M4 will be the same inline six-cylinder motor that will be seen powering the upcoming M3 sedan. With this, the 4.0 liter V8 will be completely discontinued. However, nothing else could be confirmed about the new motor. Our guess is that the power plant will be a 450 bhp 3.0 liter twin-turbo affair.

Stay tuned to Motoroids to know more about the upcoming 2015 BMW M4.