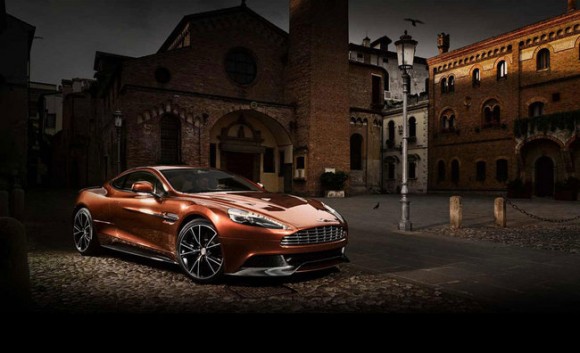 I absolutely love the way Aston Martins look. The aesthetics of these cars ooze of finesse, controlled aggression and richness. Now, just in case you thought that the DBS is getting too long in the tooth and has got a tad boring, Aston Martin has launched the 2013 Vanquish in India. The 2013 edition is a thoroughly revisited version of the earlier Vanquish.

The new Vanquish has been extracted from the AM 310 concept that we saw at the 2012 Concorso d’Eleganza Villa d’Este, Italy. Powering the new Brit sportscar is a re-tuned version of the 6.0-litre V-12 engine that debuted in the 2003 DB9. The motor pumps out 565 horses and churns out 620 Nm of torque. All this force is transmitted to the rear wheels by the ‘Touchtronic 2’ 6-speed automatic gearbox.

Anchoring duty is courtesy carbon-ceramic brakes. The car’s suspension has three settings: Normal, Sport and Track. The tasty 20” wheels come shod with 255/35 Pirelli P Zero rubber. AM claims that the new car is capable of dismissing the ton in just 4.1 seconds and has a top whack of 292 km/h. The car, whose body panels are made up of carbon fibre, tips the scales at 1645.5 kgs.

The car is comes with a stratospheric price tago of INR 3.85 crores . We just hope that all the wannebe Mr.Bonds won’t end up scratching their new toy.