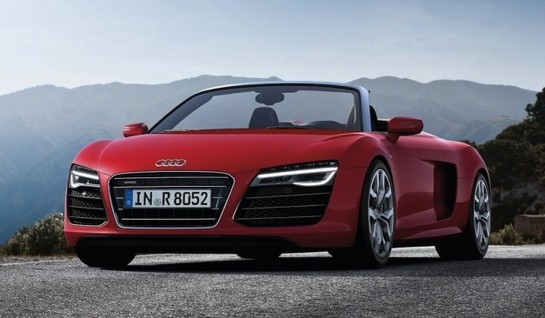 Regulars here might remember that we posted a fair bit when it first emerged that popular German car maker Audi had planned a few changes for the very popular A8 supercar. Now,  Audi has revealed the 2013 R8 line-up.

The supercar line up gets a new flagship variant in the guise of R8 V10 Plus. The V10 Plus shares carbon-fibre reinforced plastics with the R8 GT. Powering the car is a re-tuned 5.2-liter V10 that pumps out 550 HP of power and 540 Nm of torque.

On the outside, the car gets styling revisions at the lights, bumpers, grille and diffuser. The tail pipes are now circular in shape. However, the nature of changes is such that only the purists would be able to spot the difference between the current and upcoming editions of the car.

The 2013 Audi R8 should hit the showrooms by the end of this year and expect minor hike in the pricelist.