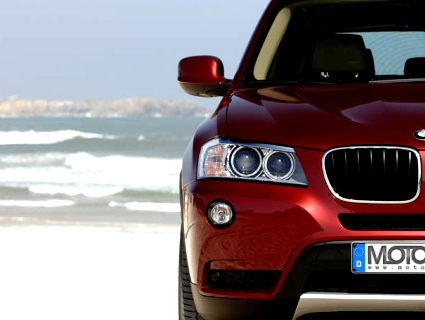 BMW has officially unveiled the 2011 X3 (F25) and you guessed it right – it doesn’t look alarmingly new as compared to its outgoing sibling! To the eagled eyed enthusiast though, the new BMW X3 will look longer (3.36-inches), wider (1.1-inches) and taller (0.5-inches) than the current model. Like the new 5er and 7er, the X3’s kidney grille gets a more upright stance. The side profile of the Sports Activity Vehicle (SAV) gets a pronounced shoulder line which runs into the new LED taillights that BMW had teased a couple of months back. The D-pillar and the signature ‘Hofmiester Kink’ are up-swept in the new model. This lifestyle soft-roader gets new interiors as well. It gets all the new bits that are now common in the current generation Beemers – from the 8.8-inch iDrive controlled screen to the new joystick-style transmission lever.

The F25 X3 will incorporate the new ‘Performance Control feature’ and will come with BMW’s naturally aspirated 3.0-litre, 240hp inline six cylinder engine at the base level and a 3.5-litre, 300hp turbocharged N55 inline six cylinder engine at the top end. Christened as the xDrive28i and xDrive35i respectively, both these models are expected to hit the Indian shores by the first quarter of 2011. There are reports that BMW is localising some of the components used in its cars in India. Since the X3 F25 is based on the new 3-series, we expect some of the localised components going into the SAV as well. Hence we expect the cost of the 2011 X3 F25 to be a tad lower than the current, outgoing model. Head over to the next page for the high, wallpaper resolution image gallery and Press Release of the new 2011 BMW X3 (F25) >>>