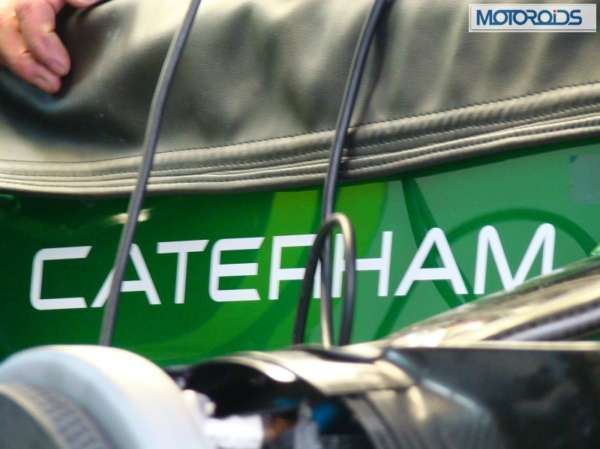 We got a chance to see F1 Pit up and close. Let us start with the real purpose of our visit –

GE is a major partner and sponsor of Caterham F1 team. Now what could a GE company which makes CT Scan machines and large wind turbines do in an F1 car? GE also has expertise in several other fields of science and engineering. One such science we all love is the Science of F1. Since 2011, GE Global Research (GE’s central technology development arm) is associated in Caterham Formula 1 team in Big Data Analytics, fiber optic sensing, composite manufacturing, heat management and advanced aerodynamics.

Big Data Analytics: An F1 Car produces tremendous amount of data – single race produces about 20GB of data. That’s about couple of seasons of your favorite sitcom. However, this data is not funny like the sitcoms. This is serious data and requires highly technical analytics to improve performance in race. There are about 150 sensors in each car and the data from them is combined with information generated during the development cycle and testing. The team’s effort to track and analyze this much amount of data is reduced from hours to minutes.

Advanced Aerodynamics: GE’s experience from aviation business comes in handy over here. So the same technology which makes the airplanes air bound, keeps a car at 300 kmps glued to the road. By analyzing the results of sensors mounted in the front wing of the car, GE can make improvements in the design to increase down force and reduce drag.

Heat Management: Starting in 2014, the engine size has been capped to 1.6 litre but to make those engines produce power in excess of 700horse power, there will be turbo chargers and to improve their efficiency, GE is designing inter coolers to achieve that feat. Imagine an engine found under the hood of a SX4 producing the power of a Koenigsegg. 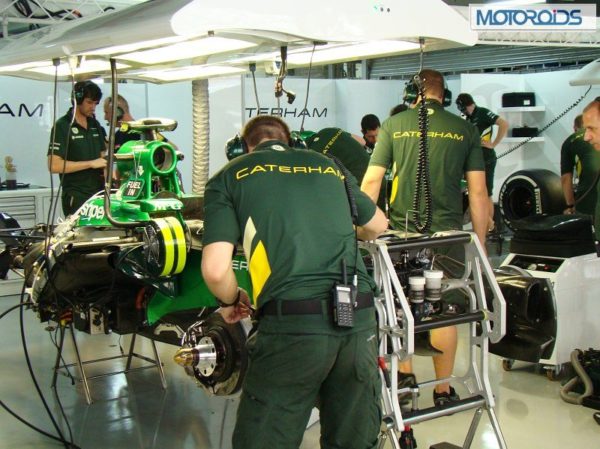 We were invited by GE Caterham F1 team to visit their paddock and pit area a to witness what goes behind all the glamour and 300 kmph speeds. The tour was lead by Caterham F1 Team representative, Quentin Warren. We were first shown the steering wheel from 2011 car. It had 12 buttons and 9 rotary selector switches each with multiple selections. They even have a button to deliver water to the driver during race time from the hydration pack. Yes, we asked them if we can have a steering wheel and yes, we can configure the button to deliver beer. But we neither had $60,000 to buy it nor to we support drunk driving.

We then saw the famous Pirelli tyres. When filled, a typical tyre weighs about 13 kgs. Though larger, it felt lighter than my own cars tyre. Next we went to the pit area. They were building the car and testing the engine. Each of the two cars has 5 dedicated engineers working on them and there are 5 common engineers including the Chief Engineer. They started the engine during testing and the sound shook out ear drums.

Behind the scenes included a spare parts incharge responsible for more than 120,000 spare parts, a guy who was looking at telemetric data and was analyzing them. They say financial experts are best at making graphs and making conclusions, but I can bet that analyzing this data would make most financial experts sweat to death. Moving on, we saw nicely stacked helmets for the pit crew, organised headphone sets engines, gear boxes and basically everything which goes into a $10 million car. Unfortunately we do not have photographs from inside the garage as photography was prohibited.

We then met with Heikki Kovalainen – test driver for the team. Though the test driver, he is the most experience driver in the team having raced with legends like Alonso and Fisichella. When asked about the BIC, he said he likes the track very much and that it has some interesting corners.

We then bid good bye to the team. It was a day well spent.