Tyre manufactures have hiked prices of tyres for all types of vehicles by around 2 to 4% since 1st October. The price hike decision has been taken owing to an increase in the price of rubber by around 50% since the past 5-6 months. Out Of all the raw materials used,natural and synthetic rubber account for over 50% of a tyre’s manufacturing cost. The prices of carbon black and nylon cords have also increased over the past few months. A.S.Mehta, Director (Marketing),JK Tyre & Industries, said that the company has increased tyre prices by 2 to 4%  owing to a rise in input costs. The price of its heavy commercial vehicle tyres have been increased by 2% while for light vehicles it has been increased by around 3-4% and for other vehicles by around 2-3%. 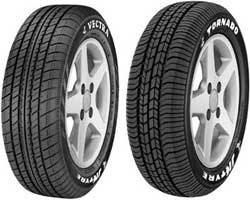 Paras Chowdhary, Managing Director, Ceat Limited also confirmed that the company has increased its two and three wheeler tyre prices by 2-3%. He further revealed that the prices of heavy commercial vehicles tyres will be raised by 2-4% in the thied week of this month. Apollo Tyres have so far not jumped onto the price hike bandwagon.Neeraj Kanwar, Managing Director, Apollo Tyres, has said that the company has so far been absorbing the higher costs. He commented that the company was assessing the situation on a day-to-day basis and if a price hike decision is taken, it will be done gradually. According to Rajiv Budhraaj, Director General, Automotive Tyre Manufacturers Association, imports are also not a viable option as as the difference between local prices and imported prices have decreased to Rs.2-3 per kg from Rs.18-20 earlier.