Home News TVS teases the face of its all new, 2013 Apache! 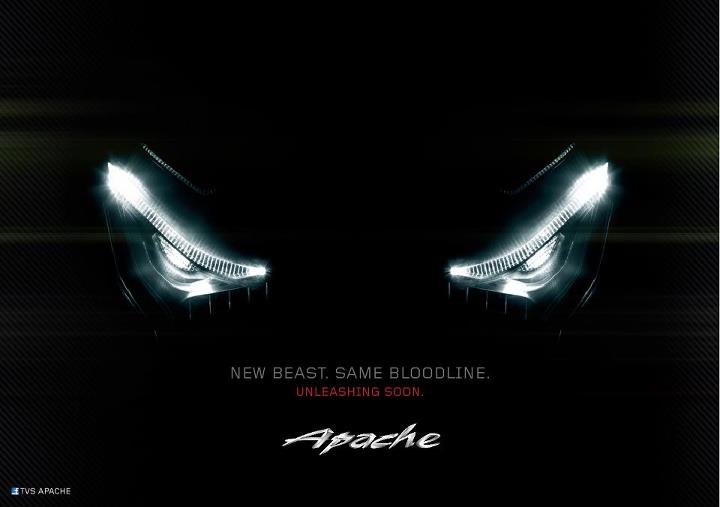 Auto enthusiasts have always looked up to TVS for powerful and innovative products. This was the company that gave us the indestructible Fiero, and then presented us a genuine track tool in the Apache. The promise has always been there, but for some reason, the Hosur based bike maker hasn’t quite been able to set the imagination of bike enthusiasts on fire like Bajaj managed to do with its Pulsar line of bikes. Of late, the emergence of 200cc plus bikes in the Indian market, along with democratization of technologies such as liquid cooling and perimeter frame has pushed the TVS Apache even further back on the performance enthusiasts’ options list. High time the company came up with some fireworks, especially with its flagship Apache.

Seems like the company has something exciting up its sleeve. TVS has teased an image of its new Apache on its Facebook page. The image, showing a faired front headlamp introduces us to the sinister new face of the Apache. Going by the first look, we have a good reason to believe that the new bike won’t just be a cosmetic makeover, but will have some serious running gear as well . A 250cc liquid cooled engine is the need of the hour, and we can only hope that TVS is ready with such a unit to be fastened within the Apache’s frame. We’d honestly be disappointed if the new bike is propelled by the same 180cc mill that poweres the current gen Apache. TVS has been selling liquid cooled underbones in the Indonesian market for long now, and developing a LC 250 engine shouldn’t be that big a deal for the bike maker. We have heard murmurs about a 400cc twin bring under development at the company’s R&D center for quite some time now, though it would be really optimistic to expect such an explosive engine so early.

The Pulsar 200NS launch is just round the corner. The timing of this teaser has been spot on. It would make the prospective buyers of the 200NS stop and think. If TVS indeed have something to match the power, styling and technology of the new Pulsar, then we’re in for a fantastic showdown between the two rivals. Stay tuned, as we try and gather more info about the new bike. In the meantime, if you have some information about the new product, do share it with us via your comments.