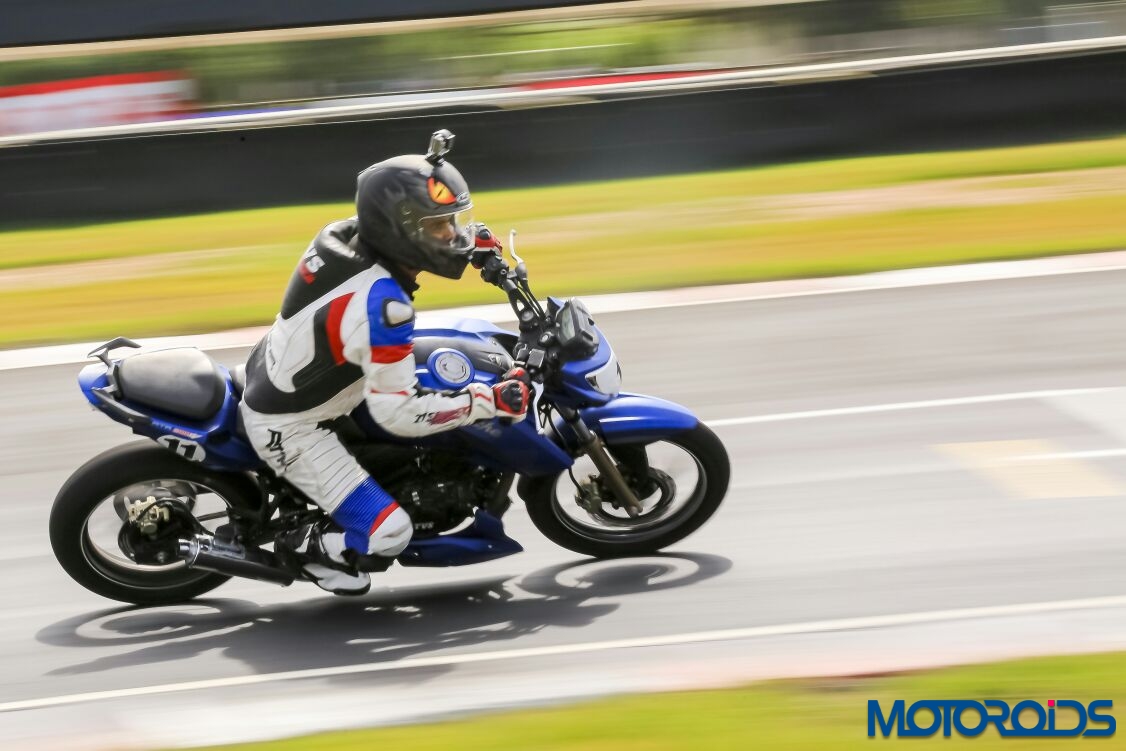 Trackdays are a distant dream for a vast majority of motorcycling enthusiasts in India. With scarce facilities for organizing these events, you need a liberal amount of good fortune (money included) for an opportunity. Well, I was fortunate enough for my second stint at the MMSC track in Sriperumbudur and this time the lucky draw came from TVS Motors. My gratitude goes out to those who conceived the idea of a media race, acquainting journalists the hard works that goers into running the TVS Racing show. 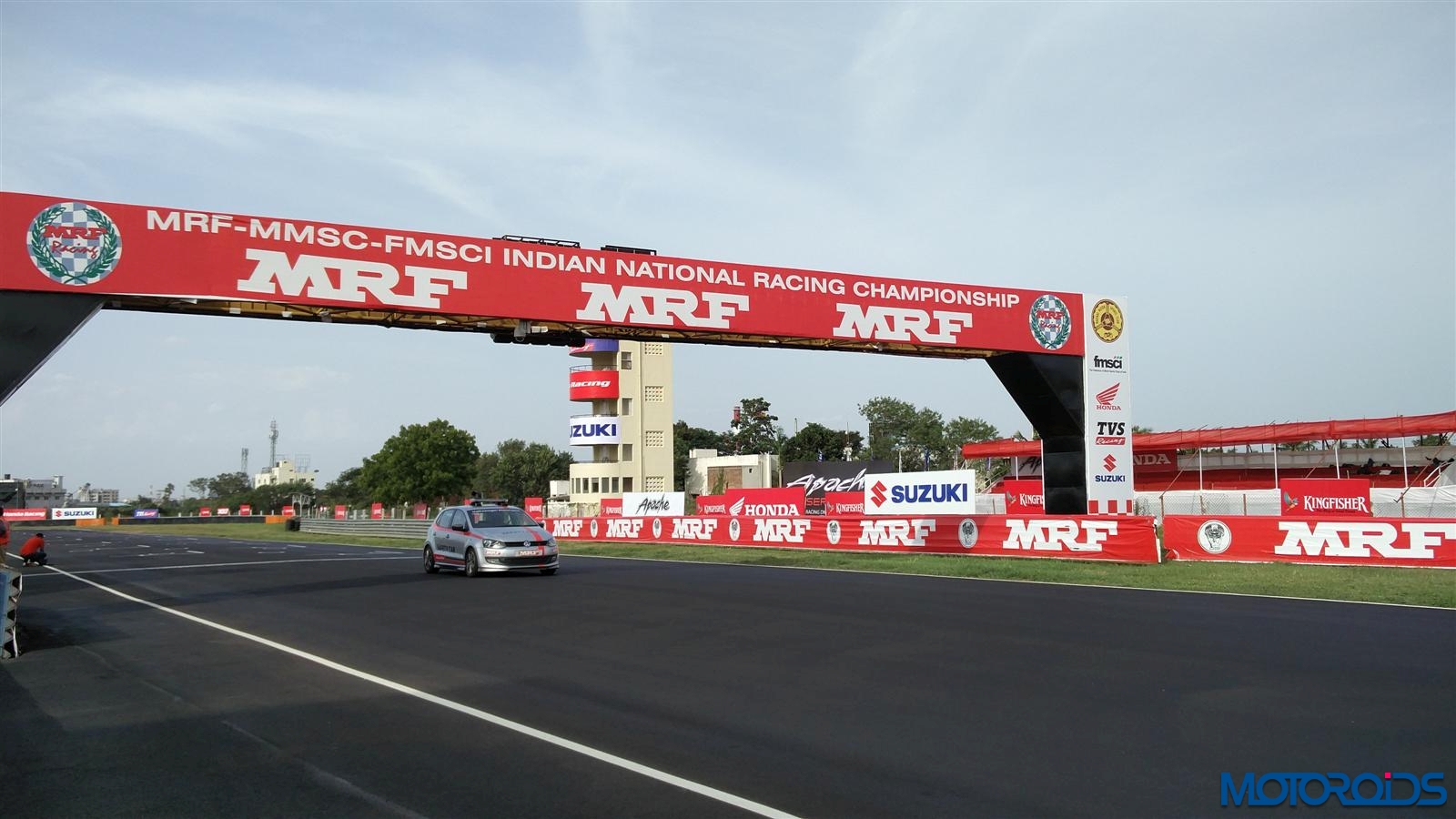 To get everyone into the heart of the action right from the word go-, it was a direct check-in at the track from the airport. The screaming exhausts of bikes whizzing past were already getting us anxiously await our stint on the track. A briefing session ensured that all the riders knew everything about the race control flags before getting onto the track. A few helpful riding tips along with precautions were good enough to get ourselves on the practice laps. We were given the new Apache RTR 200 4V for the TVS One Make Media Race in a tweaked avatar and at the same time retaining the look of the regular production motorcycle. 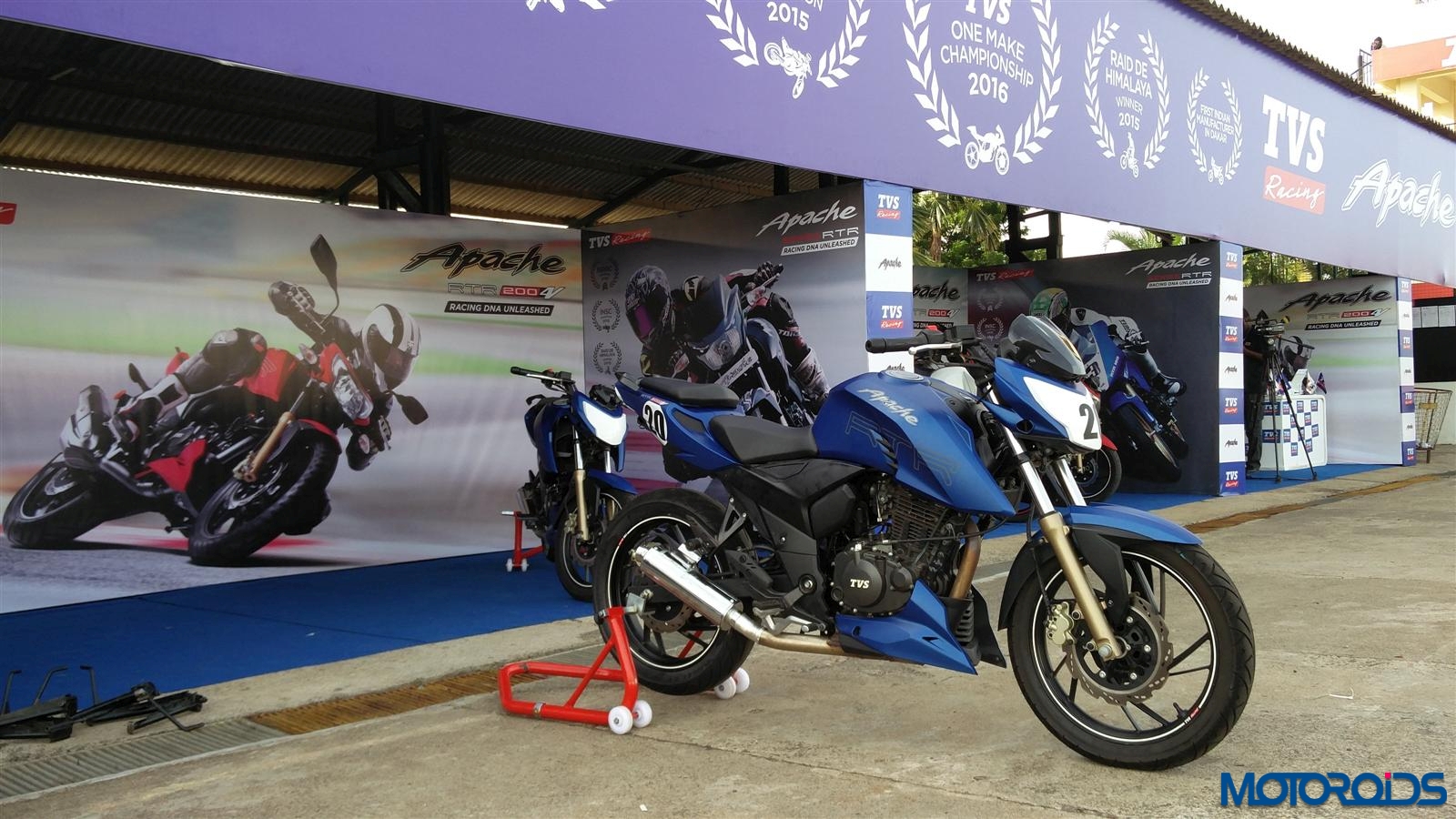 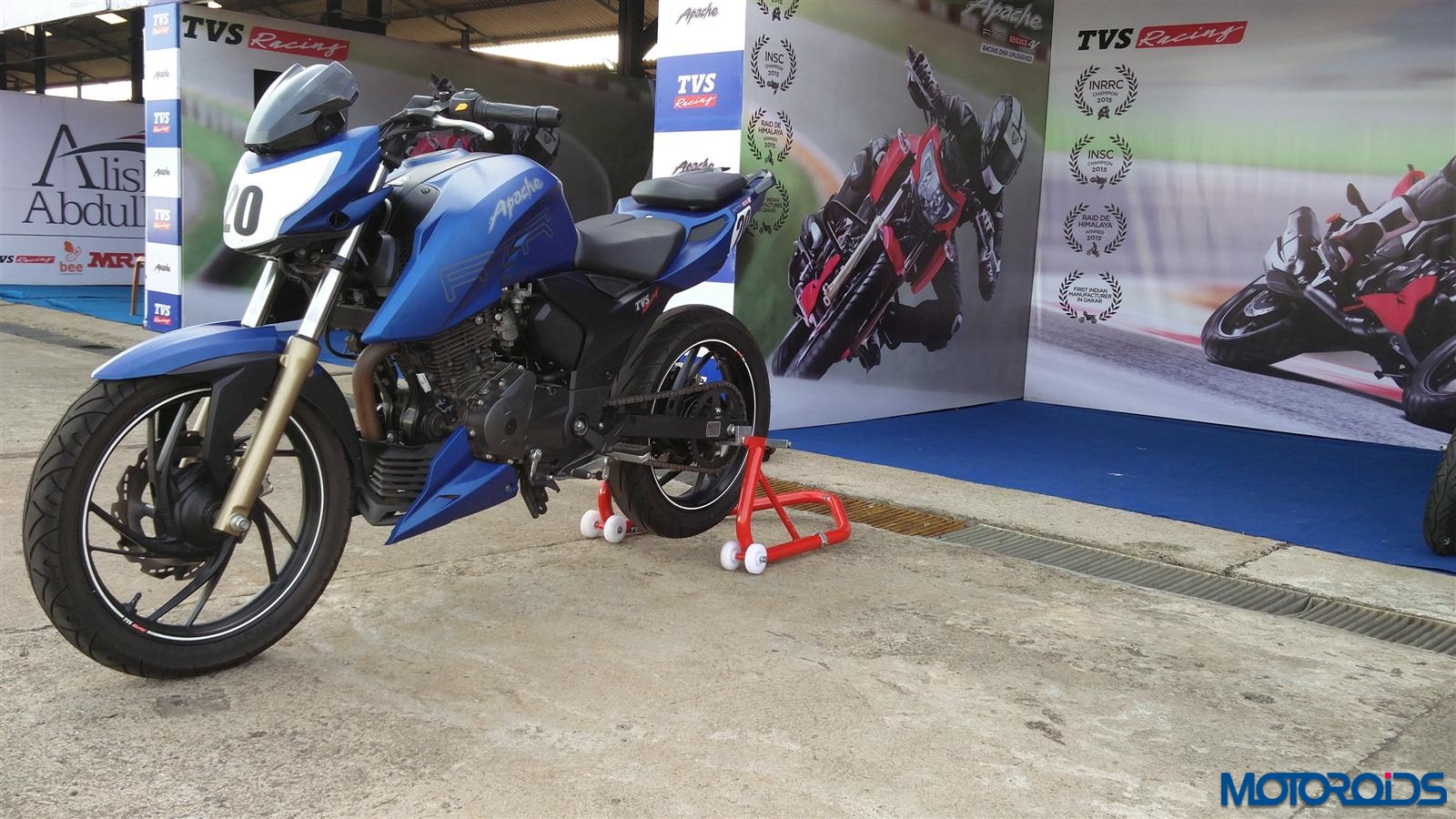 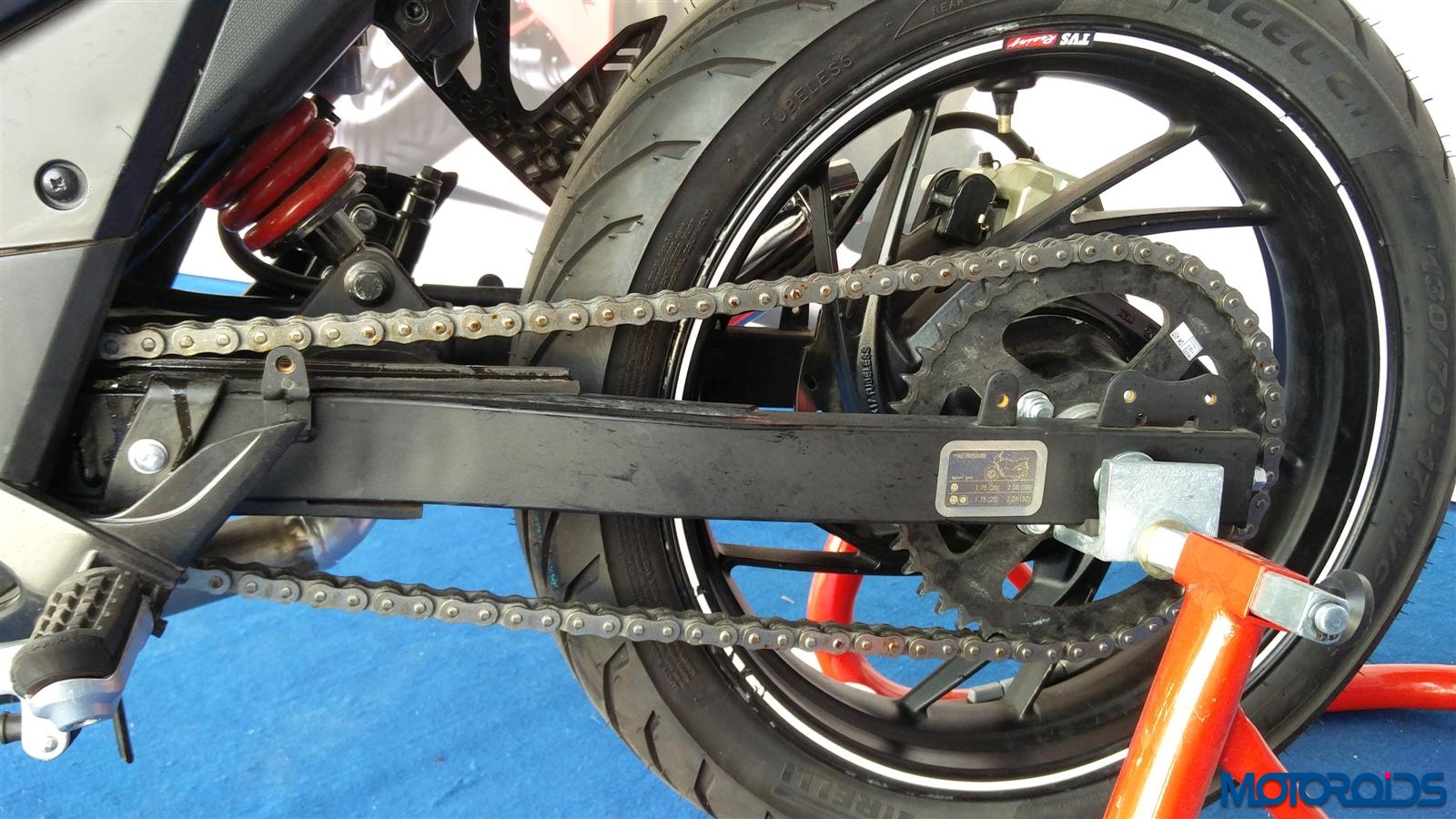 Surprising the suspension has been kept stock which TVS claims has the right mix for track and road going performance. 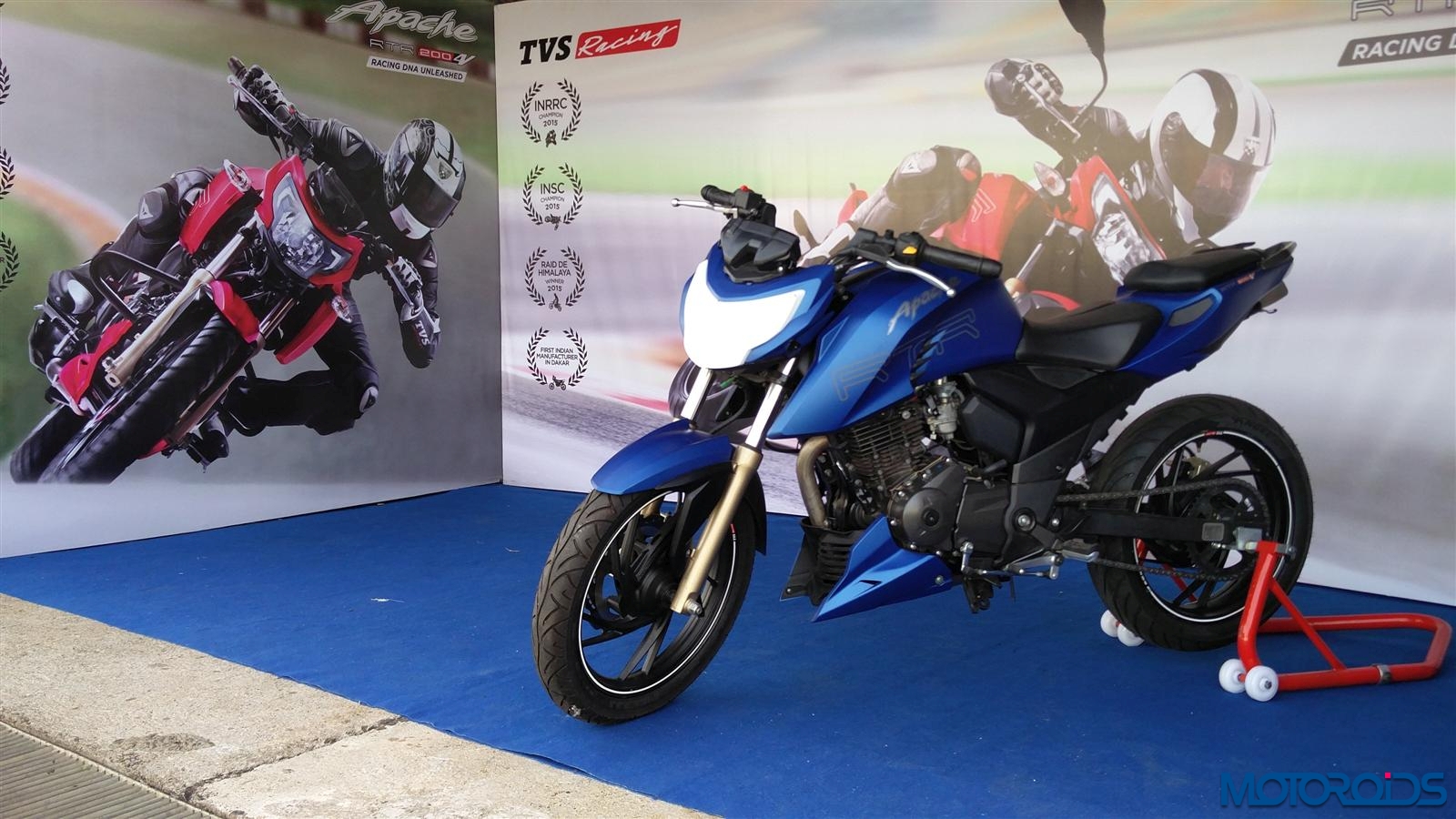 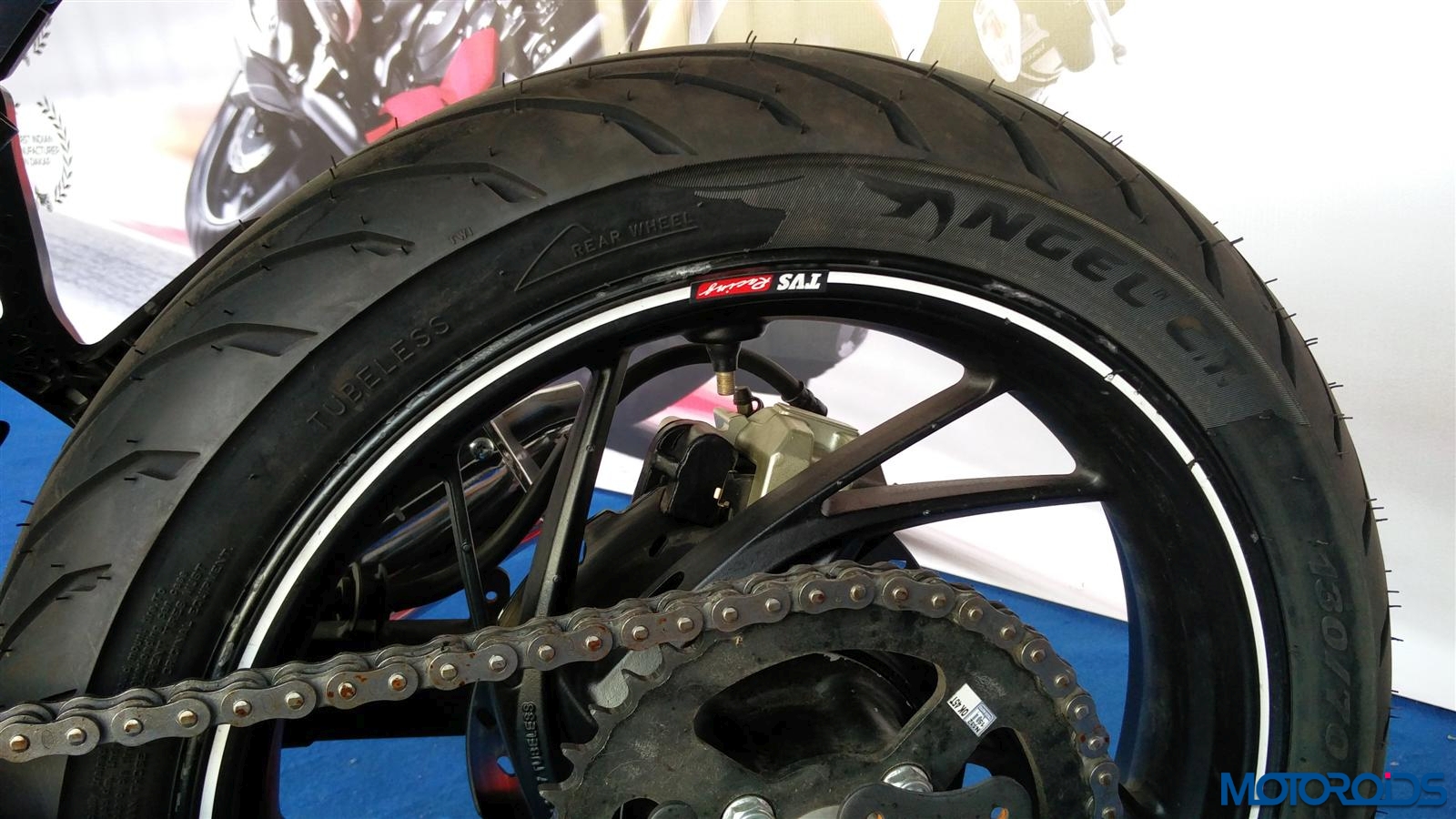 Customized camshaft and retuned carburettor for a punchy performance 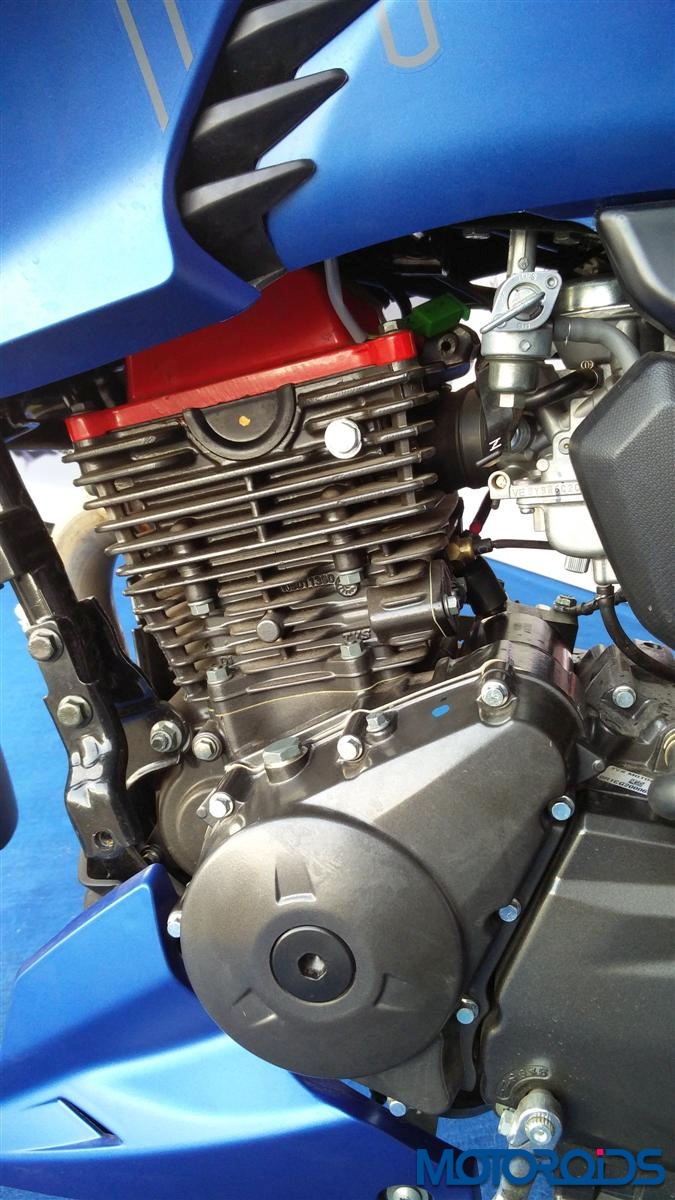 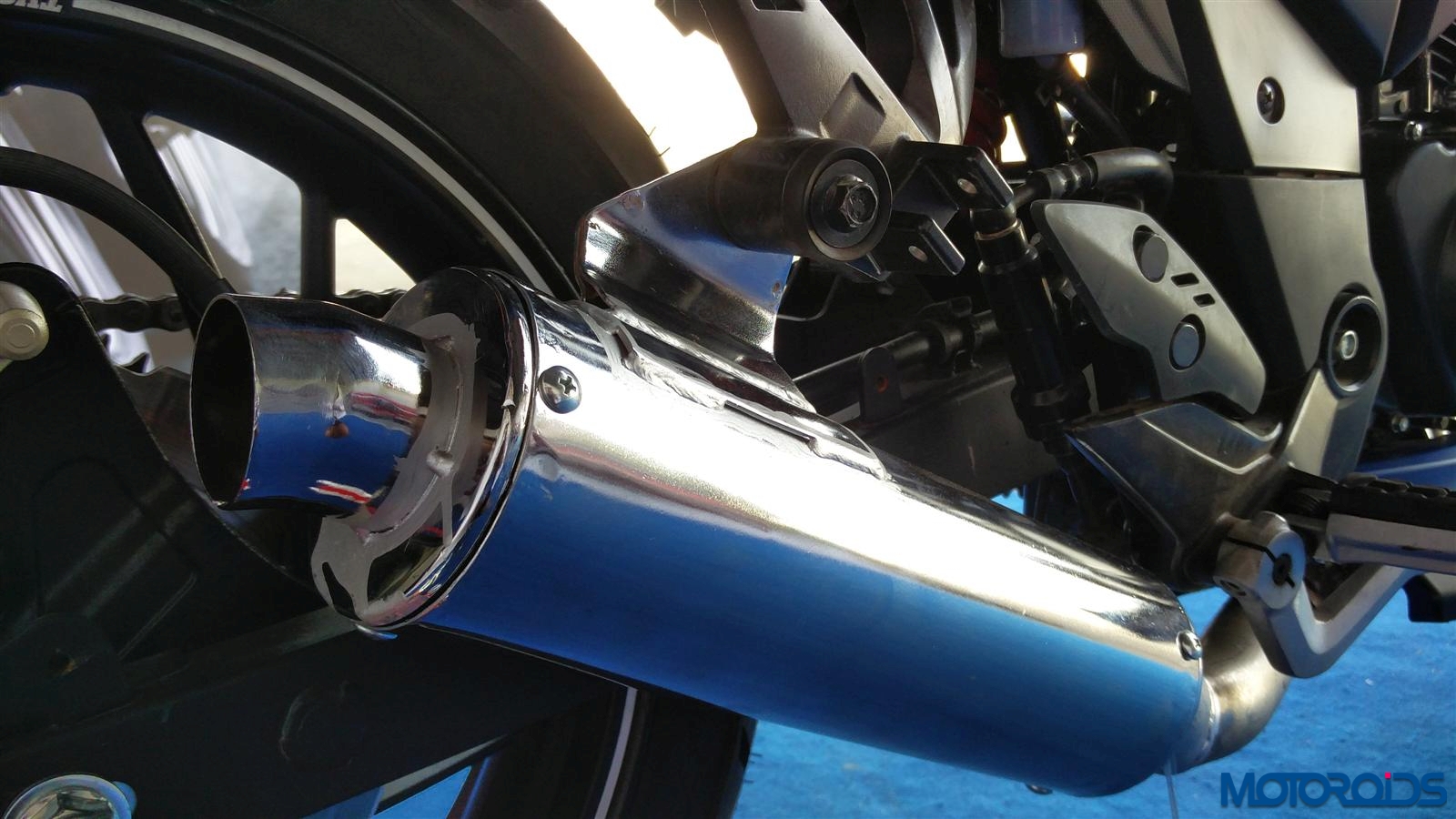 These modifications shave nearly15 kg off the motorcycle while adding 3 bhp of extra power, shooting up the power to weight ratio of the TVS One Make Apache RTR 200 significantly. 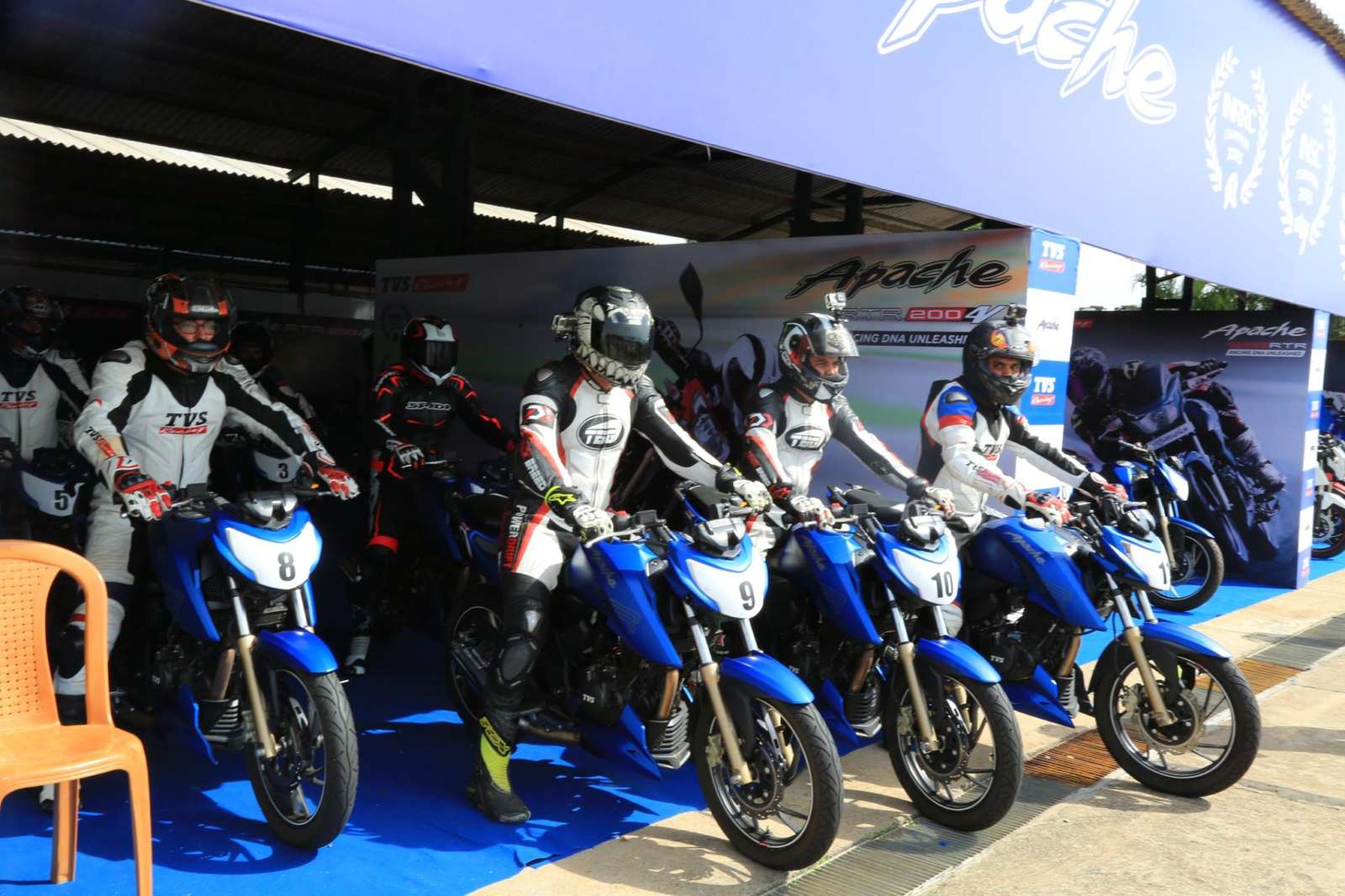 The practice laps were scheduled later in the day which meant lesser heat to deal with. Squeezing yourself into racing leathers is an experience. Look t yourself in the mirror wearing one and you realise you never looked this good. 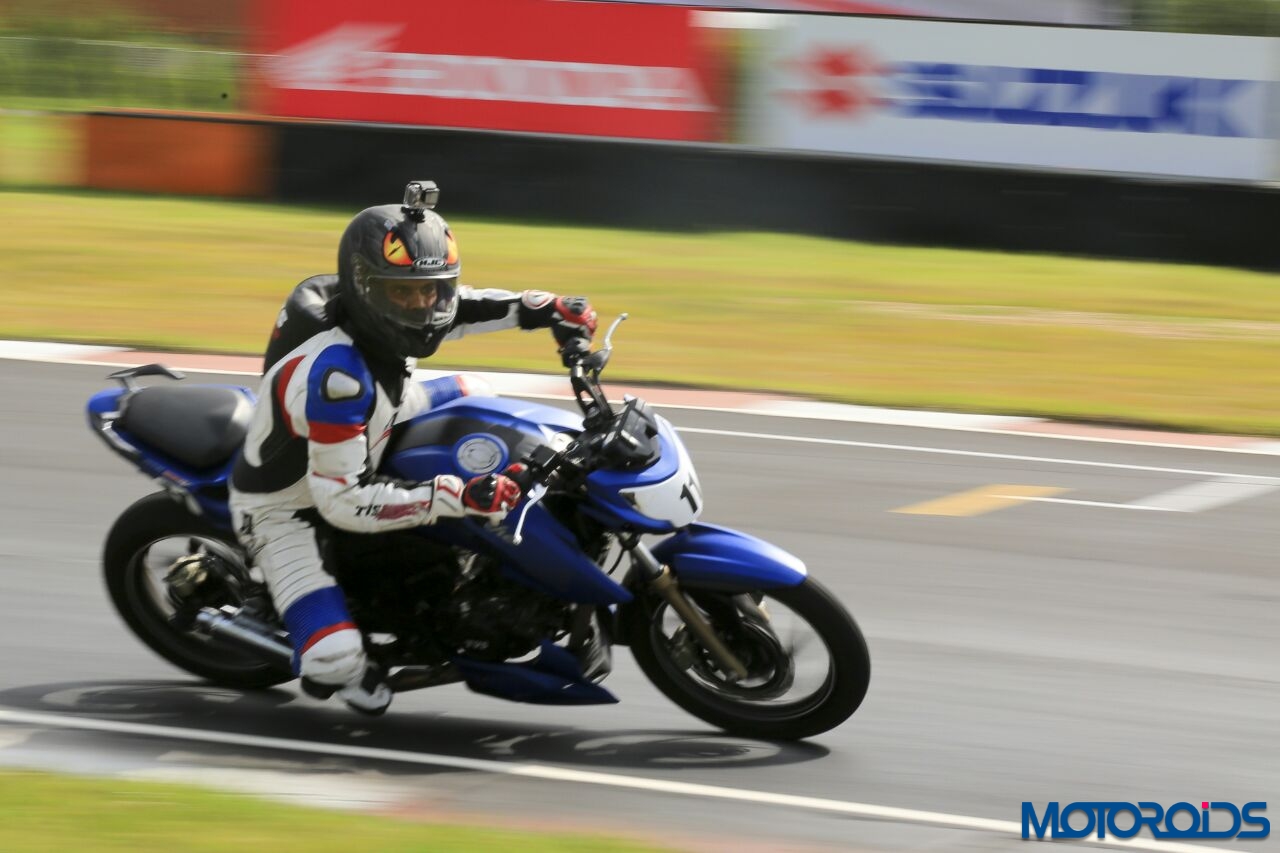 The new Apache RTR200 felt like a perceptibly different bike, as compared to the long term machine we have in our garage – the engine refinement, smooth shifting gearbox, fabulous brakes and sticky rubber at both ends, I was in love with the motorcycle on the very first lap. A street bike on track might invoke some raised eyebrows, but in all honesty, the RTR didn’t feel like a street bike at all and despite retaining the stock handlebars and suspension from the production RTR200- it felt like a track bike, a comfortable track bike if I have to define it. It would lean into corners with utmost ease feeling absolutely weightless – the tyres offered impeccable grip though I wished for a lower profile set. Also, elevated footpegs would have eliminated instances of peg-scraping- however hanging off slightly more than usual managed to address the issue. My liking for the motorcycle grew with the number of times I went around the 3.74 kms long MMSC track. The end of the practice session wasn’t a pleasant feeling as I was in love with the bike. I had to drop the bike in the pits with a heavy heart. This made the anticipation for qualifying and racing next day even more exciting. 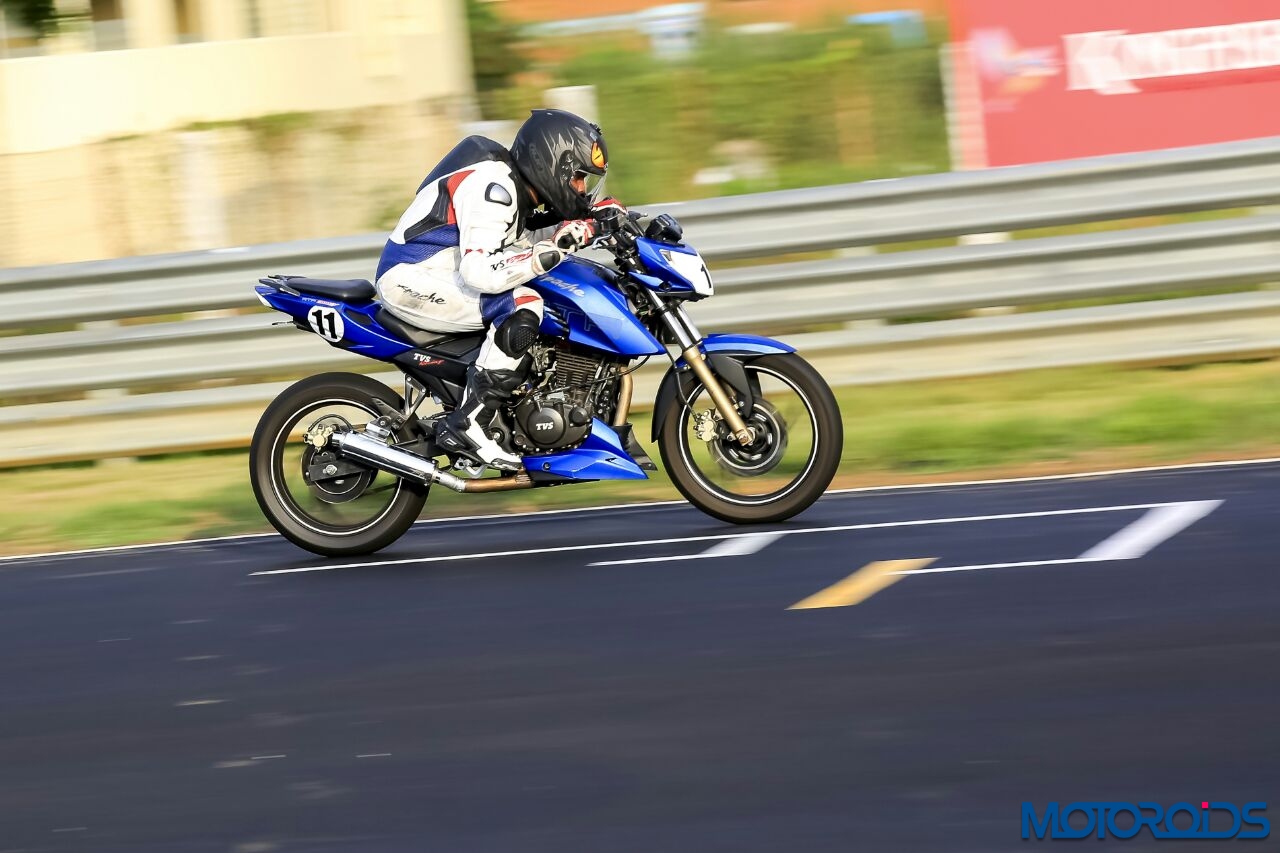 An early wakeup call and post a scrumptious breakfast at Citrus Hotel, we hurried to the track, for the big day was here. The MMSC track was a challenges for us riders to go around in the minimum time possible, while also reducing out lap times with every passing lap. We were raring to go flat out to our gut’s limit sans any apprehensions or fears. The qualifying was a matter of ten minutes, a small window, but enough to put your three fastest laps. With some technical issues related to gear shifts- I somehow managed to secure 7th position on the grid unlike my last outing where I was at the far end. More than the qualifying position I was glad to have spent more time with the bike on the track. 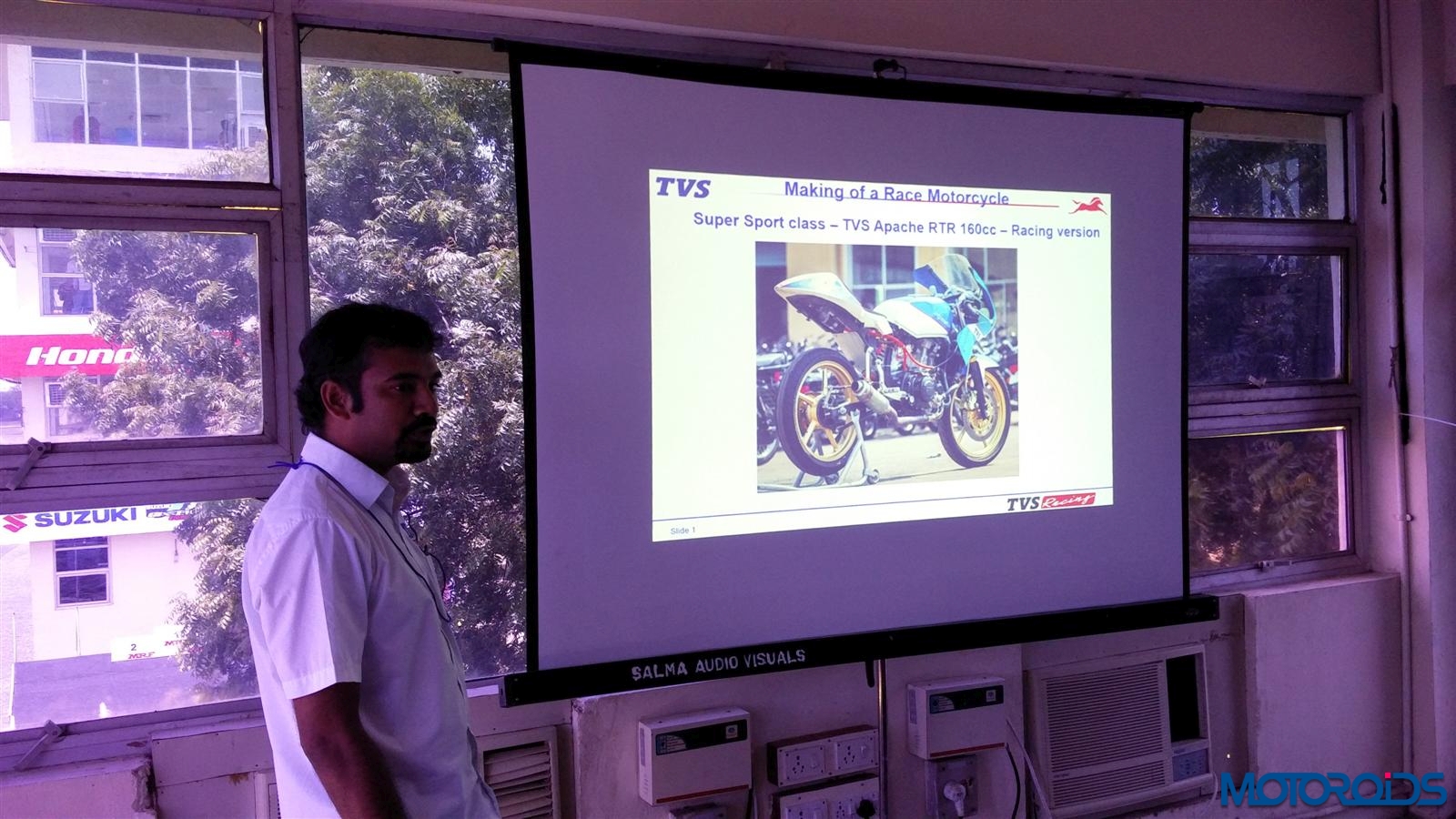 With the race slated in the afternoon and other races in progress- a small session was held highlighting all that goes behind the curtains of TVS Racing and it bought me a newfound respect for TVS as a manufacturer. They might not be amongst ones with leading sales figures- but their obsession towards racing including their recent Dakar stint and the support for budding riders from both genders brings nothing but joy to an automobile enthusiast. 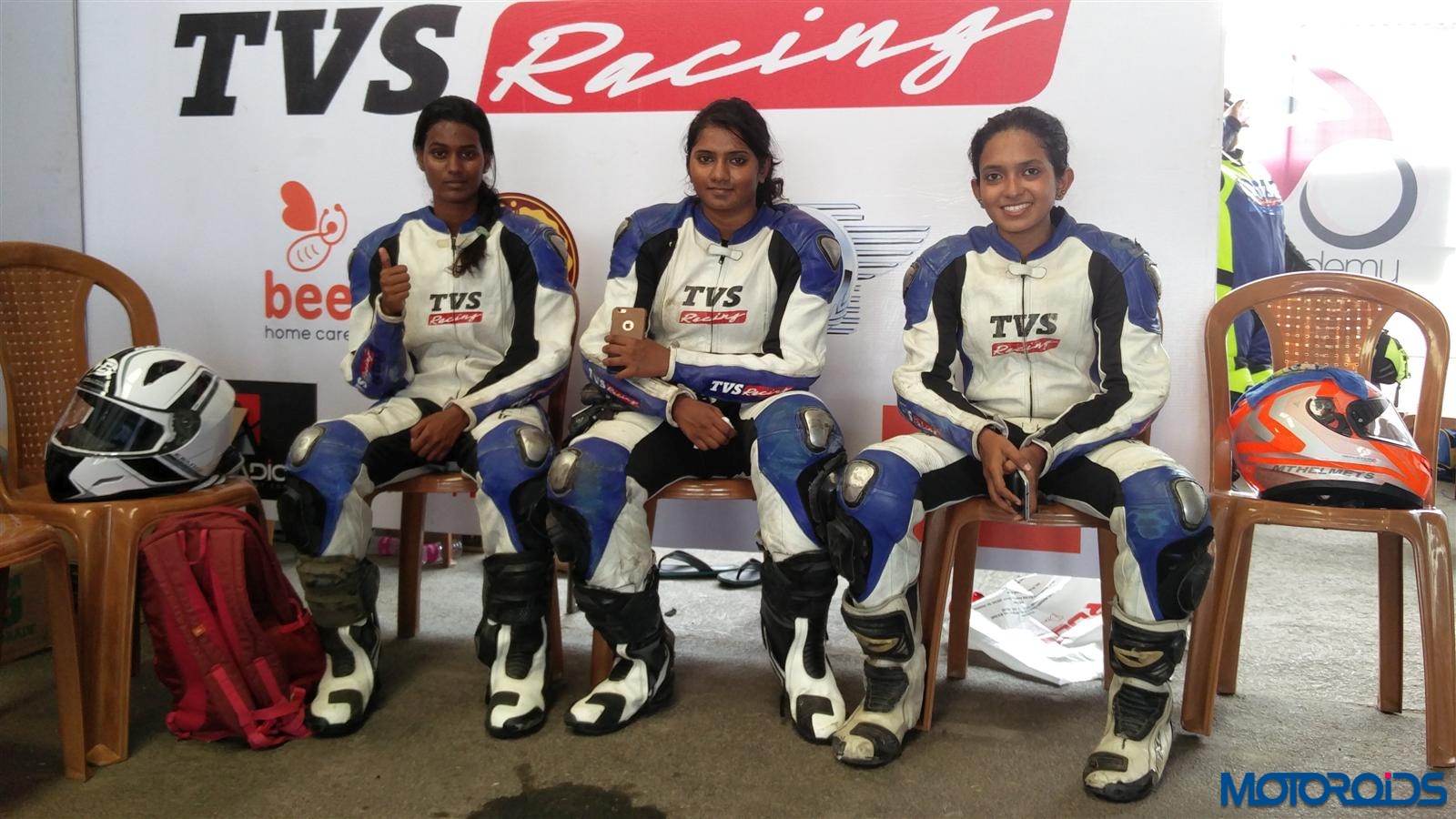 Though at the same time, they did express disappointment over a lack of audience which showed up in small numbers. But seeing the number of races taking place over the weekend in different categories with more and more riders adding to the competition, it’s certain that motorsport would garner the the attention it deserves in due course. 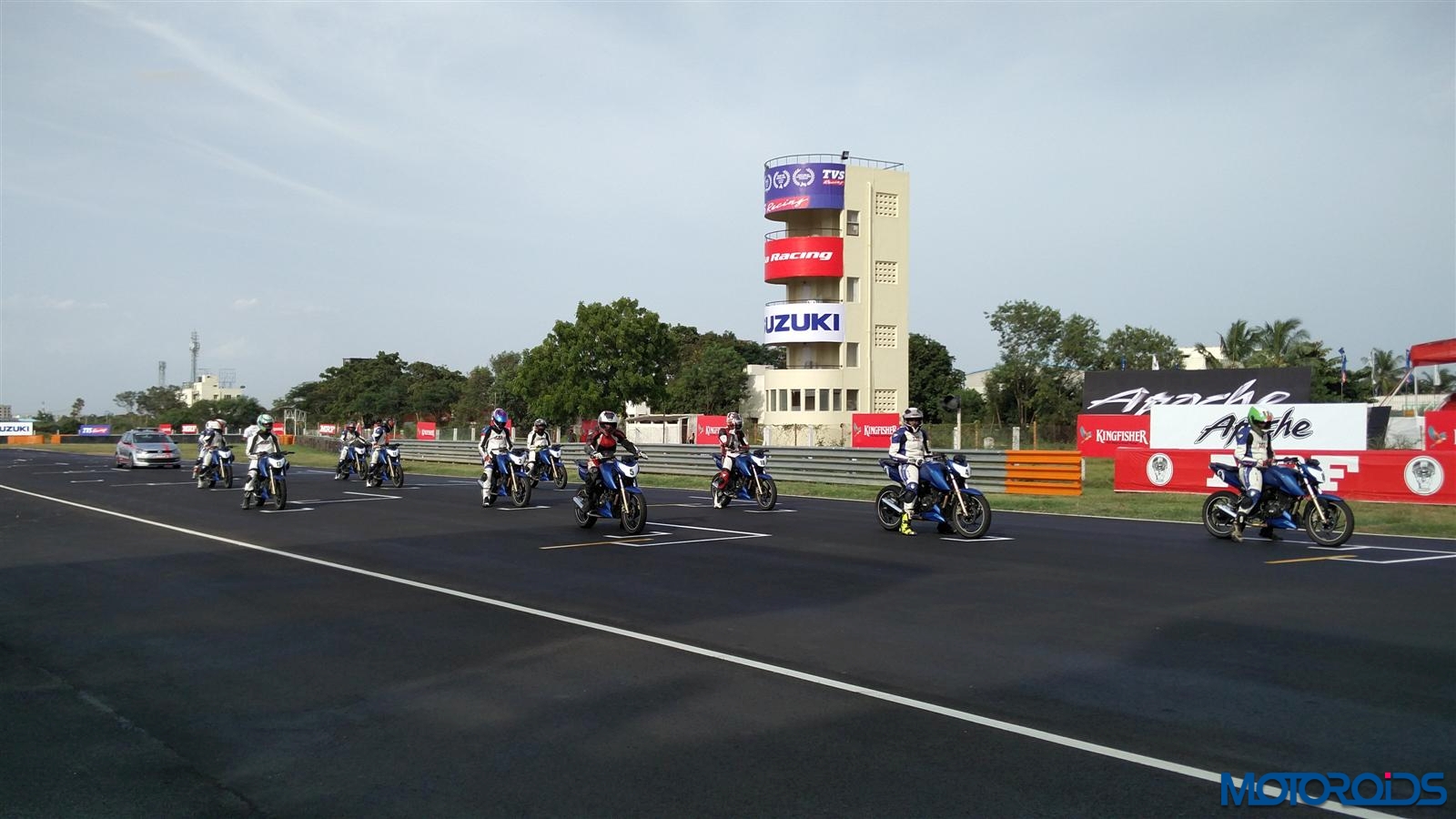 In the meantime it was our final stint at the MMSC- a bid to push our skills and the motorcycles to the limit. I believe everyone should race once in their lifetime on a track. The feeling of being on the starting grid waiting for the red lights to go off is just something else- the rush of adrenalin puts everything around you in slow motion. Off go the lights and so do the riders from the starting grid and this time everyone had a good start and my hopes of overtaking riders before C1 didn’t fructify.

The leaders broke away and the rest of us were left to fight our own battles- aiming to go around the same corner faster than before. I somehow managed to gain two places and climbed to fifth position, but minor technical issues during gearshifts got the trailing pack to catch up and I dropped to sixth. A slight gap on the final corner by the rider ahead was enough room for me to sneak through but carrying more speed than required landed me off the track and I raced past the checkered flag in fifth position riding on grass than the track. 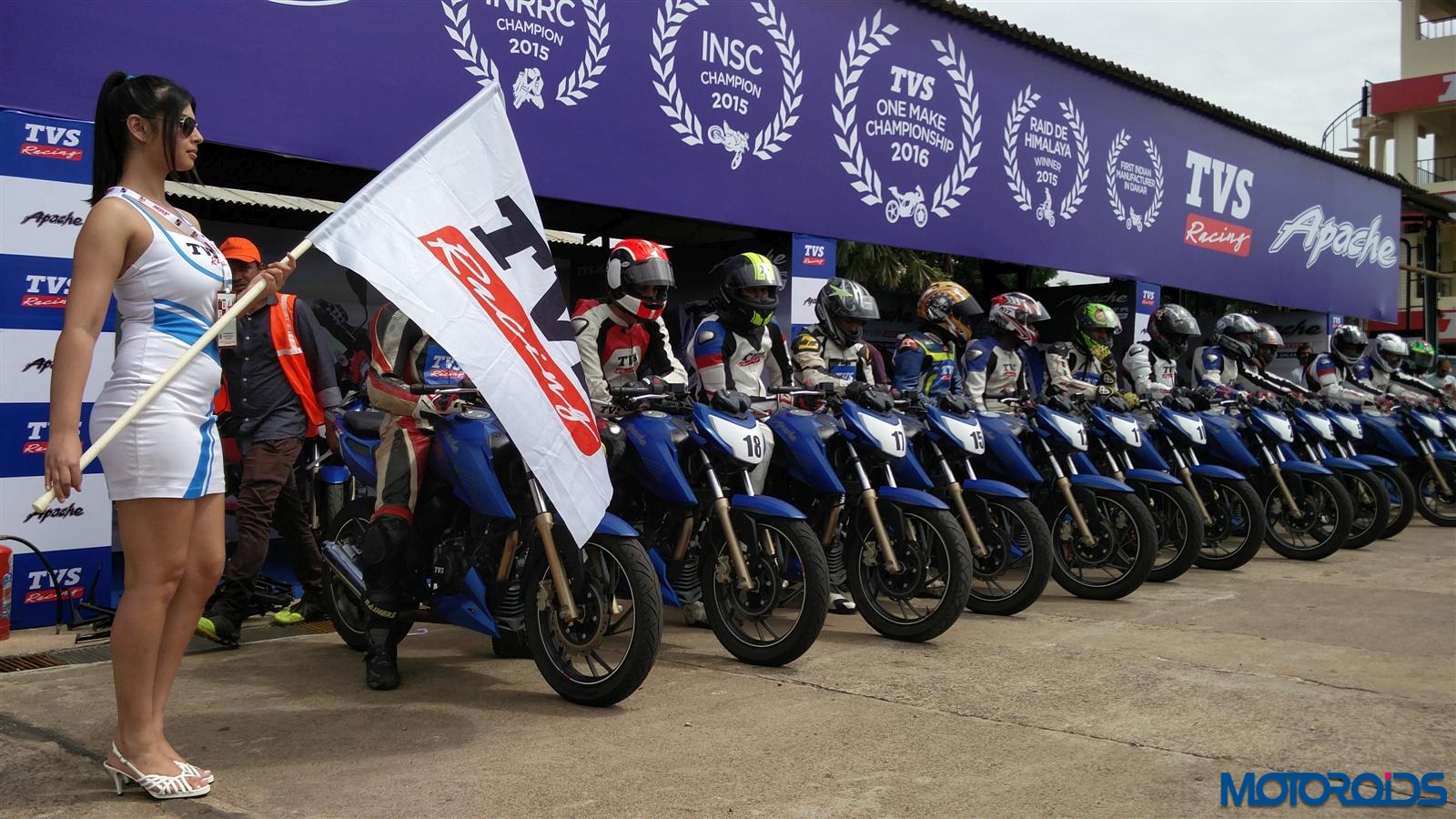 Back to the pits- everyone was elated irrespective of the positions they finished in. Each one of us felt blessed to have gotten the opportunity and the joy of racing on a proper racetrack. As mentioned earlier- not that everyone gets that elusive opportunity and I was indeed lucky to have got this chance. Though that humbled feeling of being an average rider compared to the faster guys was very much there, but at the same time the huge scope to improve as a rider was an encouraging emotion and it only amplified my yearnings to be on the track again. Thanks again to TVS Motors for giving this opportunity to us motorheads a chance to race, pushing our riding skills even further and bringing out the best in us. A greedy me, however, would plead for yet another stint!