We have been closely following the India launch of iconic Triumph brand of motorcycles and seen here is a pic of the upcoming motorcycle maker’s Bangalore dealership. 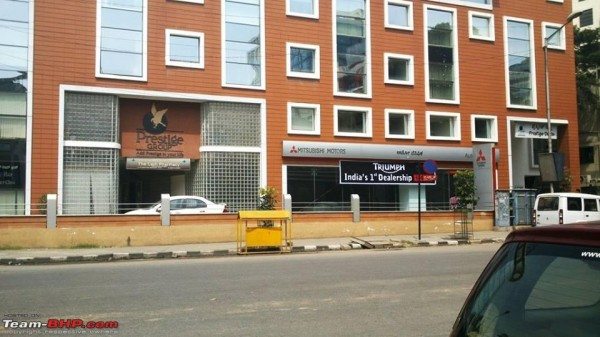 This pic comes from Team BHP member ‘livyodream’ and it is being said that Bangalore would become the first Indian city to get a Triumph motorcycles dealer. The Triumph Bangalore dealership is shaping up on Residency Road and will be soon followed by dealerships in New Delhi, Mumbai, Chennai, Hyderabad, Cochin and Ahmedabad.

The highly awaited British bike marque will officially enter India on November 28 and we just can’t wait to have a rendezvous with the very promising Triumph models. Bike aficionados would remember that Triumph unveiled its product portfolio for India way back in early 2012 at the last edition of Indian Auto Expo and even announced model-wise prices.

If these prices are to be retained, Triumph Bonneville, which would be the entry level model in Triumph India line up, would go on sale for a price of INR 5.5 Lakhs. The highly publicized Rocket III will become the flagship model and go on sale for a rather steep INR 22 Lakhs.

Worth mentioning here is that thanks to various factors such as rupee-dollar fluctuations, we feel that it would be almost impossible for Triumph India to retain these prices. However, we also reckon that an entry in to the coveted Triumph club won’t set you back by more than INR 6.25 lakhs.

Excited about Triumph Motorcycles India launch? We are.