Home News Triumph for Volkswagen and Ogier at Rally Italy 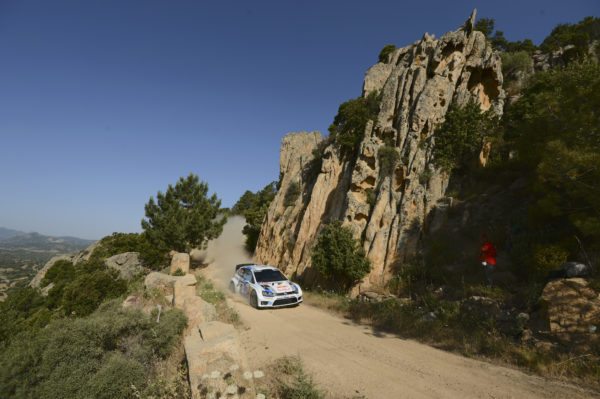 At the halfway point of the FIA World Rally Championship (WRC), Volkswagen dominates the proceedings with its fifth win in seven rallies. The Volkswagen team has also comfortably extended its lead in this, the most prestigious motorsport world championship after Formula 1. Sébastien Ogier/Julien Ingrassia (F/F) won the rally in Sardinia in their Polo R WRC with a lead of 1m 16.8s over their closest competitor, Thierry Neuville (Ford). The two Frenchmen have therefore extended their lead in the driver/co-driver rankings to 64 points. Their Volkswagen team colleagues Jari-Matti Latvala/Miikka Anttila (FIN/FIN) demonstrated an impressive final spurt to likewise make it onto the podium, finishing in third place, in spite of having dropped back to twelfth place due to a flat tyre during the first stage. This puts the two Finns in second place in the driver/co-driver world championship rankings. They also played a major part in enabling Volkswagen’s 315 hp four-wheel drives to further extend the car make’s lead in the Manufacturers’ Championship.

Andreas Mikkelsen, who celebrated his 24th birthday on the Saturday of the rally in Sardinia, again missed out on a good result together with his co-driver Mikko Markkula (N/FIN) – on the third from last stage of the rally, they were instructed by the team to take all available risks in order to secure fourth place overall, but a slip-up then cost them this ranking. Mikkelsen/Markkula veered off the track on a slow corner and caused only light damage to the suspension – but then had to retire from the rally early.

Volkswagen put on a strong team performance in the seventh of 13 events in the WRC season, in front of Dr Ulrich Hackenberg, the member of the Board of Management for the Volkswagen brand who is responsible for development. “It was a great success for the whole of the team and being there to see it was a fantastic experience,” said Dr Hackenberg. “This was actually my last rally as the head of development at Volkswagen, but I will no doubt visit a few more rallies some time. I have put a lot of heart and soul into this project and that doesn’t simply evaporate when you move to pastures new.”

13 fastest times in 16 special stages, seven of which were scored by Sébastien Ogier and six by Jari-Matti Latvala – once again, Volkswagen was able to put its faith in strong drivers in Rally Italy. One of them was in the lead right from the start, while the other one compellingly continued to gain ground – Ogier and Latvala acclimatised perfectly to the tough conditions in Sardinia. Consistency and speed were also the order of the day, with the overall leader Ogier dominating the front position in the WRC pack from the very first stage on Friday and refusing to forfeit it all the way to the finishing line on Saturday. The key to the 29-year-old Frenchman’s fourth win of the season was his clever driving style that went easy on his tyres, which placed him among the top three drivers no less than 14 times in the 16 special stages. His team colleague Jari-Matti Latvala was absolutely on a par with him, himself achieving 14 recorded times that were among the top three. Incidentally, even with his damaged tyre, which cost him 1m 56.4s, Latvala was still only 1m 48.0s behind Ogier after driving 304.50 timed kilometres.

With just two days of rallying in Sardinia, making this the most compact WRC event of the year, the whole team needed to put in a good performance. The Volkswagen team provided the three pairs of drivers with major support during the rally’s six services, with their meticulous and reliable work meaning that Ogier, Latvala und Mikkelsen were working with the perfect materials at all times. On the Saturday, Sébastien Ogier’s mechanics sent the Polo R WRC out on the final four special stages with a subframe that had been replaced just to be on the safe side together with power steering. This involved some incredible work, with two mechanics replacing the component in just eight minutes.

Rally Italy once again made huge demands of the drivers, with the extreme temperatures on the one hand and very narrow tracks lined with natural rocks on the other. A combination of gravel and a loose layer of sand on top made the first time of driving the eight special stages, each of which was driven twice, a highly slippery affair. These conditions meant the drivers had to use all their concentration and skills to use their tyres wisely. Even the slightest of errors could have brought things to an end for a driver at any time or could have cost them some precious time.

For the fifth time out of six occasions so far, ‘Mr Power Stage’ Sébastien Ogier and Volkswagen achieved the fastest time in the Power Stage, during which bonus points are awarded to the top three drivers. His team colleague Jari-Matti Latvala likewise picked up some bonus points by finishing third in the 22.25-kilometre stage. This means a unique run of success for Volkswagen continues, with the brand having achieved all of the fastest times in the Power Stages contested in 2013.

Volkswagen picked up a maximum amount of points in Sardinia, while the current overall leader Sébastien Ogier extended his lead in the drivers’ rankings, with his co-driver Julien Ingrassia doing the same in the corresponding co-driver rankings. The pair now have a lead of 64 points over their team colleagues Jari-Matti Latvala/Miikka Anttila, who are ranked second. Volkswagen is also at the top of the Manufacturers’ Championship thanks to its two strong duos and was able to extend its lead over the defending champions Citroën to 46 points as a result of Rally Italy.

Jari-Matti Latvala, Volkswagen Polo R WRC #7, said: “Third place is a fantastic result overall – but we could have done better. The flat tyre in the first stage was nobody’s fault but our own – we should have been more observant during the recce and should have had that spot of the track in our pace notes. Losing two minutes as a result was disappointing at first. But on the other hand, it also gave us the opportunity to attack without any pressure and to challenge our competitors. Our speed was very good throughout the rally, and that’s what allowed us to grapple our way back up from twelfth to third place. The team played a big part in that too, so thanks for that, guys. I really felt at home in the Polo R WRC and will tackle my home rally in Finland filled with confidence.”

Sébastien Ogier, Volkswagen Polo R WRC #8, said: “It feels fantastic to be back on top of the podium again! I was really beginning to miss that feeling after the last two rallies. I’m simply delighted – the team did a fantastic job and the Polo ran like a dream all weekend. We now have a very comfortable lead in the Drivers’ Championship rankings. The rally was incredibly demanding physically, due to the high temperatures, and it sometimes got as hot as 45 degrees in the cockpit. On the second day in particular, you came close to your limits and you easily lost three to four litres of fluid. So I’d like to say a big ‘thank you’ to our team members who look after us and to the physiotherapy team, who did a great job of taking care of us. The heat really takes it out on the tyres and the car too. My tyre-friendly driving style was no doubt one of the reasons for my victory. I was especially pleased to once again win the Power Stage. I had a tough fight on my hands there with Thierry Neuville, who was incredibly fast during that stage, as he was throughout the rally.”

Andreas Mikkelsen, Volkswagen Polo R WRC #9, said: “I’m extremely disappointed, of course, because we got off to a very good start in Rally Italy and I think we put in a good performance. That is, until our slip-up today. We wanted to go in for the kill and clinch fourth place. In the afternoon session, I had already made good eight seconds on Dani Sordo in the first of the four remaining stages. I only needed around twelve more seconds to pass him, so we went for broke in the following stage too. But then I braked too late on a slow corner and we slid and hit a tree stump, which tore off our tie rod. So that was the end of that. I had hoped for a slightly different outcome on my birthday. But I think we were again able to gain a lot of important experience during this rally.”

Jost Capito, Volkswagen Motorsport Director, said: “What more could we ask for? Rally Italy was a resounding success for Volkswagen and marks another milestone in our first season in the World Rally Championship. If somebody had said ahead of the season that we would be leading in all three championship categories and that we would win five out of the seven events in the first half of the season, we most certainly wouldn’t have believed them. Sébastien Ogier and Jari-Matti Latvala delivered nothing but top performances here in Italy. The same goes for Andreas Mikkelsen too, even though he had to retire just before the end of the rally. He was endeavouring to turn our instructions into deeds by going all out to take fourth place, and had a bit of bad luck in the process. But that certainly doesn’t remotely detract from his achievements as far as the team is concerned. I am proud of all three drivers. They have really earned their summer break. All the same, we are already looking forward to the next rally in Finland at the end of July.”