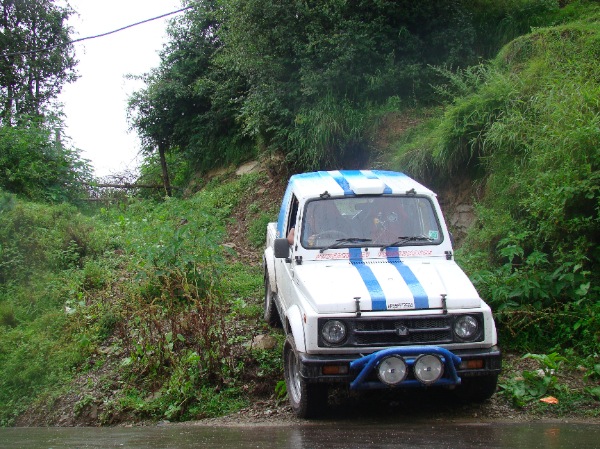 Participating in the SUV- ProStock Amateur Class in the 2010 Raid- de- Himalaya, the duo- Manish along with the navigator Vishal, set out for a test run in their new Gypsy to get used to the handling and modifications made to the car in order to meet the rally’s requirement. They were joined in by few friends who drove along in a Safari, and quickly the trial run for Manish, Vishal and their Gypsy turned into a crazy fun road trip.

We started our journey on the night of 12th August, 2010 from Delhi. Our first halt was at the very famous Gulshan Dhaba in Murthal. After dinner, we drove via Solan. Chail, Kufri, Narkanda, Rampur and reached Saharan where we took a night halt in a government guest house.

The drive was very pleasant from Sahran to Nako, owing to wonderful weather and good roads. And we got to taste some of the sweetest peas in Nako.

This was the most eventful day of our road trip. We managed to drag ourselves out of the hotel early morning at 7am and started our drive to Kaza. We knew we would come across a few drains, including the very famous ‘Maling Nalah’ on our way. But what we weren’t expecting or prepared for, was a landslide which occurred about 5kms before Sumdho. We had to wait for six crazy hours, for the debris to be removed. We resumed our drive at around 3:30pm and headed towards Kaza. By the time, we reached Kaza we were drained of our energy and patience.

It was a long and dreadful day, as we were bestowed upon with mud slush and slippery roads, for over 20kms after crossing Rohtang Pass while making our way to Manali. By the time, we managed to successfully cross Rohtang, the sun had already begun to set. But thankfully, after the muddy encounter was done with, we were able to do speeds of 70km/hr, on a smooth stretch of road which was roughly about 2kms. Soon the darkness, engulfed us and to make things worse, the once smooth road turned into a pool of more muddy slush which was over one feet deep. By the time, we reached Manali, it was late in the night and all of us, just about managed to drop in our respective beds and crashed for the night.

We started a bit late today, owing to the dreadful experience we had the previous day and reached Gurudawara Manikaran Sahib. Here, we had lunch and started our drive back to the capital. We reached, Delhi by evening, fortunately with no incidents. Back at home, we realized that we were already suffering from a road trip hangover. Can hardly wait to get back to the mountains, this October at the 2010 Raid- de- Himalaya.