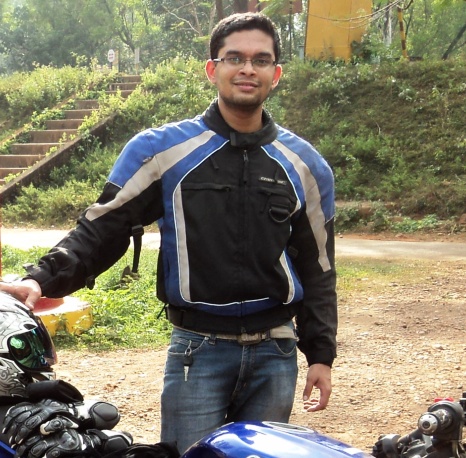 Meghan fell in love with motorcycles at a young age of 6, the days when the thumpers and screamers ruled our streets. He says “I used to get thrilled when my dad used to take me on our Yezdi Classic II and drop me off to school every day”. It was some time before he learned to ride but the moment he did he knew he was like crazy in love with everything quick and mechanical especially when they sported two wheels.

Fast forward into the future he learnt riding his dad’s Bajaj Caliber in high school and ultimately learnt to stunt on it. He joined some of the popular auto-communities online and started organizing offline meets when he was still in 10th grade. His passion for motorcycle grew wings when he bought his first motorcycle when he was just 17. It was a Yamaha RX 135. As young enthusiast he started touring, off-roading, stunting and rallying on his Yamaha-RX and then some more on a Bajaj Discover 125.  He recalls rushing to the R.T.O to apply for his driver’s license the day he turned 18 years old!

At present he owns a 2009 Yamaha YZF-R15, which is his commuter, tourer and off-roader. He also owns a 1973 Czechoslovakian Jawa 250 Type B 353 which he is restoring himself.  As a hardcore motorcyclist and D.I.Y person, he regularly promotes safe riding and usage of helmets during the offline meets. He loves riding to the hills, circuit-racing and by default Moto-GP and plans to hit the racetracks very soon.

“Riding my motorcycles for me is equivalent of praying to god. Motorcycles move my soul. It is my first love”, is how he explains his incredible passion and zest for motorcycles. He is also very passionate about photography and cars. He considers himself lucky for having sampled a variety of sports bikes and recently munched some serious miles on a close friend’s R1. He clocks an average of almost 30000 kilometers every year, has toured most parts of southern India, wishes to tour northern India and conquer Leh-Ladhak and plans on completing the Iron Butt Saddle Sore Certification in the near future.

Why is Meghan a Top Motoroid?

1. He was instrumental in organizing the fabulous Mangalore MotoMeet on May 02, 2010 with Thilak Rao. He played the key role in making all the arrangements for the MotoMeet he organized to bring together auto-enthusiasts of his city and promote usage of helmets and spread the word of safe motorcycle riding. He got the local district administration to acknowledge the event and organized the members of the press to cover the event. The headcount for the meet was close to 40 and the arrangements made were so immaculate that police vans escorted the procession out of the city. Kudos!

2. Meghan has also helped Motoroids with implementation of certain features within the forums. His stint as a tech guy at Motoroids, although short, helped the online community tool a lot with better features and a more exhaustive admin panel.