Naysayers opined that it was too rich, too premium, and, well, too expensive for an MPV. And yet, the New Innova has been flying off the shelves. Extremely popular with fleet operators, the New Innova is also quite a hit with those looking for a big, comfortable car for their family. The Innova Touring Sport is oriented more towards the latter, though – buyers who would want to flaunt a more distinctive, more premium version over the sea of Innova Crysta cars seen ferrying tourists around. The Innova Touring Sport, then, is the absolute top-end version of the new Innova that you can buy as of date. Available only with the 2.8 litre diesel and 2.7 litre petrol engines, in top Manual and Auto trims, the Touring Sport is essentially the same car as the Innova Crysta with a generous sprinkle of garnishing. Here’s our quick review of the Innova Touring Sport, listing out all its additional offerings over its Crysta sibling.

The Innova Touring Sport carries the same basic design as the Innova Crysta. There are, however, a whole bunch of embellishments which make the Touring Sport stand apart. Here we have tried to list all these changes through images and captions 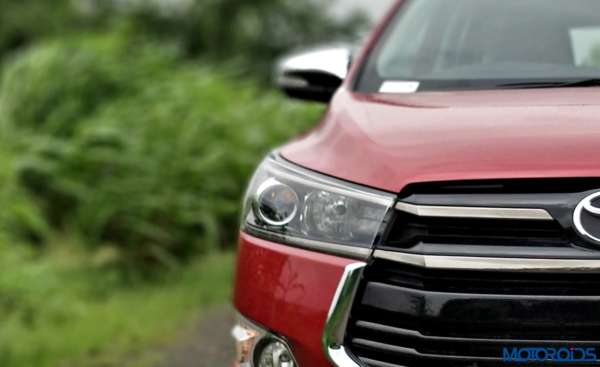 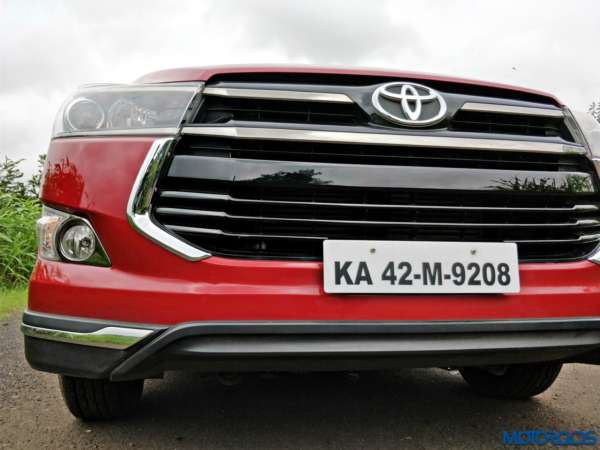 Front bumper under-cladding gets chrome embellishments on the flanks, In addition to the bumper, the radiator grille also gets these boomerang shaped appliqués 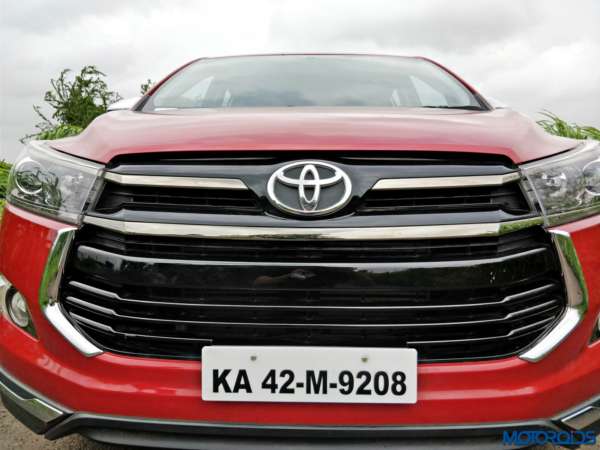 Unlike the Innova Crysta, the slats running through the headlamps and the top portion of the radiator grille are finished in a dark titanium hue. These are drenched in your regular, bright chrome on the Crysta. 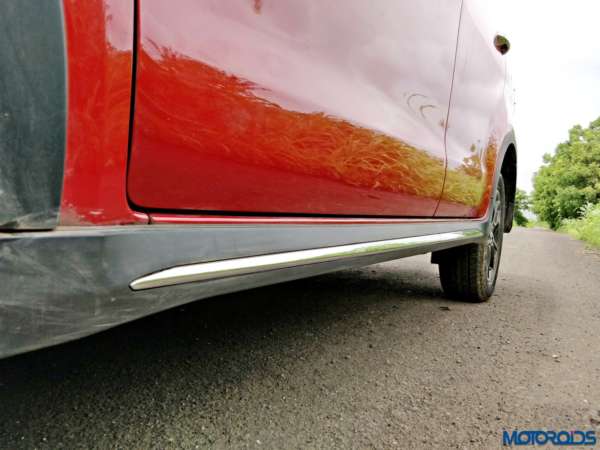 The black under-cladding runs across the Touring Sport, whereas the surface is fully body painted on the Crysta. The side under-cladding, as the case at the front and rear, is lined with a strip of chrome 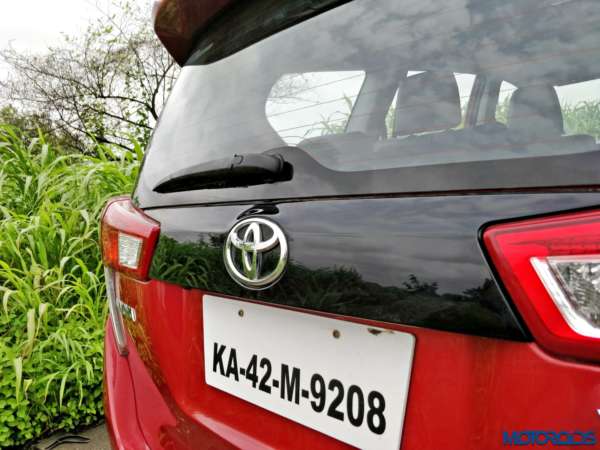 The tail-gate gets a piano black garnish above the registration plate recess. 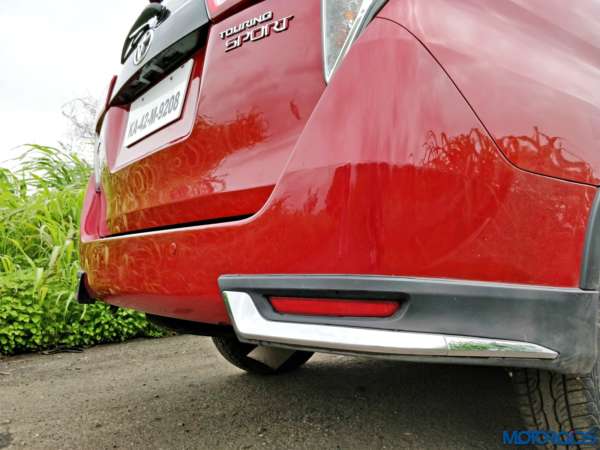 Under-cladding below the rear bumper also gets its share of some chrome. 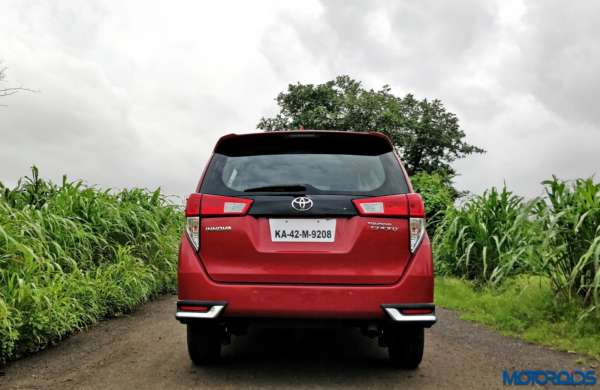 The most evident bit is the Touring Sport badge on the tail gate with red highlights to suggest sportiness. 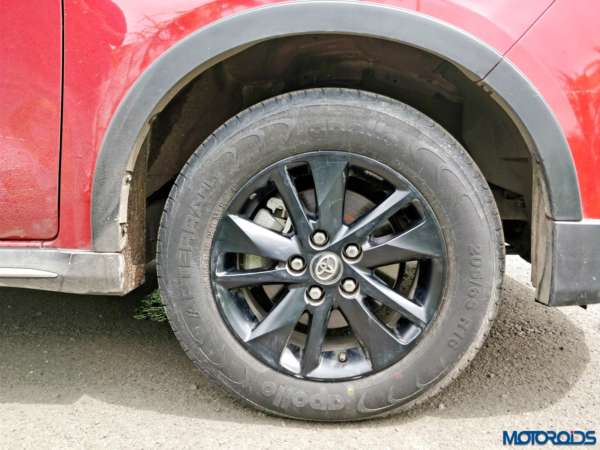 Wrapping things up on the exterior are these all-black alloys, which go well with the red colour, and somewhat add to the sporty theme. 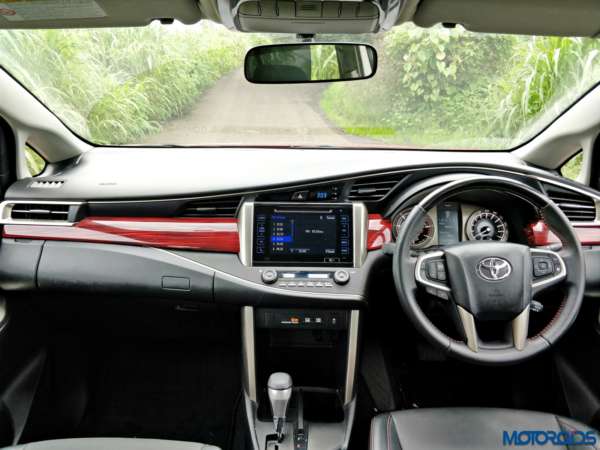 The changes aren’t limited only to the exterior though, and the Touring Sport features quite a few changes inside the cabin as well. The complete list of the enhancements on the Innova Touring sport over the Innova Crysta, are provided below with all the relevant images and captions. 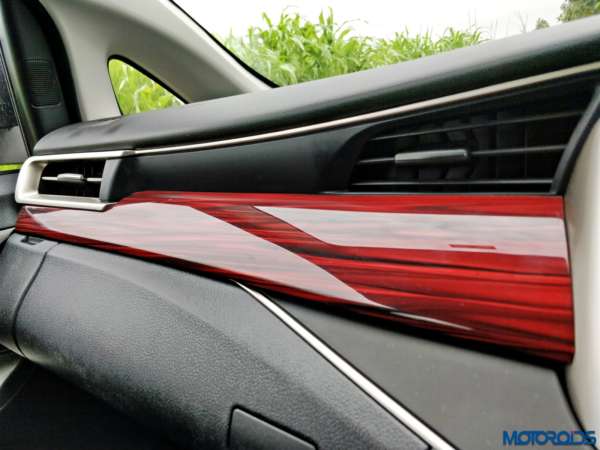 The most evident change to the cabin is the inclusion of this ‘red wood’ pattern on the dashboard, replacing the brown wood inside the Crysta’s cabin. Of course, this is faux wood, and is termed wood as it is meant to resemble the pattern on wood. 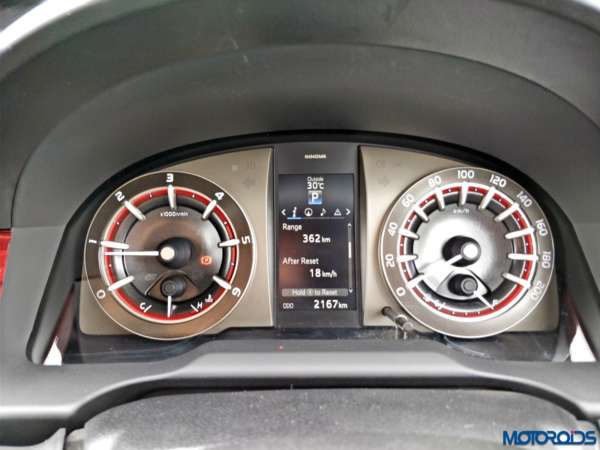 The instrument cluster on the Touring Sport is red backlit unlike the blue lit Crysta console. This again, is a hint at the ‘sport’ branding. Looks nice though, and goes with the red wood appliqué, which by itself may come across a bit loud to some. 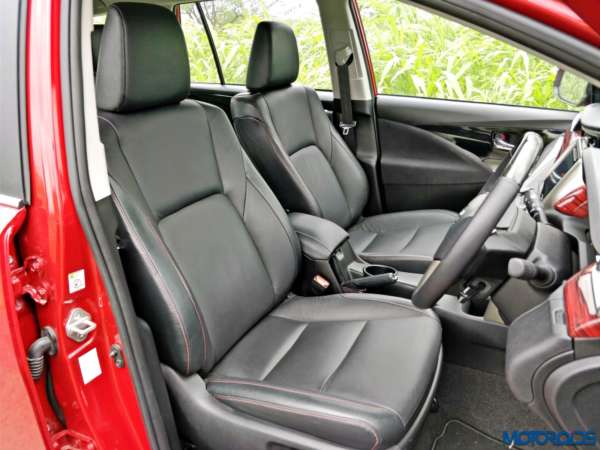 The Touring Sport gets all-black leather upholstery with contrasting red stitching, again, to drive home the point about its sporty intentions. 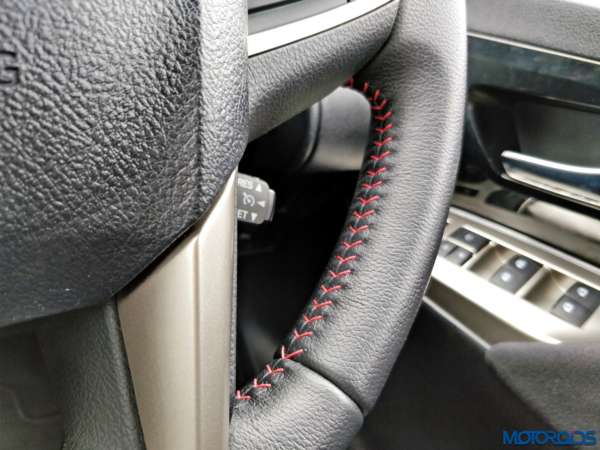 As the case with the rest of the upholstery, the steering wheel also gets contrasting red stitching 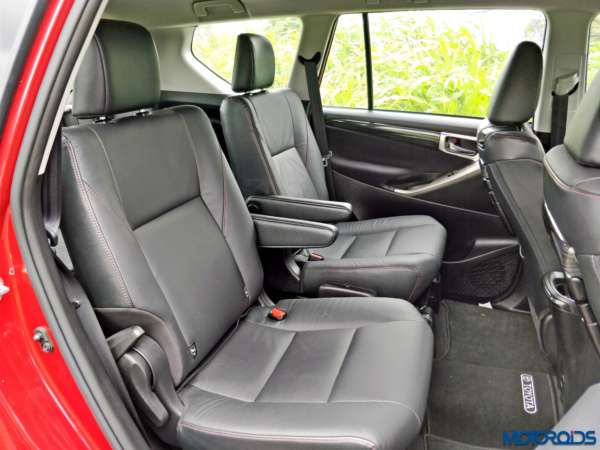 The front and rear inner door panels get piano black garnish, unlike the red wood treatment given to the dash

Does the Innova Touing Sport drive any different from the Crysta?

The Touring Sport is exactly the same as the Crysta in terms of the engines that power it and the rest of the mechanical package. So there’s absolutely no difference in the way it drives. It is available only with the 2.7 litre petrol and 2.8-litre diesel engines though (both manual and AT, only top end trim). The smaller 2.4 litre diesel power plant cannot be had with the Touring Sport package.

You can read our exhaustive review of the Innova 2.8 diesel AT here to know about all its features, performance and other details.

We have also listed down the things that make the New Innova stand out in this list. We’d strongly suggest you go through them.

The Innova Touring Sport by all means is a visual package. It doesn’t enhance the functionality or features of the car in any way. Compared with its corresponding petrol or diesel to end variants, you’ll have to pay around INR 70k extra (ex-showroom) for all the embellishments and visual distinction, both inside and out. 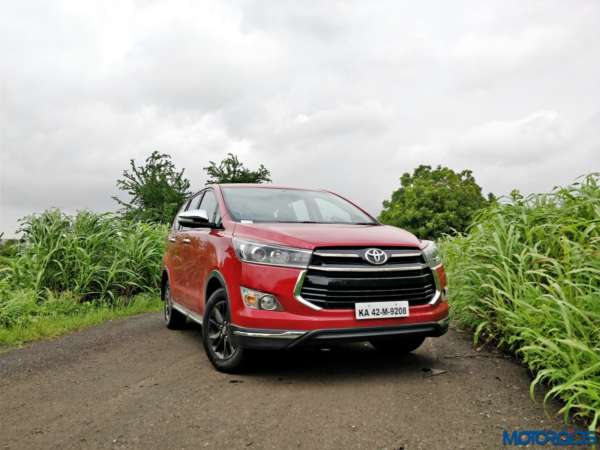 The new Innova, owing to its popularity is a rather ubiquitous car. So if you wish to underline the fact that you’re driving the absolute top end variant available, the Touring Sport makes sense. It highlights the fact that it’s not a fleet car, and that the guy inside wants his car to have a personality. If you think that’s an image you’d wish to radiate, while you have already decided to go for the top end variant, then the Touring Sport makes sense. If you put function before form, though, you’d probably be better off with the top end Crysta variants.