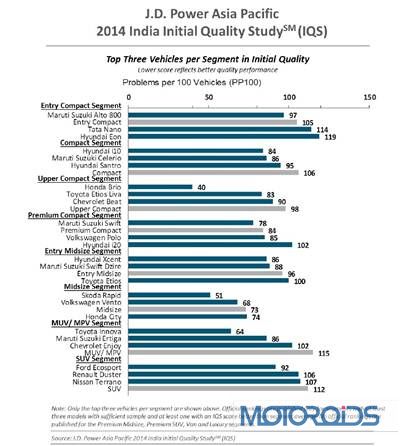 The study, now in its 18th year, measures problems experienced by vehicle owners during the first two to six months of ownership and examines more than 200 problem symptoms covering eight vehicle categories (listed in order of frequency of reported problems) like the: engine and transmission; vehicle exterior; driving experience; HVAC; features, controls and displays; vehicle interior; seats; and audio, entertainment and navigation. All problems are summarized as the number of problems per 100 vehicles (PP100). Lower PP100 scores indicate a lower rate of problem incidence and higher initial quality.

Sharing his views on this occasion, Mr. N Raja, Director and Senior Vice- President, Sales and Marketing, Toyota Kirloskar Motor expressed, “We are delighted at the results, as the feedback and reviews are by our very own customers. This rank bears testimony to Toyota’s ‘Customer First’ philosophy and our commitment to India. Scores received by Toyota in the survey is a reflection of the impact and connect we have had with our customers and we would like to thank everybody involved in making this happen. Such appreciation and recognition further motivates us to incorporate Toyota’s global standards of Quality, Durability and Reliability – QDR in everything we do.”