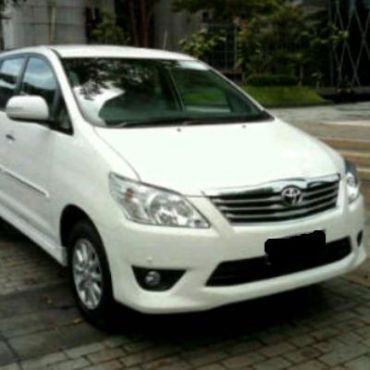 We have reported to you earlier about Toyota planning to introduce a new face lifted Innova. We shared the pictures with you last time but they were hazy. Now we have got some clear snaps of the front of the Toyota Innova facelift model which we expect will be showcased along with the face lifted Toyota Fortuner At the Indonesian auto expo which will take place somewhere next month.
The new Toyota Fortuner and Innova display similar traits in their chrome grille design. The new Innova will be costlier than it’s previous model which goes without saying. We do no expect Toyota to do any change on the engine department as the Innova’s engine have proven to be frugal, we can surely expect new tweaks made in the interior department with some modern gadgetry.

It is expected to make it’s Indian debut maybe during Diwali or Toyota can display it directly at the Indian Auto Expo 2012. With Maruti planning their new MPV the R III concept which has being spied earlier and Nissan thinking of entering the MPV Market, Toyota cannot afford to make the Innova look dated. Tell us what do you think about this new avatar of the Innova.