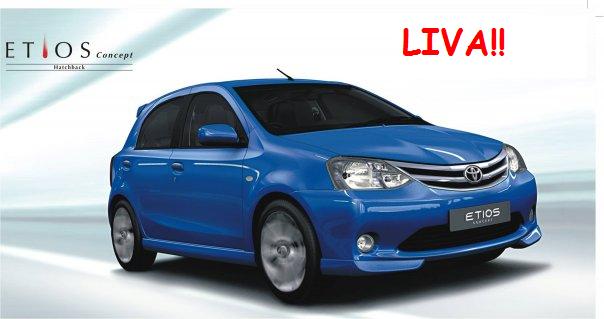 The hatchback version of the Etios sedan will be christened Etios Liva. Toyota will make an official announcement of the name on the 1st of December during the launch of the Etios sedan. Some details about the engine powering the new Etios Liova hatchback have also emerged. The 1.2-litre four-cylinder engine will be producing a peak power of close to 80PS, and will a superlight weight of only 890kg, should be a sprightly runner too. That power output is about 5PS shy of the Swift’s 1.2 K12 engine, but with a weight advantage of around 100Kg, the performance can be expected to be almost the same. The crtical factor here will be fuel efficiency. It’s important to note here that even with class leading power, the Swift and the Ritz return a very good fuel efficiency figure. The ARAI fuel efficiency of the Etios sedan (17+ kmpl) sounds promising, and we expect a better figure from the new, smaller engine.

Apart from the petrol engine, both Etios sedan and hatchback will have a diesel option in the form of the 1.4-litre D-4D engine that powers the diesel Altis. However, unlike the Altis, the engine for these smaller cars won’t be available with a variable geometry turbo. A fixed geometry turbo configuration would provide around 70 PS of power to the front wheels of both these cars. The fuel efficiency on the engine for the lighter cars will also be higher than on the Altis. The Altis has a fuel efficiency of 21.4kmpl, the 1.4-diesel on these smaller cars will definitely return a better figure. Also, there is talk of introducing the bigger 1.5-litre engine of the Etios sedan to the Liva hatchback at a later stage for those who value performance.

The space inside the Etios Liva hatchback will remain the same as the Etios sedan, making it, without doubt, the most spacious hatchback in its segment. We are waiting with baited breaths to get hold of the official spec sheet of the Liva hatch, and more importantly, get our hands behind its wheel.