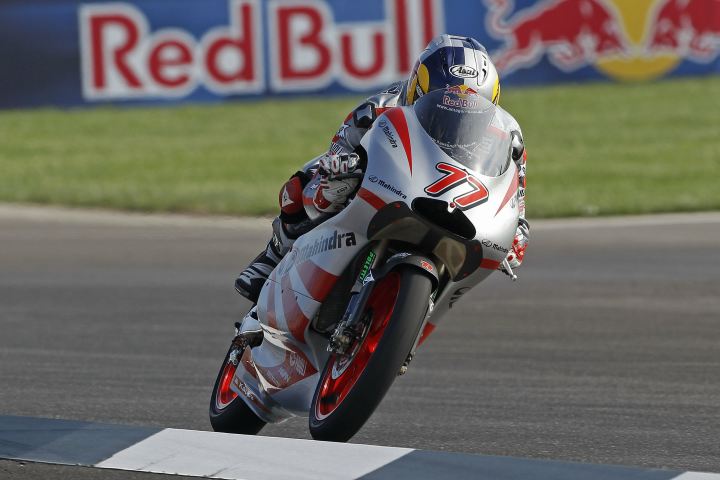 Both Mahindra Racing riders had difficult weekends at the Indianapolis Motor Speedway, with Danny Webb sitting out the 125cc race with a hand injury and Marcel Schrötter crashing on the final lap after being in the points for much of the race.

Danny Webb (20, from England) injured his hand in Saturday morning practice, an injury that affected his performance in qualifying. Having sought medical advice from the Clinica Mobile, Webb decided to sit out the Indianapolis Grand Prix with the hope of being fit for next week’s San Marino Grand Prix in Misano, Italy.

Marcel Schrötter began the race quickly. From 15th on the first lap, the young German rider moved to 14th, then 13th on the fourth of 23 laps. Schrötter was well into the points on the ninth lap when he began to struggle with grip. He eventually fell on the final lap while battling for points.

“Danny wanted to race, but it was better that he didn’t, so we were happy that he joined us in the garage,” said Nicola Casadei, team manager. “Marcel was doing a good job, but we’ll look at all the data to see if we can work out why he was struggling. He was pushing hard for a result at the end so it is a shame he fell. The good thing is we have a race next week in Misano, so we can get back going in the right direction.”

From the start I felt we had made a good improvement on yesterday and I went with the group. But after ten laps or so I was finding the front was trying to close and it was very difficult to ride. I didn’t want to push too hard, but I was still holding my position. Then on the final lap I went down. It’s really a shame, because I think I was up as high as 13th place and with everything that was happening on the last lap I might have been able to finish even higher.

They did an x-ray yesterday, but it was with a portable x-ray machine. They said it wasn’t broken, but all of the doctors at the Clinica Mobile felt around and they seem to think it’s broken. I’ll go home and get an x-ray, go to see my doctor on Wednesday and see what it is from there. See if we can race in Misano or not. I prefer to be fit towards the end of the season, have a good end, rather than come back too quickly. We’ll see what happens. Hopefully I can be ready for Misano. If not we’ll have to wait.