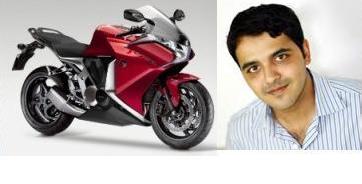 Automatic gearboxes have suddenly burst onto the motorcycling scene, globally as well as locally. Honda has set the international scene ablaze with their Dual Clutch Transmission (DCT). While, back home, we have had the first taste of TVS’ very own T-Matic rotary system. The Indian traffic scenario, with its lethal combination of chock-ablock traffic and potholed roads has been dying for an automatic bike that combines the convenience of an auto ‘box with the comfort of bike’s long suspension. Actually it is pretty surprising that it took such a long time for somebody to realize the need of such a bike, even though it has been almost a decade since the Activa changed the rules of the game. Hell, even I had realized the need for an automatic bike some 5 years back when I wrote a letter to one of the auto-mags urging for some manufacturer to come up with such a product.

Traditionally, the Japanese have never introduced any product that is not based on one of their international offerings and since no such offering exists, expecting such a product from Ho-Su-Ya-Ka is out of the question. Bajaj has never really had its way with automatic scooters, but TVS, on the other hand has tasted significant success with their Scooty brand. So somewhere at the back of my mind I always knew that TVS would be the one. Just last week TVS launched the Jive without much fanfare. It sports a rotary gearbox, the sort that was previously seen on the Hero Honda Street. The Jive is a doodle to ride in the city. Slot it into first, twist the throttle and off you go. The centrifugal clutch engages almost instantaneously without even a hint of fuss or drama. The shifts too are surprisingly quick! And the best thing of all, the bike just doesn’t stall. I tried my best to outsmart the system, but I am happy to report that I failed. The gearbox really is foolproof.

But the TVS Tmatic comes with its own set of flaws. The problem is that while designing any mass volume system it has to be configured such that it should perform reasonable well in all possible scenarios. Hence the engineers always have to compromise between 2 opposing parameters, performance or fuel efficiency, ride or handling and in this case quick shifts or smooth shifts. TVS has gone in for the quick and compromised on the smooth part. Hence the bike jerks around during full throttle upshifts and downshifts. If you happen to be riding with a pillion he will definitely start doubting your skills as a rider after banging the helmets together for the umpteenth time. So while the Jive may be the most comfortable bike for the rider, it ends up being the most uncomfortable for the pillion.

But why not put in a tried and tested CVT from the gearless scooter itself and do away with gear-shifting process altogether? Modern CVTs are not only significantly smoother than a rotary unit, but they are also equally fast, if not faster in the real world. Modern CVTs have become highly fuel efficient as well. The only minor advantage I can see for a rotary gearbox is the ability to downshift for a quick overtake. But in the case of the Jive even that is not a big advantage thanks to the jerky downshifts. Plus the engine gearbox combo in TVS’ own 110 cc scooter, the Wego has turned out really great, definitely better than the Jive’s. The T-Matic might not be perfect, but the fact that TVS actually had the balls to think out-of-the-box is itself worthy of a standing ovation.